On 21 June 2019, Nova Minerals Limited (ASX: NVA) announced the commencement of drilling after the successful and ongoing Induced Polarisation (IP) geophysical survey works at the Oxide prospect on the Estelle Gold Project. Reportedly, to expand the project’s exploration footprint, the surface sampling and mapping program would commence by early July at RPM and Shoeshine prospects. 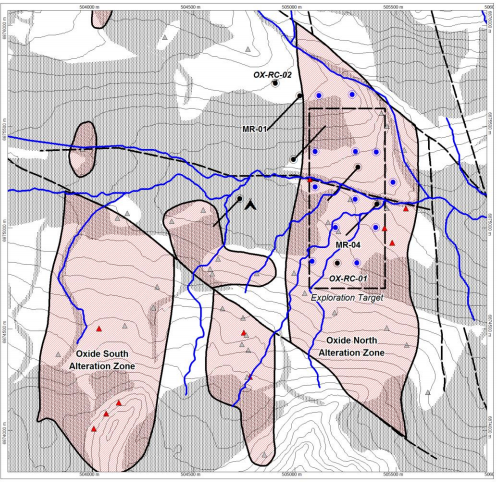 As per the release, given last year’s field season, Mr Tom Bundtzen of Pacific Rim Geological Consulting Inc. identified two high-quality targets while completing a first pass geological mapping of the Oxide occurrences. Importantly, the identified targets comprise of wider envelopes that contain argillic-phyllic to propylitic hydrothermal alteration; these targets were given destinations as Oxide North and Oxide south. Furthermore, Mr Bundtzen collected chip samples, which returned the grades of up to 1.04 g/t Gold having an average grade of 0.183 g/t Gold. It was reported in March 2019, that the Oxide North and Oxide South are located 1300 to 1600 metres along the strike, and width is in the range of 550 to 600 metres while the depth is unknown at this time.

Nova Minerals asserted that the exploration “Project Pipeline” process would be used for exploration strategy to maximise the chances of multiple major discoveries; it defines a specific deliverable for each milestone along with a criterion, which needs to be ticked to determine to the prospect’s move before a new milestone.

Reportedly, sampling and mapping at RPM and Shoeshine would commence in July while drilling work has begun, and IP survey is ongoing on it. Nova Minerals also mentioned that the project had surpassed the previous expectations of the team, and the company would update shareholders on the progress of the project.

On 21 June 2019, AIC Mines Limited (ASX: A1M) announced the results from the 100% owned 4G Hill Prospect at the Marymia Exploration Project in Western Australia. Reportedly, four shallow costeans were mined across the 4G Hill gossan, which was recognised by soil sampling and rock chip sampling. Also, rock chip sample assay results of 387 g/t gold and 230 g/t gold (high-grade) had been reported from the 4G Hill gossan.

AIC Mines collected four composite samples across the exposed gossan surface, which returned the below samples in the table:

It is reported that the exposed 4G Hill gossan is highly ferruginous and shattered quartz vein up to 0.5m thick, formed with a flexure in an iron ore coarse gritty sandstone unit. Host rocks are Sedimentary Iron Formations (SIF), which are part of Copper Hills Schist Belt located along with the northern margin of the Archean Marymia Inlier. Nova believes that the source of gold is not understood yet, and there has been limited gold exploration including, SIF units, which can be traced for over 30 kilometres.

AIC Mines asserted results are promising and clearly warrant follow up. Currently, a detailed interpretation of the airborne magnetic survey is underway to determine the possible structural controls on the location of mineralisation; the interpretation would be utilised while planning the RC drilling program.

AIC Mines Limited operates its 100% owned Marymia Project, which is located 1,200 km NE of Perth in Yilgarn Craton, the project is a prospect for gold and copper mineralisation, along with strategic location within trucking from the Plutonic gold mine and the Degrussa copper mine. The company conducted regional mapping, regional geophysical and geochemical surveys to discover new mineral resources.

On 20 June 2019, Empire Energy Group Limited (ASX: EEG) requested ASX to place the securities of the company on a trading halt due to a pending announcement. Today (on 21 June 2019) Empire Energy released an announcement regarding the sale of its Kansas Assets for US$19.1 million.

Reportedly, Empire Energy has entered into a Purchase and Sale Agreement (PSA) with Mai Oil Operations Inc. (Mai Oil) for the sale of Kansas Assets. Mainly, the sale proceeds would be utilised to reduce the debt of the company to maximum gross debt balance of US$8 million, rest proportion would be utilised for working capital and to promote investment in the Northern Territory shale assets. Empire Energy is expecting to complete the sale process in Q3 2019.

According to the release, the sale would allow Empire to achieve a cash flow positive production from the New York State and Pennsylvania (Appalachia) gas assets, and improvement of the Marcellus Shale and Utica Shale rights in New York State. Also, a competitive tender process with interested parties in Australia and the USA, and the appraisal of expression of interest from multiple parties was completed prior to the execution of PSA.

It is reported that the Empire Energy has reduced the outstanding net debt from US$36.8 million at 30 June 2018 to US$22.6 million, currently through its recapitalisation and debt reduction program. The company asserted that net debt would be reduced to ~US$5 million after the completion of the Kansas sale. As per the release, the cash balance of the company has increased from US$1.1 million (as on 30 June 2018) to ~US$2.8 million (by 30 June 2019). Also, the proceeds from the sale would improve the cash balance to underpin the development plans in Northern Territory.

Reportedly, post the sale of the Kansas assets, Empire Energy would retain the cash flow positive Appalachia gas production assets along with all its interest in the Marcellus and Utica Shale acreage, which is crucial for the New York State gas production. Furthermore, the positive cash flow from Appalachia gas production assets would service the pending debt, while Empire Energy holds the Marcellus Shale and Utica Shale acreage at little to no cost.

Founded in 1949, Mai Oil Operations, Inc. is a privately held oil producer. Mai Oil is primarily focused on the acquisition, exploration and development of oil and gas assets. The company is a family owned business with an industry experience of over six decades.