A global explorer and developer of world-class mineral deposits, Rafaella Resources Limited (ASX: RFR) recently concluded the transformational acquisition of the Santa Comba tin and tungsten project in Spain, which is located in a productive tin and tungsten province. The Company has undertaken significant work on its operations post acquisition.

The Company today released an investor presentation outlining the ways in which the Spanish project is advancing, to be presented by Managing Director Steven Turner at Australia's largest mining event, the International Mining and Resources Conference (IMARC) in Melbourne.

In the presentation, the company highlighted its updated corporate image and logo, which symbolises the refined focus on the Santa Comba Tungsten-Tin Project. The presentation introduces an enhanced corporate strategy for the project including its investment strengths, resource, drilling campaign and path to production.

Why Is Tungsten Tempting?

Tungsten, a strategic metal with no substitute is a lucrative option because of its unique properties and uses, such as - highest melting point and second hardest material after diamond which is used in manufacture of engines, drill bits – tungsten carbide. It also has military applications.

The global production of tungsten is 90,000t WO3 (Tungsten(VI) oxide), where China supplies 80% and consumes 55%. Europe consumes 16,000tpa and produces less than 8,000tpa. Currently, Australia is trying to break China’s metal dominance and is looking for alternative sources.

Tungsten (APT) pricing increased to over US$320/mtu in early 2018 and has since found steady price support at around US$275/mtu.

RFR’s Flagship Santa Comba tungsten mine is permitted for near term production asset and is located in Galicia, north-west Spain. The 10.6km2 massif hosts near surface disseminated ore and granite veinlets and underground narrow vein high grade mineralisation. It has primarily wolframite with some cassiterite (tin) credits and was previously mined between 1980-85 with recoveries of 70% to produce clean 66% WO3 concentrate.

The Company recently announced strong initial drill results from the Project, details of which can be READ HERE. The positive results outlined the intercepting mineralisation outside current MRE and confirmed continuity of tungsten mineralisation.

The Company is focused on achieving sustainability through early cash flows, with operations that support the ongoing working capital and cash flow to fund exploration upside at Project. RFR aspires to strengthen its share price and achieve its timetable (project delivery).

The strengths of the Santa Comba investment include:

Galicia has a strong tradition in mining and the local Santa Comba council is supportive of the Project with the Mayor visiting the mine site in September 2019. The environmental and restoration bond remains in place with Galician administration. Mina Carmen u/g and processing plant site approved in 2012 and o/p mining within quarry area is a huge bonus.

The existing infrastructure remains an important cost advantage to the Project, with sealed roads to port, grid power, tailings dam and offices, workshop and concentrate shed. The pre-existing processing facilities include screens, conveyors and a 100tph jaw crusher. 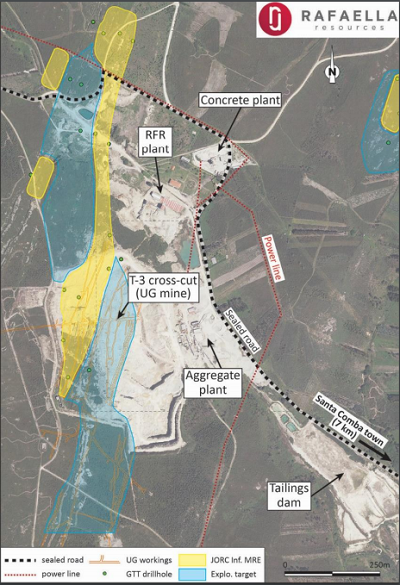 The historical production at the Project was predominantly underground and derived from historical records of 4 main high grade veins. It was open along strike and at depth where the tenor of WO3 increases with depth. The drilling campaign in 2015/2016 confirmed near-surface resource.

The exploration target is in the range of 16.2Mt – 48.6Mt at a grading of 0.15% to 0.23% WO3. The objective of the current drilling campaign is resource definition and resource extension with 8,000 metres/60 holes planned.

Two diamond rigs and one RC rig are currently drilling at site, which commenced within 4 weeks of acquisition (Over 2300m drilled). The current programme is expected to finish by late January 2020.

Why Should RFR Be an Investor’s Pick?

With the rapid developments at the much-awaited Spanish project, and its stock delivering a six-month return of 71.43% (as on 29 October 2019), RFR does seem to be on a growth trajectory:

Besides the Santa Comba tin and tungsten project in Spain, RFR owns projects in Australia and Canada named the Sandstone gold project and the McCleery cobalt and copper project. These were previously under-explored and hold significant potential.