Rafaella Resources Limited (ASX: RFR) is a junior explorer in Australia, focusing on the exploration and development of gold, cobalt, copper and other mineral opportunities. The company got listed on the Australian Securities Exchange in July 2018 and is headquartered in Perth, Western Australia.

RFR is the owner of the Canadian project, namely McCleery cobalt and copper project, in the Yukon Territory. It also holds a 100% stake in a gold project in the state of Western Australia, known as Sandstone. Recently, the company expanded its operations for tungsten and tin development by entering a Heads of Agreement (HoA) for the acquisition of Spanish company Galicia Tin & Tungsten S.L. (GTT), which owns the Santa Comba development project in northwestern Spain. 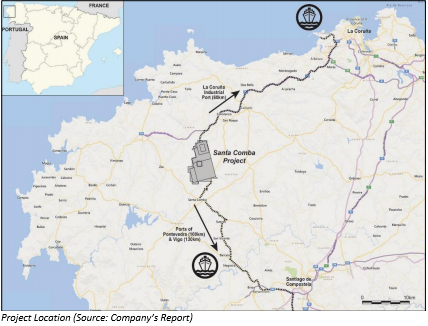 Let us understand more about the acquisition terms and the Santa Comba development project:

Transaction Highlights: RFR updated the market regarding the deal on 27 May 2019. Australian company Biscay Minerals Pty Ltd owns a 75% stake in GTT, while Spanish entity Ulex Recursos SL (together with the vendors) holds the remaining stake. GTT holds 15 granted mining licences, with their validity running until 2068. The licences cover the Santa Comba mineralised granite massif, which spans 7 kilometres.

Under the terms of the HoA, vendors will get access to 17.5 million RFR shares (upon shareholder approval) at a deemed price of $ 0.20 each share. Moreover, in two equal tranches, 30 million additional shares will be issued to the vendors, provided critical value accretive project milestones are met.

The transaction will also cover a share placement at $ 0.20 each share to raise a capital of $ 2.6 million. After the completion of the transaction, RFR intends to invite two GTT representatives Steven Turner and Rober Wrixon to join the Companyâs Board. Post which, Mr. Turner will become RFRâs Managing Director. Steven Turner will be responsible for diligently managing the project and relocate to Spain.

Funds raised from the capital raising will be directed towards a drilling program aimed at upgrading and extending the near-surface resource, as well as a feasibility study to get financing access committed by the government of Germany for the project.

Santa Comba Tungsten and Tin Project: The project is located near the township of Santa Comba in Galicia, which is known as a rich tungsten and tin province and is located in the northwestern region of Spain. The project has already secured permits for underground as well as open-pit mining. It boasts proximity to a sealed road and three deep-water ports. Moreover, the project is located adjacent to an operating quarry and concrete plant. Additionally, an existing process plant is nearing completion. 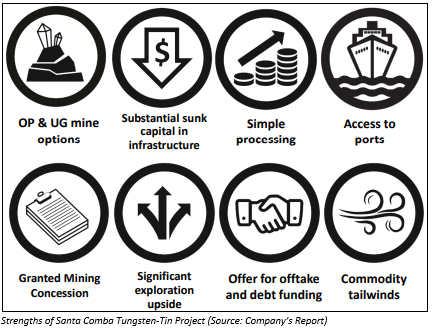 Why this project? Referring to the deal as a transformative one for the company, RFR Executive Director Ashley Hood, stated that the project represents an attractive tungsten opportunity for the company, as it has low entry costs. Moreover, it is expected to result in exceptional returns for shareholders.

Rafaella has already secured an offtake offer from H.C. Stark Tungsten GmbH, in addition to approved associated Untied Loan Guarantee Scheme of up to eleven million Euros from the government of Germany, subject to completion of a positive feasibility study. The company is targeting Santa Comba as a development project, as it believes the project can be fast-tracked to production.

Latest Updates on the Project: On 26 June 2019, RFR unveiled an update regarding the Santa Comba Tungsten Project. As per the announcement, GTT has secured financial and operational support for the project from Transamine Trading SA, which is one of the oldest independent and privately held commodities trading companies in the world.

Based on some conditions, Transamine has reached the deal to purchase 100% of the tungsten and tin concentrate production from the project. This also covers the assistance in relation to the logistics for the delivery of tungsten concentrate to H.C. Stark Tungsten GmbH.

Meanwhile, Hong Kong-based Transamine Holdings and Investments has agreed to support the share placement with a $ 1 million initial commitment and an additional amount of $ 500,000 after the delivery of a positive feasibility study of the project and the grant of any project financing. This means that the company would require to raise the remaining $ 1.6 million of the capital raising from other institutional and sophisticated investors.

Closure of the deals depend on final documentation.

Moreover, on 13 June 2019, the company announced to have defined a near-surface exploration target at the Santa Comba tungsten project. This development backs RFRâs proposed drilling program, which is intended to define extensions to the already defined near-surface JORC Mineral Resource Estimate, as well as aids the company to evaluate the potential prospectivity of the broader Santa Comba massif.

Proposed drilling program: Under the proposed drilling program, the company will target additional near-surface prospects that are amenable to open pit mining. In order to test the exploration target, RFR would undertake nearly 230 drill holes with a total target depth of 23,000 metres (100 metres each for the holes). The drilling program is estimated to be completed in 9-12 months, though the completion would depend on the drilling method followed, number of rigs deployed and drilling performance. 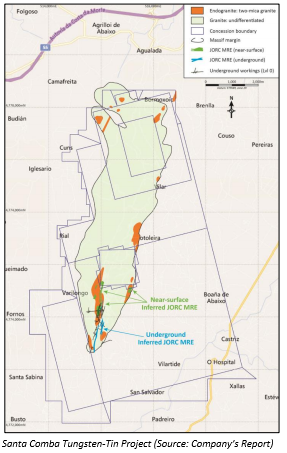 As per the companyâs plan, a staged approach will be followed to test the different near-surface targets. Initially, RFR will focus on extensions to the JORC MRE defined for Quarry and Eliseo prospects, which are being targeted as part of a proposed study into the economic potential of the near-surface mineralisation at Santa Comba.

Tungsten Market & Pricing: A dull silver-coloured metal, tungsten has several applications in sectors like commercial, industrial, oil & gas and military. It has a melting point of 6192Â°F, which is the highest of any pure metal.

Currently, tungsten production across the globe stands at nearly 90,000 tonnes. China accounts for approximately 80% of the supply of global tungsten concentrate and intermediate products, while consuming nearly 55%.

Due to environmental policies in China, the Asian country is curbing tungsten supply. Moreover, China has also unveiled its intention to stop exporting tungsten concentrate.

These developments by China, in addition to the strong recent pricing of the metal, is resulting in increasingly positive global tungsten fundamentals. Several junior companies are signing offtake agreements with end users in the European region, as there is limited supply from non-Chinese nations. In order to supply the existing non-Chinese consumers, tungsten supply from non-Chinese countries needs to triple, and the security of supply is of strategic importance to developed as well as developing economies.