As per the market experts, there is a turnaround transpiring for the growth of tungsten market around the world, after a long span of oversupply and low prices. The fundamentals for the tungsten market are improving as the demand from sectors including industrial, defence, and oil & gas has witnessed an uptick, amidst tightening of environmental policies in China, that curbed supply and added cost pressures for producers.

Tungsten is a greyish-white metal having lustrous appearance and a good corrosion resistance property. It is widely used in its alloy form as pure tungsten is expensive and even difficult for machining.

The largest market for tungsten remains cemented carbide tool materials which caters to automotive applications (both commercial and passenger vehicles) accounting for 25% of the total in 2017. Meanwhile, steels and alloy applications account for the 2nd largest demand for tungsten, followed by other applications. Letâs look at the following four Australia tungsten stocks.

Elementos Limited (ASX: ELT) is an Australian diversified metals company, focused on the development of the Oropesa Tin Project in Spain, the Cleveland Tin, Copper and Tungsten Project in Tasmania and the Temengor Tin Project in Malaysia. With a market cap of AU$ 7.72 million and around 1.54 billion outstanding shares, the ELT stock last traded on 5 June 2019 at AU$ 0.005.

Elementos released an update on 22 May 2019 regarding the completion of first phase of the ore preconcentration performance testing, on a 3 tonne bulk sample from its Oropesa Tin Project. 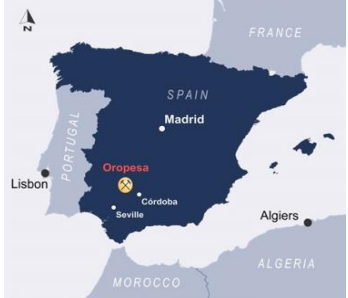 The program results and initial visual inspection of the product along with waste samples indicated occurrence of good separation. The second phase of testing would include detailed chemical analyses with results expected to release in late June.

As per the companyâs March 2019 Quarterly Report, the exploration target was defined at Oropesa Tin Project during the three months, and the company received ~ $148,000 from the Australian Taxation Office with respect to R&D Tax Incentive Claim for the 2017/18 financial year. Besides, Elementos also secured a $ 2 million Loan Facility for a maximum term of 24 months.

Rafaella Resources Limited (ASX: RFR), based in Perth, Australia, is an emerging exploration company, with a key interest in development of gold, cobalt, copper, and other mineral deposits. It wholly-owns the McCleery Project (42 mineral claims covering 9 km2) in the Yukon Territory, Canada; and Sandstone Gold Project on the Gum Creek Greenstone Belt of Western Australia.

On 27 May 2019, Rafaella Resources had informed the market that it had executed a Heads of Agreement for the acquisition of Galicia Tin & Tungsten S.L., which owns the Santa Comba Development Project in north western Spain. The proposed scrip-based purchase will be accompanied by a capital raising (subject to shareholder approval) targeting $ 2.6 million via a share placement at an issue price of 20 cents per share.

In its latest Investor Presentation, Rafaella Resources gave a snapshot of the global outlook for Tungsten demand. 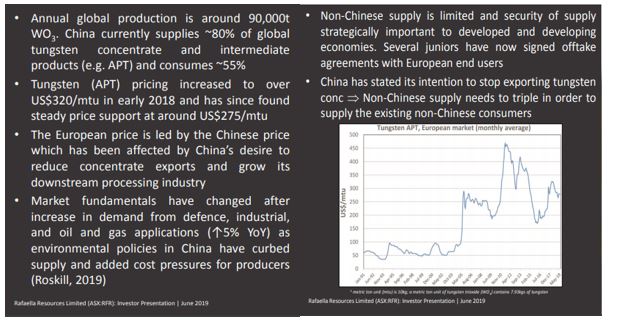 On 15 April 2019, Rafaella Resources announced that it had commenced infill geochemistry at Bonza Bore, a region within its wholly owned Sandstone Project in Western Australia.

Tungsten explorer, Thor Mining PLC (ASX: THR) is quoted on LSEâs Alternative Investment Market (AIM) as well as on Australian Securities Exchange (ASX) in Australia. The company wholly-owns the Molyhil Tungsten Project in the Northern Territory of Australia and holds 40% interest in deposits of tungsten, copper, and vanadium, including an Inferred resource for the Bonya copper deposit at Bonya, adjacent to Molyhil.

Today, 6 June 2019, the Board of the company announced positive assay results from metallurgical bulk sample drilling at its Molyhil tungsten molybdenum deposit in the Northern Territory. Around Two 85mm PQ diamond drill holes were drilled down plunge of the Yacht Club lode to obtain material for production of tungsten and molybdenum concentrate samples for prospective project offtake partners. 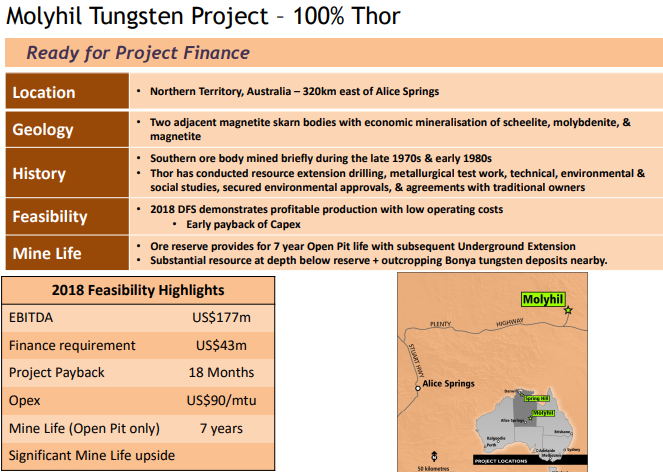 Tungsten Mining NL (ASX: TGN) is an Australia-based resource company engaged in the mining, development, and production of Tungsten in Western Australia. With a market capitalisation of around AU$ 178.58 million and ~ 728.89 million outstanding shares, the TGN stock last traded on 4 June 2019, at AU$ 0.245.

Recently on 3 June 2019, the company announced to have executed an agreement with GWR Group Limited (ASX: GWR) to farm-in to the Hatches Creek Tungsten Project, which consists of two granted exploration licences, EL22912 and EL23462, covering 31.4 km2. The Farm-in Agreement provides for Tungsten Mining to direct and manage exploration and development activities at Hatches Creek where past drilling by GWR had confirmed multiple high-grade polymetallic tungsten prospects with a great potential for a tungsten deposit.

The key terms of the farm-in agreement are listed in the figure below:

Previously on 16 April 2019, the Australian tungsten developer informed the market that it had commenced the work on a Pre-Feasibility Study for large scale operations at the Mt Mulgine Project.

Tags:
ASX: THR ASX: ELT ASX: RFR ASX: TGN
All pictures are copyright to their respective owner(s).Kalkinemedia.com does not claim ownership of any of the pictures displayed on this website unless stated otherwise. Some of the images used on this website are taken from the web and are believed to be in public domain. We have used reasonable efforts to accredit the source (public domain/CC0 status) to where it was found and indicated it below the image.