Rafaella Resources Limited (ASX: RFR) a diversified mining group, has moved from an explorer of gold and copper to a fully permitted brownfield tungsten and tin developer, after the successful and transformational acquisition of Galicia Tin & Tungsten SL, owner of the Santa Comba mining licenses.

Originally focussed on gold, cobalt and copper, RFR has transformed into a tungsten miner. A strategic metal, tungsten has unique properties with no substitutes:

The Annual global production of tungsten is around 90,000 tonnes WO3 (Tungsten(VI) oxide), with China supplying approximately 80% of the global tungsten concentrate and intermediate products and consuming approximately 55%.

The demand and price for tungsten and tin are surging catalysed by the diverse industrial uses in automotive, aerospace, construction and electronics. Its consumption tends to grow in line with the world economy, and particularly in line with the manufacturing sector. From 2011 to 2018, tungsten consumption rose 2.1 per cent a year on average.

The overall tungsten demand is expected to grow at around 1 per cent per year on average over the period to 2030. Prices are expected to recover from 2019 levels and to remain at levels which support steady growth in world mining output.

Tungsten was discovered at Santa Comba far back in 1940. The previous owners commenced the installation of a processing plant in 2012 with an installed crushing capacity of 682ktpa ROM. The Project, situated in northwest Spain near the township of Santa Comba in Galicia, is permitted for open pit and underground mining and covers the 7 km length of the Santa Comba granite massif.

Moreover, the local Santa Comba council is supportive of the project and mining industry for employment and economic benefit. With the environmental and restoration bond in-place with Galician administration, RFR is committed to implementing best-practices in environmental management.

Entering a Heads of Agreement on 27 May 2019, RFR had announced the proposed acquisition of Galicia Tin & Tungsten SL, after completing the due diligence on GTT’s business, assets and operations. The company targeted Santa Comba as a development project capable of being fast tracked to production and is greatly assisted by funding from the German Government.

On 29 July 2019, the company hosted a roadshow to close out the equity raise of $2.6 million at $0.20 per share to complete the acquisition. Transamine Holdings and Investments has already given an initial commitment of $1 million followed by a further $500,000 upon the delivery of a positive Project feasibility study and the grant of any project financing that allows the project to proceed to construction.

After RFR’s shareholders approved the proposed acquisition at a special meeting held on 9 August 2019, the company successfully completed a capital raising of $2.8 million at $0.20 per share in connection with the acquisition, as intimated on 19 August 2019. The funds raised, combined with the cash balance of over $3 million, were an important milestone in executing the acquisition and development of a major tin and tungsten project in Spain.

The acquisition was completed on 27 August 2019, after RFR’s Board confirmed that terms approving the acquisition had been either waived or met.

The company announced that drilling commenced on 16 September 2019, through experienced Spanish contractor, Geonor Sondeos y Peforaciones, S.L. and the Atlas Copco diamond drilling rig was mobilised to the project.

The adjacent Eliseo and Barrilingo prospects will be tested, though the drilling has commenced at the Quarry North prospect.

RFR further aims to increase the number of drilling rigs at the site to as many as four over the coming months, subject to operational constraints.

Completion of the acquisition led to the change in the Board structure of the company. Robert Wrixon is appointed as an Executive Director and Steven Turner is appointed on the Board as a Managing Director. 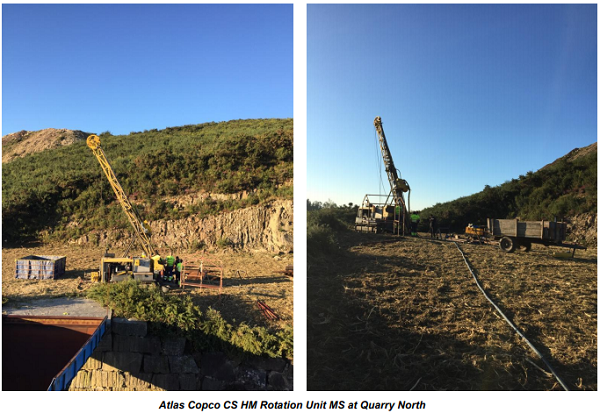 The RFR stock settled the day’s trade at $0.120, with a market capitalisation of $7.75 million and 70.43 million shares outstanding.