The year 2019 turned out to be a successful year for the company, with Musgrave’s positive and extensive lake drilling campaign, the discovery of gold mineralisation at Lake Austin North and the divestment of the base metal interests on the northern Cue tenements.

During the year, the company was busy refining its exploration portfolio, applying for additional tenements in the Cue region and divesting the Corunna Project in South Australia. Exploration and evaluation costs totalling $336,589 were impaired during FY19.

The company intends to maximise its exploration strengths and accelerate drilling across high priority targets including Mainland, Lena, Break of Day and Lake Austin North. Musgrave’s goal is to make high-grade gold discoveries which could support a stand-alone operation or alternatively be mined in partnership with an existing producer.

During the September quarter, the company undertook several exploration activities at the high priority targets to make new gold discoveries and extend the existing resources of the project.

At Lena deposit, a part of Cue Project, the company drilled three Reverse Circulation (RC) and five Diamond Drill (DD) holes to extend the resource down dip at the deposit.

Notable intercepts recorded during the drilling include: 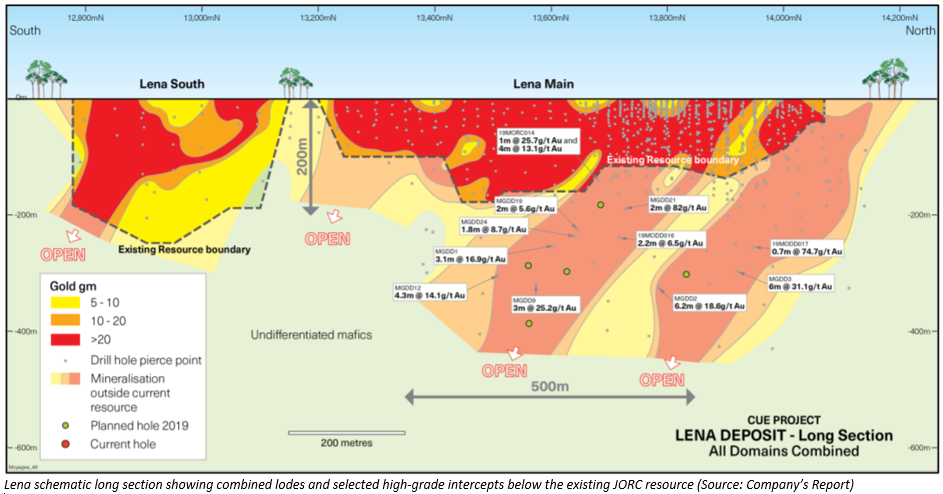 A reassessment of historical drilling data at the Lena deposit has highlighted a 500m long high-grade shoot and the potential to grow the resource at depth.

During the September quarter, the company also undertook additional extensional RC drilling at Break of Day. In the process, various holes successfully intersected high-grade gold outside the current JORC resource boundary. The mineralisation at Break of Day is still open along strike and down plunge.

The company believes that the new intercepts have the potential to extend the Break of Day mineralisation to both the north and south from the current resource. Additional follow-up drilling at Lena and Break of Day is expected to commence in early November.

In March 2019, the company executed an Option Agreement to acquire the Mainland tenements near Cue. During the quarter, Musgrave completed an RC drilling program to initially test three targets at the Mainland area.

Rock-chip sampling over selected areas at Mainland has identified a surface iron-quartz breccia sample that assayed 3,499g/t Au with visible gold obvious in the sample which was discovered in an area with minor historical workings but no historical drilling.

The company expects follow-up drilling at Lena to commence in early November.

At the Lake Austin area which is now the part of the new Evolution Earn-in and Exploration Joint Venture, multiple zones of anomalous regolith gold have been identified. These zones are adjacent to the A-Zone and many of them are still open along strike with further regolith drilling required to define their limits.

The combined basement strike potential of the Lake Austin North system is now over 8km which is equal to ~ 7% of the basement target zone tested to date. This demonstrates the significant upside potential of this gold system and the large financial commitment to exploration required to fully drill test the system’s economic gold potential.

Cyprium Australia Pty Ltd exercised an option to acquire the non-gold rights over the northern base metal tenements at the Cue Project including the Hollandaire deposit, in May 2019. Cyprium can earn an 80% interest in the non-gold rights by spending $2 million in two years.

Notable results during September quarter can be READ HERE.

During the quarter, the company spent $698k on exploration & evaluation activities, while aiming to maintain the same in the subsequent quarter. At the end of the quarter, the company had cash and cash equivalent of $2.65 million, which further increased to $4.7 million (as on 24 October 2019), including $1.5 million received from Evolution share subscription subsequent to the end of the quarter.