The company is engaged in the gold exploration and development at Cue Project, that hosts significant gold resources of 441koz and is situated in the well-endowed, gold producing Murchison region of Western Australia.

The Cue Project consists of Mainland, Lena, Break of Day and Lake Austin North areas, located in the Murchison region. Musgrave has an estimated 440koz of gold in resources on the Cue Project that has total Indicated and Inferred JORC Mineral Resources of 4.83 Mt @ 2.84g/t Au for 440,000 ounces of gold.

Recently, the company reported about the recommencement of Reverse Circulation (RC) drilling at Mainland and further high-grade gold intercepts at Lena, Cue Project. The Mainland area and Lena deposit are 100 per cent owned by Musgrave and are excluded from the $18 million Earn-in and Exploration Joint Venture Agreement with Evolution Mining Ltd (ASX: EVN), that was signed in September this year.

Musgrave recently notified that RC drilling has recommenced at Mainland in areas where it had previously identified high-grade gold. The company mentioned that the drilling program will involve up to 18 RC drill holes for around 1,000m and will take a week to finish before the rig moves to Lena and Break of Day.

Mainland tenements were acquired by the company following the execution of an Option Agreement in March this year.

The company had previously completed an initial Reverse Circulation drilling program and intersected 3m @ 5.4g/t Au from 74m down hole at the Mainland-Consols target. 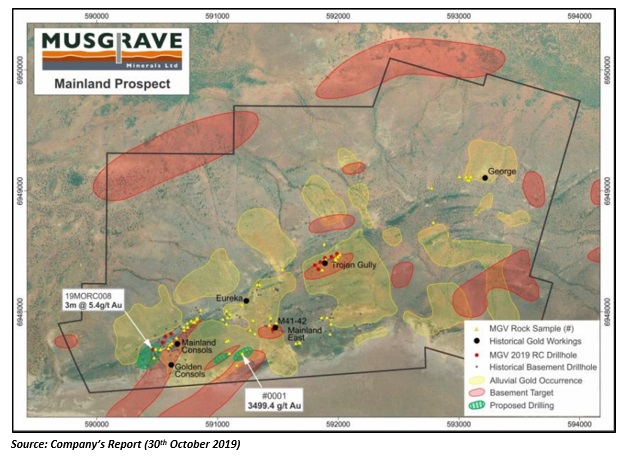 In October this year, the company also reported about the identification of high-grade rock-chip sample in an area with no previous drilling. The rock-chip sampling returned a highly promising ultra-high-grade gold assay outcome of 3,449.4g/t Au from an iron-quartz breccia sample with visible gold.

The company informed that the RC drilling has commenced to follow-up the surface high-grade rock-chip sample discovered in October and the high-grade gold drill results published in August.

The company expects to receive first assays from the follow-up RC drilling at Mainland in late November. It has also planned for additional RC drilling at Break of Day and Lena, following completion of the Mainland program.

Moreover, Musgrave and Evolution are planning to conduct follow-up drilling programs on the new JV area over Lake Austin North and other lake targets where there is a sign of potential large gold system.

As per Mr. Rob Waugh, Musgrave’s Managing Director, “the company is applying modern exploration techniques in the Mainland tenements, which have significant untested gold potential”.

At the Lena deposit, Musgrave has reported further high-grade gold assay results from diamond drilling. Two of the three diamond drill holes - 19MODD021 and 19MODD020 - intersected high-grade gold lodes across potentially minable widths below the current JORC resource boundary and validated the continuity of the mineralisation at depth.

Lena deposit comprises of several gold lodes, with some possessing considerable high-grade potential beneath the present resource. This has been exhibited by these latest assay results. 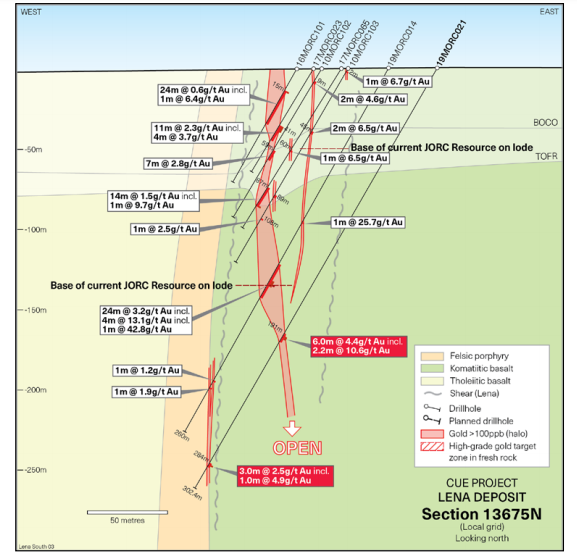 The company mentioned that the new drilling endorses the re-interpretation of historical drill data that detected a southerly fall on the high-grade gold lodes that stay open at depth beneath the current JORC resource boundary.

The company also cited that the diamond drilling program at Lena has improved the geological confidence in the continuity of the mineralisation below the current resource.

The company is planning to include these findings into the geological model to facilitate a re-assessment of the Lena gold resource.

The company has scheduled the commencement of further RC drilling at Lena in early November to deliver a JORC compliant resource update in Q1 2020.

Musgrave believes that there is substantial potential to extend current mineralisation and discover new gold deposits within the Cue Project area. The company intends to explore options to best develop a cost-effective operation, capable of providing robust financial returns for its shareholders.