As announced on Wednesday, 9 October 2019, the follow-up reverse circulation (RC) drilling has returned 3m @ 13.9g/t Au from 53m down hole (19MORC017), including 2m @ 20.0g/t Au from 53m in a potential southern extension to the Break of Day deposit. As per Musgrave?s Managing Director Mr. Rob Waugh, ?this is another strong drilling result extending the high-grade gold mineralisation at Break of Day?.

The intercept is around 75m south of the current resource boundary and remains open down plunge, as depicted in below figure. 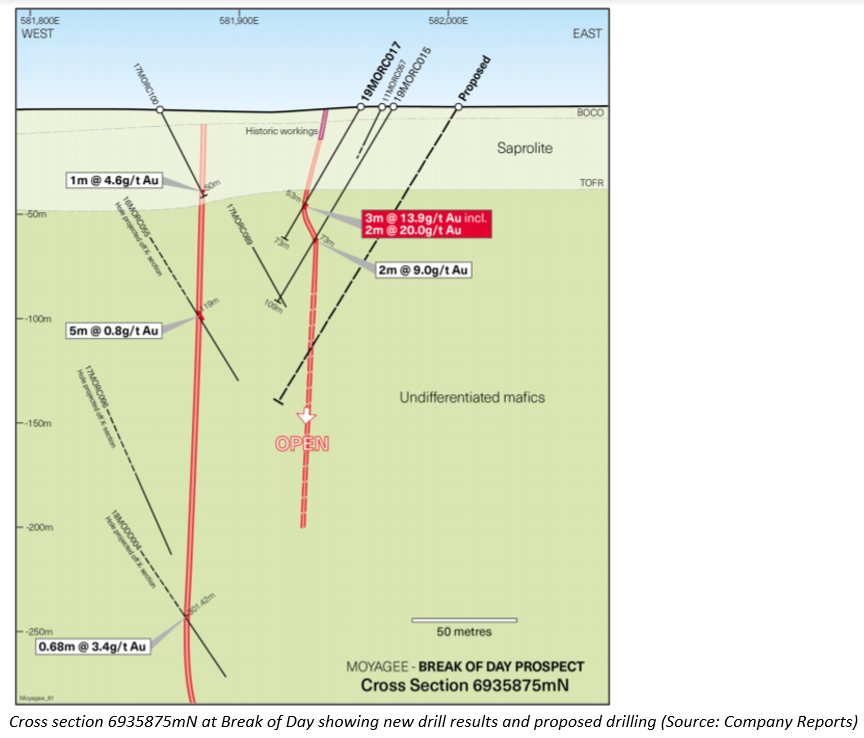 It can be seen from the above figure that the cross section, which is showing new drill results and proposed drilling, is a vertical plane sliced perpendicular to the interpreted strike of the mineralisation.

As per the company, Drill hole 19MODD018 (collared 50m south of 19MORC017) was drilled above the interpreted plunge of the high-grade shoot. The company is required to conduct further drilling to define the limits and continuity of this extensional mineralisation.

A follow-up drilling to test the vertical and lateral extents of these extensional high-grade intercepts is expected to commence in early November.

The company has been conducting earlier-stage exploration activities at the newly acquired Mainland prospect at Cue Project. The Rock-chip sampling at Mainland has returned a highly encouraging ultra-high-grade gold assay result from an iron-quartz breccia sample. The assay result has come from an area of no previous drilling. 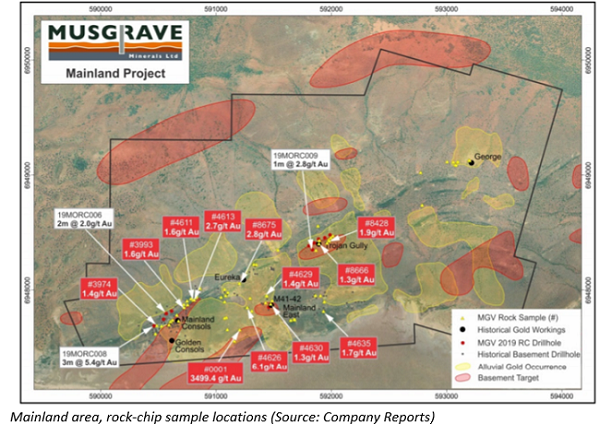 The sample assayed 3,449g/t Au with visible gold obvious in the sample (refer below figure). 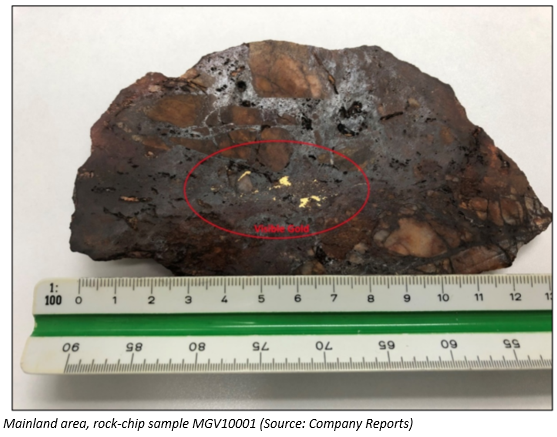 As per Mr. Rob Waugh, the ultra-high-grade rock-chip sample is encouraging as this prospect has never been drilled, highlighting the potential for ultra-high grades in the Mainland area.

The company is currently planning to commence RC follow-up drilling in early November.

Earlier on 24 September 2019, the company had reported high-grade gold assay results from diamond drilling at the Lena deposit which is also a part of the company?s Cue Gold Project.

The intercepts were between 80m and 140m below the current JORC resource estimate. As per Mr. Rob Waugh, these results increases the confidence in the high-grade plunge of the mineralisation at Lena where it remains open at depth.

It is to be noted that Break of Day, Mainland as well as Lena are 100% retained by Musgrave and are not part of the recently announced Evolution Mining Ltd (ASX: EVN) earn-in and exploration joint venture area.

Highlights of the Joint venture Agreement:

Musgrave believes there is substantial potential to discover new gold deposits and extend existing mineralisation within the Project area, as proven by the recent drilling success at Lake Austin North, Lena and Break of Day. The company aims to explore opportunities to best develop a low-cost operation, ensuring strong financial returns for its shareholders.