Real estate sector in Australia is witnessing several changes, with the Reserve Bank of Australia announcing further interest rate cut on 2 July 2019, banking regulator Australian Prudential Regulation Authority (APRA) loosening its lending rules and Liberal-National coalition retaining its power in the May federal election. Over the last couple of years, the Australian property market has lost billions of dollars; however, all these initiatives are likely to stimulate a recovery in the due course.

Let us have a look at what is new in the Australian property market that fuelled the S&P/ASX 200 A-REIT to this upsurge:

Stockland (ASX: SGP), a diversified property group, and Capital Property Group (CPG) have reached a deal concerning Aura, one of the largest master-planned communities in Australia. According to an ASX announcement by SGP on 4 July 2019, it has sold a 50% stake in Aura, located in Caloundra on the Sunshine Coast, to CPG at around 30% premium to book value.

Stockland owns, builds and manages properties, such as business parks, residential communities, shopping centres and logistic centres. The company was established in 1952 and is based out of New South Wales. The company was officially listed on ASX in February 1987.

CPG, which is owned by rich lister Terry Snow, holds an experience of more than 40 years in the development and management of mixed-use properties across multiple asset classes. The company owns and had developed Canberra Airport. Moreover, it has a residential development, named Denman Prospect, in Canberra and a mixed-use project underway in Canberraâs CBD, Constitution Place.

Under the terms of the deal, Stockland will be responsible for managing the development and ongoing delivery of the Aura community. Additionally, it will handle the roll out of infrastructure, as part of its existing agreements with the local and state government.

The company will recognise the accounting profit associated with this transaction in the financial year 2020, partially offset by lower revenue from its reduced interest in the Aura project.

Mark Steinert, Managing Director and CEO of Stockland, mentioning the deal stated that the partnership with Capital Property Group will enable the development of an outstanding new city on the Sunshine Coast. The development will result in best in class schools, sporting facilities, childcare facilities, business parks, retail town centres and affordable homes, in addition to transport, open space and community infrastructure. The deal highlights the companyâs strategy of entering into capital partnerships with players interested in making investments in large-scale projects.

Meanwhile, Capital Property Groupâs Executive Chairman, Terry Snow stated that Sunshine Coast as an exciting growth area of Australia and new international airport development project would result in growth in several industries that are expanding on the coast.

On 04 July 2019, the property industry in Australia experienced another major positive sign. The ANZ/Property Council Survey, which measures consumer sentiment across the commercial and residential industries in Australia, released the results from a survey conducted during May 28 - June 14, reflecting a more positive outlook for the property industry across the country.

Increased confidence in the property market and credit availability are among the main findings of the survey.

The headline index of confidence or the national confidence index in the September quarter jumped by 13 points to 128 from 115 from the survey conducted three months earlier. This increase is also the second biggest leap ever recorded by the survey and above the mark of 100 points which is considered neutral as it separates net optimism from net pessimism. 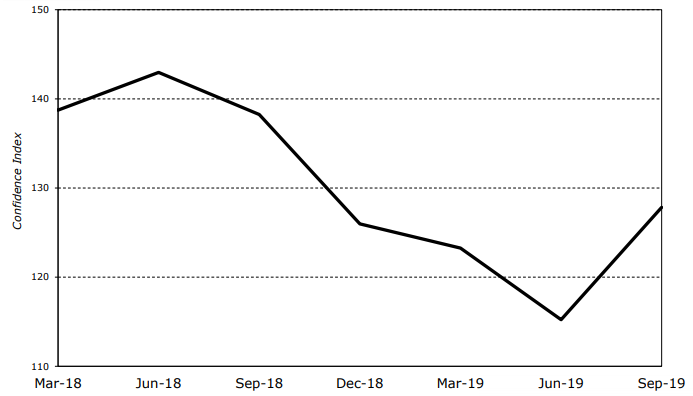 The survey noted that a combination of factors boosted the confidence and sentiment towards the countryâs property market. The positive turn in consumer sentiments towards property markets and credit availability can be attributed to the victory of Prime Minister, Scott Morrison during the federal election held in May 2019, as it resulted in the removal of uncertainty related to the changes planned by the opposition party to negative gearing and capital gains tax breaks. Moreover, lower interest rates and the announcement by banking regulator Australian Prudential Regulation Authority (APRA) regarding easing its mortgage serviceability rules after the poll had a positive impact on the consumer sentiment. The impact of these factors was also reflected in the recent slight recovery in property prices in Sydney and Melbourne. 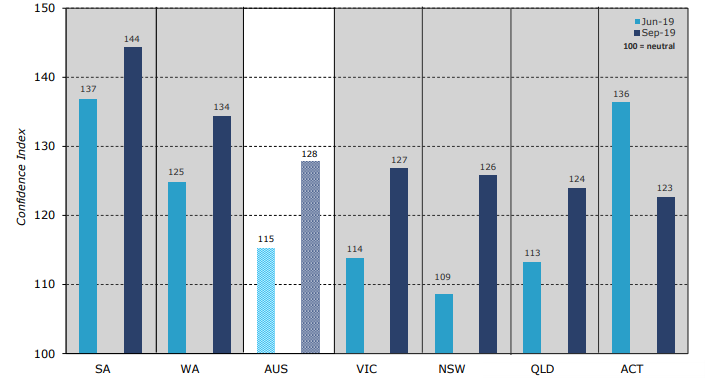 Strong sentiments were reported towards the NSW and South Australia governments of all the state and territory governments across the country, while sentiments towards Queensland government dipped into negative territory for the second consecutive quarter.

Meanwhile, the survey also highlighted a recovery in expectations toward investments by businesses outside mining, forward work schedule, staffing level, national and state economic growth, and capital growth in office and industrial sectors.

Though the survey has highlighted improved confidence across the countryâs property market, there are still some economic challenges that the sector might experience, according to the Property Council of Australia Chief Executive Ken Morrison. Several state administrations have introduced investment-sapping tax upsurges, while budgets of the state governments in Queensland region, situated in Victoria and South Australia have resulted in arbitrary and incompetently designed tax surges for the property sector. All these factors could affect the current sentiment turnaround, said Ken Morrison.

A brief on ANZ/Property Council Survey:

The survey, which was started in 2011, was conducted with 980 respondents which included property developers, property owners, property managers, real-estate agents, service providers and consultants. The ANZ/Property Council Survey focuses on the countryâs property industry and evaluates:

The shift in sentiment towards property market in Australia as highlighted by the survey is expected to encourage national policy makers, as well as the Reserve Bank of Australia to come up with new policy changes and other initiatives to drive the economic growth in the country.