As per the media reports, the company’s former client, Mr David Hall, who is 66 years old, raised his concern regarding his conflict with Evans Dixon to the financial ombudsman. The Head of the company has assured all its clients that it has served in the best interest for its clients when it guided them to invest in its in-house funds. The reports further stated that few former and present clients of the company have also claimed that the company placed its interest first by recommending its own investment products, which has lost its value by a significant percentage.

Many brokerage houses have now regarded Evans Dixon into the high-risk investment category for the long term. The company’s share tumbled over 8% by 11:19 PM at $0.84 but showed some recovery by 12:00 PM. 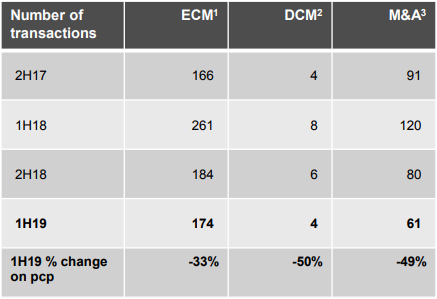 The company recently issued new 2,133,169 Fully paid ordinary shares ranking equally in all respects with existing fully paid ordinary shares, at an issue price of $1.2868 per share, calculated as the volume weighted average price (VWAP) over the 10 trading days ending 30th May 2019 in accordance with the Loan Funded Share Plan Rules, effective from May 31, 2019.

In another update, Evans Dixon provided information on its business and financial performance for the second half of the financial year ending on June 30, 2019 (H2FY19). It highlighted that its core business continues to perform well, however, its financial performance was impacted by several factors, predominantly related to a reduction in transactional revenue in each of the divisions. It consists of impact on transactional revenue in each of Evans Dixon’s three business divisions due to the impact of lower capital markets activity across the entire market, including the number of transactions expected to complete prior to June 30, 2019, that were either delayed or cancelled. It also includes the impact of lower activity and issuance levels within real asset funds, leading to a reduction in transaction-based fees and a rise in expenses due to increased investment in its risk and compliance infrastructure and one-off costs associated with the successful listing of the US Solar Fund on the London Stock Exchange (LSE).

The company anticipates delivering earnings before interest, tax, depreciation, and amortization (EBITDA) in the range of $35 million to $38 million for its financial year 2019. This result would be subject to transaction completion rates, market volatility and any potential timing differences at period end. Evans Dixon has confirmed its intention to pay a full year dividend within its targeted range of 75%-85% of underlying NPATA. It further aims to focus on key initiatives to reduce costs of operations without influencing the compliance and risk functions of the company.

Evans Dixon witnessed growth in the underlying drivers of its recurring revenue base with funds under management (FUM) and funds under advice (FUA) both up by 13% for the 4 months to April 30, 2019. It was supported by net new client growth, positive investment markets and new fund raisings. The institutional and corporate business continued to perform well with the completion of several Merger and Acquisition activities (M&A) and ECM transactions and a market share gain in the institutional equities. It can be supported by the fact that in the 4 months period to April 30, 2019, Australian market M&A deal numbers and ECM transactions were down by 77% and 29%, respectively, as compared to the previous corresponding period, excluding initial public offerings (IPO) under $20 million, secondary raisings under $4 million and M&A transactions under $10 million.

H1FY19 (ended on December 31, 2019) Financial Performance: The group’s underlying EBITDA increased by 6% pcp to $23.3 million, wherein corporate and institutional contribution increased by 30% pcp to $13.4 million, wealth advisory contribution decreased by 21% pcp to $7.6 million, and funds management contribution decreased by 17% pcp to $9 million. The statutory net profit after tax (NPAT) for the period decreased by 9% pcp to $12.4 million, impacted by an increase in the effective tax rate. The underlying earnings per share (EPS) decreased from 7 cents in H1 FY18 to 6.8 cents in H1 FY19. Its dividend per share was reported at 5 cents fully franked, which is in line to the previous corresponding period. Its net cash balance was reported at $52.5 million at the end of December 31, 2019. Despite challenging markets, its funds under management (FUM) and funds under advice (FUA) increased by 14% and 1% as compared to the prior period.

As per its key achievements and initiatives in the period, the company successfully expanded and rebranded Evans Dixon’s corporate and institutional business with integration of Fort Street Advisors. It helped the company in broadening its range of capital markets, institutional trading, equities research, and corporate advisory.

Outlook: As per the company reports, Evans Dixon has made a solid start to its H2FY19. It has maintained a good transaction pipeline in its corporate and institutional business. However, the quantum of M&A deal completions in H1 FY19 is not expected to repeat in H2 FY19. The company is committed to its strategy and ongoing investments in the people and technology by remaining focused toward achieving its goals.