Emerging gold explorer and aspiring gold miner, Cervantes Corporation Limited (ASX: CVS) is involved in identifying opportunities in mining areas that have been overlooked by previous explorers. The company has developed a portfolio of gold properties in traditionally producing and well-known gold districts with a strategy to apply unique development and exploration thinking.

Cervantes holds a strong portfolio of projects in Western Australia, including Albury Heath Gold, Primrose Gold and Abbotts Gold. So far, the company has made substantial progress with its projects that have recently undergone surface geochemical sampling. Let us take a look at the results of the soil sampling survey conducted at the company’s projects below: 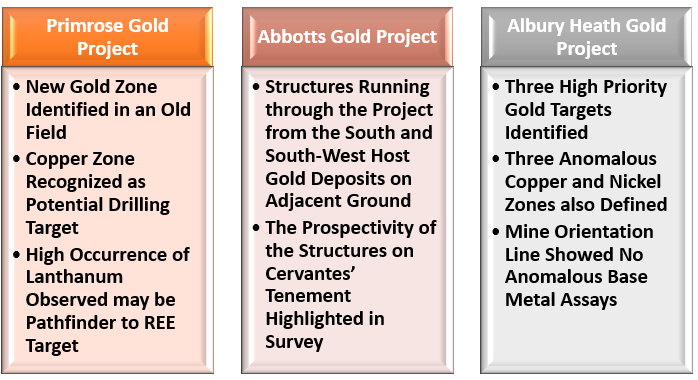 Cervantes’ considerable progress in the exploration and development of project areas has been backed by an efficient and strong management team that provides confidence in the ability of the company to sustain the projects development.

The company possesses a sound management team with extensive experience, which includes the following members: 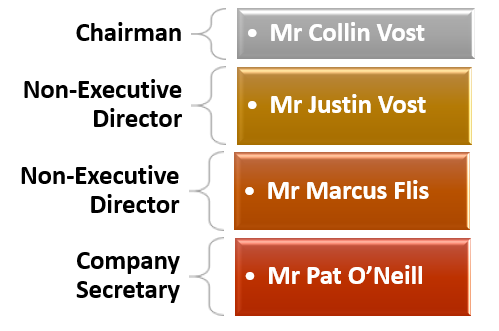 Mr Collin Vost has worked at several public companies for more than 20 years. He was appointed to the Board of Cervantes on 9th October 2007. He also played a key role at the time of raising capital to recapitalise the company in mid-2007. He holds Diploma of Financial Services Licenced Securities Dealer.

Mr Vost has served on the Board of numerous, generally junior resource companies. He has been engaged in the securities dealing business since 2001. He now operates his own securities dealing firm (New York Securities Pty Ltd) under his own financial securities license.

Mr Vost has previously held Directorships in the following entities:

Mr Justin Vost joined the Cervantes’ Board as the Non-Executive Director on 23rd November 2011. He holds extensive experience in mining, manufacturing and capital markets within Australia & overseas. He holds Diploma of Financial Markets and is presently engaged in the capital markets.

Mr Flis was appointed to the company’s Board as the Non-Executive Director. He holds graduate and a master’s degree in geology and geophysics. He has been a fellow of the Australasian Institute of Mining and Metallurgy. Mr Flis possesses experience of more than 35 years in multi-commodity exploration, including sedimentary hosted gold in the WA Proterozoic, substantial stints in gold exploration in classic Archaean Eastern Goldfields setting, alluvial gold in NZ and VMS-related gold in Indonesia and Greece.

He has held the Exploration Manager position in both small and large listed companies, including and Iron Ore Company of Canada, Royal Resources and Rio Tinto.

It can be inferred that the company possesses a well-qualified and skilled management team that has considerable experience in their respective fields. The company’s strong and robust management team has been a major contributory factor in its speedy progress.

Let us now take a quick look at the financial performance of the company:

Cervantes is vigorously pursuing capital investment by interested parties to expand and expedite the exploration of its existing and new projects. The company has recently raised a capital of $150,000 and is considering raising further equity capital through a Placement of shares and options.

CLICK HERE FOR YOUR FREE REPORT!
Tags:
Mining ASX: CVS
All pictures are copyright to their respective owner(s).Kalkinemedia.com does not claim ownership of any of the pictures displayed on this website unless stated otherwise. Some of the images used on this website are taken from the web and are believed to be in public domain. We have used reasonable efforts to accredit the source (public domain/CC0 status) to where it was found and indicated it below the image.