The Australian-headquartered gold and base metal exploration firm, Cervantes Corporation Limited (ASX: CVS) was initially engaged in Lobster fishing, sales and processing industry. The company acquired exploration project areas in Western Australia following the receipt of formal approval from ASX for the transition into an exploration firm. Cervantes has now built up a portfolio of gold properties in renowned and traditionally producing gold regions with an approach to implement novel exploration and development thinking.

Recently, the emerging gold explorer released its quarterly activities report for the three months-period ending 30th June 2019. Let us take a deep dive into the activities undertaken by Cervantes during the June 2019 quarter at its key projects:

During the quarter, the company announced the results of its recently conducted drilling campaign and updated resource estimate for the gold deposit. The second round of RC drilling involved the drilling of seven RC drill holes, drilled for 440 metres.

This follow-up drilling was designed to examine the extent of two high grade gold zones which were previously reported by the company, including:

A follow-up drilling was undertaken during the June quarter with the additional drilling data (mentioned above) which demonstrated that, whilst the lode zones are mostly continuous, the gold grades have shown to be variable. Accordingly, the company decided to categorise the entire resource as the Inferred Resource, as shown in the below table:

Subsequent to the June quarter, Cervantes reported the assay results of the regional soil sampling survey conducted at the Albury Heath Project to undertake a first-pass sampling over the six regional targets identified through remote sensing and aeromagnetic interpretation. The samples were assayed utilising the MMI technique, and an orientation line (a SE-NW orientation) was collected on the local grid. The company detected 3 high priority gold targets from the soil sampling survey carried out at specific target areas. CVS also observed noteworthy nickel and copper anomalies. 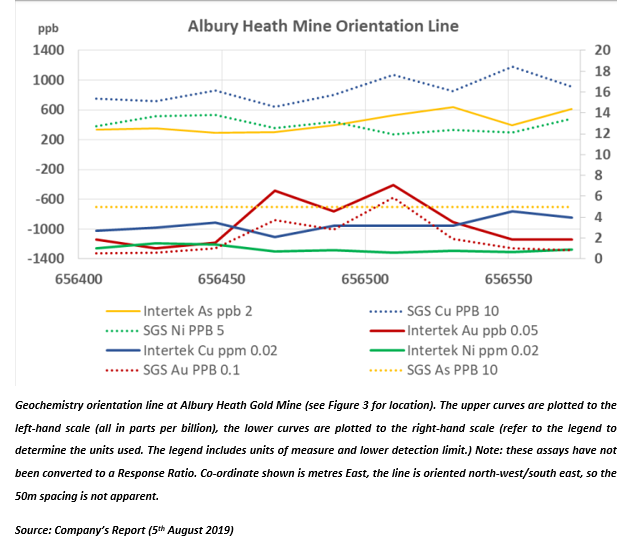 Located within the Abbotts Greenstone Belt, the Abbotts Gold Project covers an area of ~52.3 sq. km. The project consists of EL51/1721 tenement, located at around 22 kilometres north-north-west of Meekatharra in the Murchison Province of WA.

The gold deposits occur throughout the Abbotts Greenstone Belt; however, none of the deposit has yet been discovered in the inadequately explored section of the belt Cervantes controls. The belt is yet to offer an exceptional gold deposit typical of neighbouring belts.

During the June 2019 quarter, the company reported the assay results of the regional soil sampling survey undertaken by Cervantes across the southern portion of E51/1721. The surface soil geochemistry assays highlighted the prospectivity of structures running through the Abbotts Project from the south and south-west on Cervantes’ tenement.

The Abbotts soil sediment survey defined five anomalous zones of gold, copper, and nickel. Four of these zones were intimately linked with shears or faults striking from the south against the company’s ground. These faults and shears were considered prospective for gold as they have been known for gold mineralisation off Cervantes’ ground.

The soil sampling survey was conducted to undertake a first-pass sampling over the width of the tenement to examine several potentially gold-bearing structures that are interpreted to strike onto the company’s ground from the south, to establish a base geochemical signature for the lithologies sampled over the area and test the mobile ion technique in the area.

The company will undertake field checking and geological mapping further to prioritise potential drilling targets. The company informed that Ora Gold Ltd is conducting extensive exploration to the immediate west and south of Cervantes’ Abbotts Project and it will be following Ora Gold’s progress with interest.

During the June 2019 quarter, surface geochemical sampling was carried out at Primrose Project to detect additional areas as a prelude to drill hole placement. The results of the soil sampling survey were announced in August 2019 that highlighted the identification of a new gold zone in an old field and recognition of copper zone as potential drilling target. The company mentioned that the high occurrence of lanthanum in the sampled areas might be a pathfinder to Rare Earth Element target.

Cervantes raised $150,000 of capital during the quarter and is in advanced discussions with other parties for additional capital raising. The company is planning to raise further capital through the issue of up to 75 million shares and ~46.7 million Options to support its exploration activities.

Cervantes spent AUD 27k on payments for exploration & evaluation during the June 2019 quarter and expects to further spend AUD 35k on the same during the next quarter. The company reported the cash and cash equivalents of AUD 114k at the end of the period.

Decades of neglect by previous explorers has delivered an opportunity to Cervantes for the discovery of potential deposits. Cervantes is prospering well with its robust project portfolio by identifying numerous opportunities in overlooked mining areas.

CLICK HERE FOR YOUR FREE REPORT!
Tags:
Mining ASX: CVS
All pictures are copyright to their respective owner(s).Kalkinemedia.com does not claim ownership of any of the pictures displayed on this website unless stated otherwise. Some of the images used on this website are taken from the web and are believed to be in public domain. We have used reasonable efforts to accredit the source (public domain/CC0 status) to where it was found and indicated it below the image.