Emerging gold explorer, Cervantes Corporation Limited (ASX: CVS) has created a portfolio of gold properties in formerly producing and popular gold districts with a strategy to implement novel development and exploration thinking. The company has also detected opportunities in those gold districts which were neglected by earlier explorers. Cervantes is committed to maximising shareholder returns via the development of those identified opportunities. The company has three significant projects including the Primrose Project, the Albury Heath Gold Project and the Abbots Project.

The company has released an update on its Primrose Project through the ASX announcement. The Primrose Project covers more than 8 kilometres of the highly mineralised (gold) Primrose Shear in the Western Australia’s Murchison District of the Eastern Goldfields. The update mentioned that the soil survey conducted at the Primrose project has identified gold and copper targets. 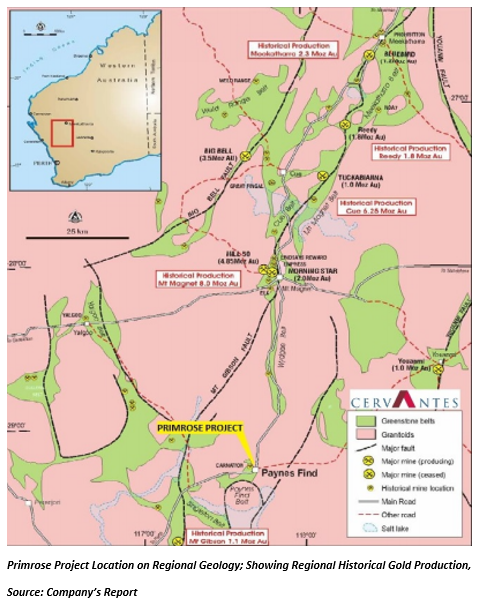 The company undertook surface geochemical sampling in five areas of the project to receive profiles across an interpreted southern felsic intrusion and test the inadequately explored western Paynes Find Intrusive. The sampling was conducted by HGS contractors with the help of their QA/QC protocols and standard sampling procedures, and the samples were firstly submitted to Intertek’s laboratory in Perth for assay.

The soil sampling was wholly located within Prospecting Licences P59/1941, P59/2159 to P59/2160. Cervantes provided positive exploration results for gold as well as essential elements of battery industry including Lanthanum, Cobalt, Copper and Nickel over the entire permits. Let us take a look at the results for each one of these elements:

The mobile ion soil geochemistry survey has also demonstrated that the western contact of the mafic unit connected with the Paynes Find Gold Field might have the gold mineralisation potential.

Copper followed the similar pattern of gold; however, it was more active in the Paynes Find Intrusive (for instance in western edge of P59/2161).

Nickel seemed to be more extensively anomalous, probably reflecting the scavenging characteristic of laterites generated over the area. Even so, anomalous zones on the southern two lines sampled on P59/2159 echo RAB and AC drilling results to the immediate east, upgrading this area as a drilling target.

Lanthanum appeared to be particularly anomalous on the northern two areas sampled on P59/2159. Pegmatites were already known in these permits while the previous explorer, Paynes Find Gold restrained follow-up work on them. The secondary targets for lanthanum and copper (and associated REE) will be worked up with subsequent field mapping.

All the areas on which soil sampling was carried out were sampled along two, 200 metres spaced lines except for one where samples were collected along three lines. The samples were taken at 50 metres of intervals. The collected samples were delivered for examination using Intertek’s Terraleach process, a partial leach technique that aims to assay for mobile ions (MI) which are just softly attached to the surfaces of soil particles and have migrated to the surface.

The company informed that the resulting assays might change by adjusting leach times and are not an absolute assay as they are based on a partial leach method. 90th percentile was used in the survey as the background limit for Lanthanum and 75th percentile was chosen for gold, copper, and nickel in the Primrose area. The percentiles chosen were very high and thus reflected the ubiquitous mineralisation.

The following intercepts were obtained from the air core sampling campaign:

Post the completion of the air core sampling campaign, a field inspection was conducted by two Directors of Cervantes at the Primrose Project whose structural observations supported the company’s model for a large tonnage gold target.

Cervantes is actively pursuing capital investment by interested parties to expedite and expand the exploration of its new and existing projects. The company raised $150,000 during the June 2019 quarter and is holding further discussions with other parties to raise additional capital. During the quarter, the company issued 37,500,000 shares (issue price of $0.004 per share) and 18,750,000 Options (at an exercise price of $0.01 per Option) for raising a capital of $150,000. The funds raised from this issue were used for continued assessment and exploration of resources projects and working capital.

Subject to shareholder approval, the company is planning to raise additional capital through:

Cervantes intends to use the funds raised from the proceeds for work on the Company’s current permits, continued exploration and assessment of resources projects, acquisition of assets if required, payments to providers of services to the company and general working capital requirements.