Catch A Sight Of Gold Explorer Cervantes’ Project Developments in 2019

Australian-headquartered base metal and gold explorer, Cervantes Corporation (ASX: CVS) has developed a significant portfolio of gold properties in renowned gold districts that were neglected by previous explorers. The company applies its innovative exploration and development thinking to maximise shareholder value via the development of opportunities identified in overlooked areas.

Cervantes holds three key projects in Western Australia, including Primrose, Albury Heath Gold and Abbotts Projects. So far, the company has made substantial developments in 2019 by carrying out extensive exploration activities at project areas.

Let us dig deeper into the developments carried out by Cervantes at its three projects in 2019:

Cervantes reported robust results from the surface geochemical sampling conducted at all three of its projects in 2019. The sampling was undertaken by HGS contractors by means of their standard sampling procedures and QA/QC protocols, and all the samples were submitted for assay using Intertek’s Terraleach process. The company did not conduct any drilling for collecting samples; rather it picked the samples directly from the soil profile at 50m intervals.

Cervantes conducted the surface geochemical sampling at the Primrose Gold Project in five areas that were detected and underlined from the aeromagnetic interpretation of the area. The company reported promising assays but mentioned that the resulting assays might change by adjusting leach times. The company chose 75th percentile as the background limit for gold, copper, and nickel, while 90th percentile for Lanthanum.

Gold was found to be highly anomalous near the western contact of the mafic schist in the surface geochemical sampling on P59/2160 and towards north on P59/2159. Both of them were the newly identified gold zones that have never been drilled previously. The company recognized copper zone as a possible drilling target and found a high occurrence of lanthanum that might become a pathfinder to REE target.

Lying within the Abbotts Greenstone Belt, the Abbotts Gold Project consists of tenement EL51/1721 that covers an area of around 52.3 sq. km. The tenement is situated at around 22 kilometres to the N-NW of Meekatharra in the Murchison Province of WA.

In June this year, Cervantes notified about the results of regional soil sampling survey conducted at Abbotts Gold Project. The soil survey was undertaken on five traverses, and four lines of samples were provided for assay using Intertek’s Terraleach process. Cervantes chose 25th percentile as the background limit for the Abbotts soil sediment survey that defined numerous anomalous zones. 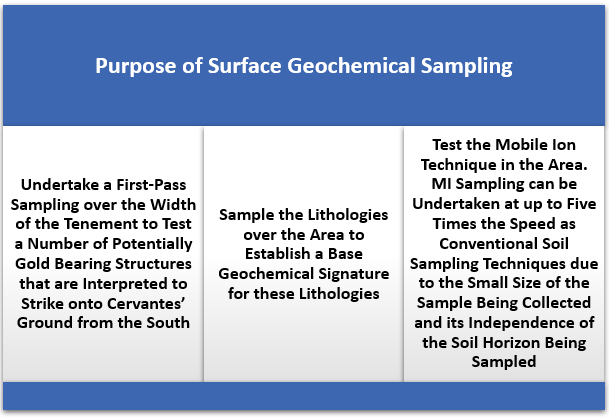 The gold deposits occur throughout the Abbotts Greenstone Belt; however, none has yet been uncovered in the weakly explored section of the Greenstone Belt Cervantes controls. The belt is yet to deliver a world-class gold deposit typical of neighbouring belts. In the regional soil sampling survey, the prospectivity was highlighted on Cervantes’ tenement for the structures passing via the Project from the south-west and south host gold deposits on adjacent ground.

Centred on the historic Albury Heath Gold Mine whose Prospecting Licence was acquired by Cervantes in October 2016; the Albury Heath Project is located at around 23km to the South East of Meekatharra in Western Australia.

Cervantes has recently announced the surface geochemical sampling results for the Albury Heath Gold Project that comprises of tenements - P51/2937 and P51/2997 – 3001. The company conducted a regional soil sampling survey over six regional zones recognized via aeromagnetic interpretation. The survey was undertaken on 13 traverses, and the company chose 50th percentile as the background limit for gold and 25 per cent for nickel and copper. 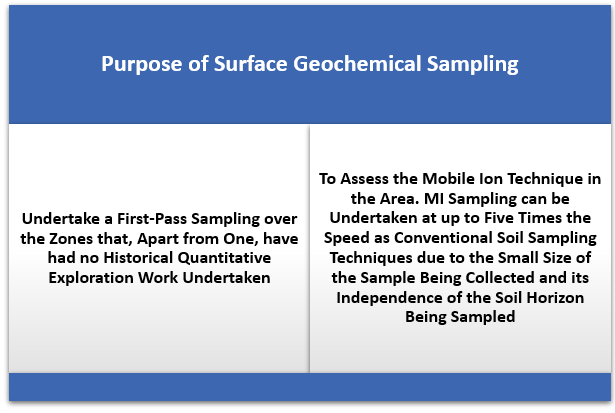 Cervantes detected three high priority gold targets, and three noteworthy anomalous copper and nickel zones from the soil survey. An Albury Heath Mine Orientation line was also collected on the local grid that showed no anomalous base metal assays, at odds with the anomalous values seen elsewhere.

In March 2019, the company released results of its latest drilling campaign and updated about the resource estimate for Albury Heath gold deposit. Cervantes informed that the second drilling campaign has been completed at Albury Heath, and notable intercepts have been determined from the drilling activity which include:

The company also mentioned that Albury Heath Mine Inferred Resource has improved to 23,740 ounces (with 17.95g/t gold top cut) and 35,500 ounces (uncut). The company categorised the entire resource as Inferred based on the gold grade variability.

In January this year, the company also informed about the completion of two previously unrecognized bonanza-grade gold zones at the Albury Heath Prospect. The drill testing of gold zones at Albury Heath were found to intersect impressive quartz lodes of up to 26m downhole width.

The drill testing involved testing of seven holes for ~440 metres to test the extent of two newly discovered gold zones:

Cervantes continues to evaluate submissions of numerous projects within Western Australia in several commodities, including vanadium, gold and lithium. The company is also actively seeking capital investment by interested parties to accelerate and expand the exploration of its current and new projects.