The Australian Bureau of Statistics today released data on one of the most prominent macro-economic indicators ‘Inflation’. The inflation data missed estimates, and the headline consumer price index (CPI) remained unchanged in the March quarter 2019. There was no movement in CPI as the rises in the prices of goods and services were neutralised by the number of price falls.

The CPI saw an annual increase of only 1.3% through the year to the March quarter 2019 while it increased 1.8% in the year to December last year. The flat effect was a result of sharp falls in housing costs and fuel prices counterbalancing the higher costs for vegetables, fruit and education. 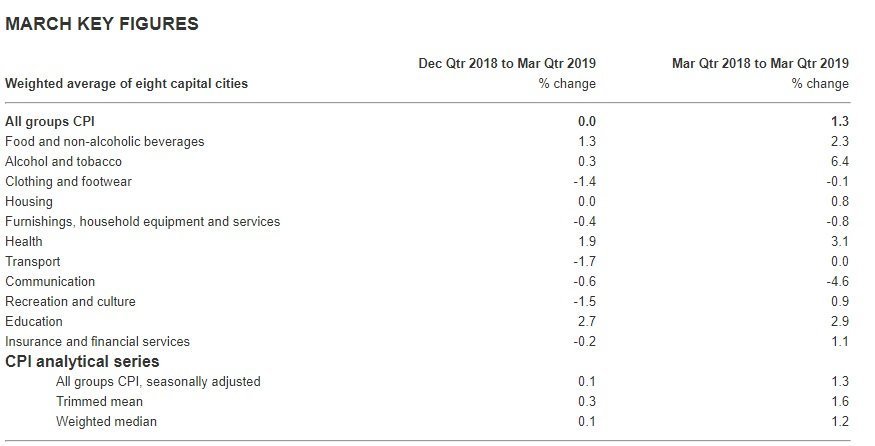 The market analysts were expecting a 0.2% rise in headline inflation in March Quarter 2019 and 1.5% increase in year-ended rate. The trimmed mean gauge rose 0.3%, missing the 0.4% rise predicted by economists.

As the inflation data missed the target, speculations about the interest rate cut by the Reserve Bank of Australia (RBA) have become stronger. The key measures of underlying inflation selected by the RBA averaged around 1.4 per cent for the year, lower than the central bank's target range of 2-3 per cent.

Economists are now forecasting a cut of 25 basis points in the cash rate in scheduled May meeting by RBA post the disappointing inflation data.

The Australian dollar also dropped by 0.9 per cent, to 70.36 U.S. cents. According to Mr Nick Twidale, chief operating officer at Rakuten Securities Australia Pty., further pressure can be witnessed on the Australian dollar in the coming days as CPI data is an important indicator for RBA.

According to Ben Udy, Economist at Capital Economics, it was expected that RBA would wait for a further slowdown in economic activity before taking a decision to cut interest rates in August. But now the outlook appears to be similar of early 2016 when the interest rates were cut despite substantial improvements in the labor market.

But the question arises that “Is the zero rate of inflation good for a country?” And the answer is “No”.

As witnessed in 1970s and 1980s when there was uncontrolled inflation, people lost their homes due to higher interest rates and leaping wages.

But the lower inflation also has its own problems. Low inflation fuels inequality as the wages also fall, and this wage crisis threatens stability. History suggests that financial institutions and wealthy population could borrow and invest in long-term assets, but a common man is left with no cash and face stagnant wage growth. The low wages also contribute to small savings for retirement.