For exploration companies, the first mover advantage in lucrative regions is a huge benefit, securing the best terms and acreage with the most lucrative markets. When supported by the region’s urgent need of certain inventions and furthermore, a pro-business government promoting foreign investment and supporting investor friendly reforms, these companies are likely to do well.

In this backdrop, we present to you an ASX-listed independent oil and gas exploration company - Invictus energy (ASX:IVZ), which is leveraging from all of the above. The Company is currently focused on high impact energy resources in sub-Saharan Africa, where energy crisis is a growing concern with deteriorating gas supplies from onshore Mozambique and offshore Mossel Bay, along with a lack of supply alternatives.

Currently, South Africa remains short of gas and is facing an energy crisis and increasing shortages of electricity, consequently hampering industry and investment. To curb the crisis, Southern African Power Pool (SAPP) was established in 1993 to enable cross-border electricity trading between states, with Zimbabwe being the spine and offering access to other member states.

IVZ is the 80% owner and operator of the Cabora Bassa Project, which comprises of the SG 4571 exploration licence in northern Zimbabwe. The licence contains potentially the largest, seismically defined, undrilled structure onshore Africa, with 8.2 Tcf + 249 million bbls of conventional gas-condensate in the Project’s Mzarabani Prospect alone.

So, how does IVZ plan to address South Africa’s energy crisis via its lucrative Cabora Bassa Project?

The answer is simple- by building a portfolio of high potential oil and gas assets and supporting the development of the region and communities. IVZ aims to work on under-explored/ emerging assets with low cost entry that can be de-risked through technical work and farmed out on good terms, before larger companies tap them.

IVZ has been successful in unlocking $30 million worth dataset via application of modern technology in the high potential acreage. Moreover, the geophysical and geological results have been encouraging and illustrate the de-risking of the acreage - ingredients for working petroleum system present in the basin.

In FY19, IVZ focused on the technical work program of the Basin’s petroleum system, understanding and de-risking of the project. An outcrop source rock field (sampling) program was conducted in July 2019. An Environmental Impact Assessment (EIA) was initiated after reprocessing the gravity and magnetic dataset covering Zimbabwe, transcribing field tapes and reprocessing seismic data in the basin.

Besides signing an MoU with Sable Chemical Industries (Sable), IVZ opened up its county office in Harare.

Moving to FY20, the Company received positive results of new geochemical analysis of source rocks, confirming the presence of at least two source rock facies in the Basin, in the Mkanga Formation and the Angwa Alternations Member, which also consists of good quality gas and liquid.

The Company signed its second MoU after Sable with Tatanga Energy for 500MW. It also completed the Independent EIA Survey, along with a placement raising $1.5 million.

During the December quarter, IVZ commenced Production Sharing Agreement negotiations with Republic of Zimbabwe, and is currently continuing its farm out process of the Project, with numerous companies evaluating the project in physical and virtual datarooms. The process has been successful in grabbing the attention of E&P and Private Equity companies alike.

Recently, the Project was also identified as a priority development project by the Office of the President and Cabinet of Zimbabwe, to be implemented under the Zimbabwe Government’s 5th 100 Day Cycle Priority Projects. 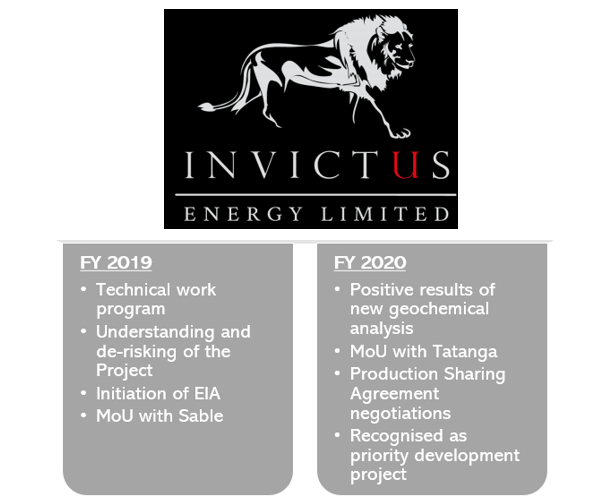 In the future, IVZ plans to complete the farm out on good terms to maximise shareholder value and secure additional markets and monetisation options. Besides this, the Company will focus on drilling basin opening exploration well that has the potential to provide multiple ROI.

Backed by the support of Government of Zimbabwe, with lucrative MoU and a farm-out in progress, a strengthened Board and the expertise of Non-executive Chairman - Dr Stuart Lake, IVZ’s lucrative Project seems to be on a growth trajectory.