Independent oil & gas exploration company, Invictus Energy Ltd (ASX:IVZ) is the first mover in the Cabora Bassa Basin in Zimbabwe, one of the largest under-explored interior rift basins in Africa. The Company has been successful in tapping the early entry advantage by securing the best acreage, best terms and most lucrative markets.

The Company is progressing the Cabora Bassa Project and recently provided an update on its activities for the quarter ended 31 December 2019.

In the December quarter, IVZ’s focus was on making substantial progress in its 80% owned and operated Special Grant 4571 licence of the Project and successfully advancing the Project’s status. 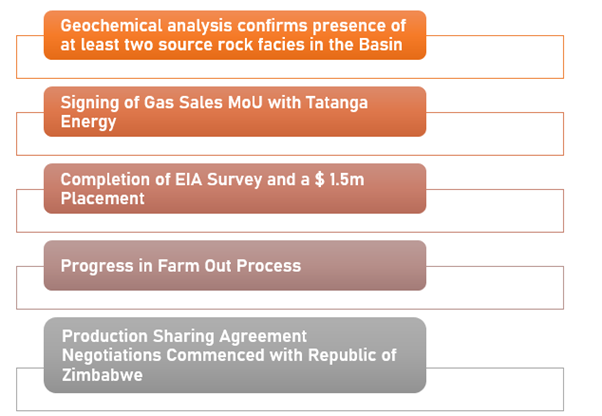 Source rocks from surface outcrop to the west of the SG 4571 licence area were collected in July 2019 for analysis. In the December quarter, IVZ announced the results of new geochemical analysis of these source rocks and affirmed the presence of at least two source rock facies in the Basin. The source rock facies are present in the Mkanga Formation and Angwa Alternations Member.

Moreover, the source rock analysis correlates with data from other African and West Australian Basins and suggests affinity with oil and gas prone source rocks discovered elsewhere in the world. The Company also affirmed the potential of the source rock to generate significant quantities of hydrocarbons.

To know more about the geochemical analysis, PLEASE READ- Invictus Energy Advancing Well At the Cabora Bassa Basin in Zimbabwe

Marking the second MoU pertaining to the project, IVZ signed a non-binding MoU with Tatanga Energy (Private) Limited to progress gas supply for a ±500 megawatt Gas to Power plant. It has already signed a gas sale MoU with its industry partner and sole manufacturer of agriculture grade ammonium nitrate fertiliser in Zimbabwe, Sable Chemical Industries Ltd.

Under the second and recent MoU with Tatanga, both companies would collaborate and cooperate to investigate the economic and commercial viability of supplying natural gas from the Project to the proposed Gas to Power Plant, due to be sold to the national grid and/or captive clients in Zambia, Zimbabwe and Mozambique.

In the December quarter, IVZ completed the Environmental Impact Assessment (EIA) study. The draft was prepared in December after the Scientific and Industrial Research and Development Centre completed its fieldwork and comprehensive study.

In January, final submissions from national museums, parks and monuments along with the Zimbabwe National Water Authority were received. In the coming days, the full EIA report will be submitted to the EMA for approval.

IVZ successfully completed a well-supported placement of $1.5 million via the issuance of 57,692,310 shares. The funds raised will be used to advance the Cabora Bassa Project and also support the EIA study, consultations and report. Moreover, proceeds will be directed towards the EMP fee and licence ground rental fees and commencement of preparatory works for the on-ground exploration phase.

At the end of the quarter, IVZ had cash and cash equivalents worth $2,057k.

Farm Out Process in Progress

IVZ, which aims to select a partner to participate in the high impact basin opening well, progressed the farm out process in this regard. It is evaluating the project in physical and virtual datarooms with several companies, mostly E&P ones and private equity players, focused on upstream investments.

Another highlight of the quarter for IVZ was the beginning of negotiations to implement a new petroleum regulatory framework in the form of a Production Sharing Agreement (PSA) with the Republic of Zimbabwe. PSA is a more progressive agreement and provides a formulation to share the product/profit. It will ensure a predictable, stable and transparent legal and fiscal regime in place.