An independent oil and gas explorer aiming at high impact energy resources in the sub-Saharan Africa, Invictus Energy Limited (ASX: IVZ) has an impressive asset portfolio which consists of a highly prospective portion (250,000 acres) of the Cabora Bassa Basin in Zimbabwe, an under-explored and one of the largest interior rift basins in Africa.

Invictus is 80% owner and operator of SG 4571, that was granted in August 2017 for an initial 3-year period (renewable) in Cabora Bassa.

Interestingly, the new Zimbabwe government is pro-business, promoting foreign investment and has implemented investor-friendly reforms, including amendment of Indigenization and Empowerment Act and enactment of Special Economic Zones legislation. 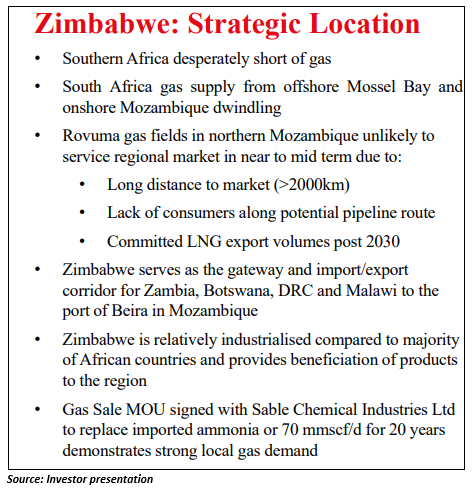 The Cabora Bassa Project comprises of the Mzarabani Prospect, a multi-TCF conventional gas-condensate prospect, believed to be potentially the largest undrilled seismically defined structure onshore Africa. The prospect is defined by a robust dataset acquired by Mobil in the early 1990s that includes gravity, aeromagnetic, seismic, and geochemical data

In FY19, IVZ focussed on the technical work program that was designed to mature the Company’s understanding of the Cabora Bassa Basin petroleum system and de-risk the project (exploration and appraisal of the Project).

This work program has resulted in the identification of the largest undrilled prospect onshore Africa and independently assessed as one of the largest conventional exploration targets globally.

The Project was acquired in June 2018, and since then, several technical, commercial and strategic objectives have been achieved, including:

Invictus Inches One Step Ahead During September Quarter

During the September quarter, the Company made significant progress in the Cabora Bassa Project, including:

In November 2019, IVZ received the geochemical analysis results (conducted by GeoMark Research in the USA) from the recent outcrop source rock field sampling program in the Basin (to the west of SG 4571 permit), that was carried out in July 2019.

The analysis confirms that-

With the cash reserves of $1.45 million (as on 30 Sept 2019) and recently secured placement of $1.5 million, Invictus is seeking a farmout partner ahead of planned high impact basin opening exploration well. FY20 will be incredibly important for Invictus and its shareholders as the Company progresses the Cabora Bassa Project. The potential of its acreage is truly staggering for a company this size as it thrives to grow exponentially.