Zimbabwe and Southern Africa are in the midst of an energy crisis with acute power shortages impeding industry and overall economic growth. The region seeks gas as the energy transition stalls while the aging coal fired power plants are being retired. In milieu of this, a shift from heavily polluting coal to a cleaner set-up (renewable energy supported by gas) is the need of the hour.

To address the increasing energy crisis, the Southern African Power Pool (SAPP) was established in 1993 to facilitate cross-border electricity trading between state and provide a virtual pipeline route to monetise gas within and across borders through Gas to Power projects. The spine of the SAPP transmission network runs through Zimbabwe giving it the greatest access to other member states. Moreover, the new government is pro-business, advocating foreign investment and investor friendly reforms.

In this backdrop, we introduce to you the first mover in the highly prospective portion of the Cabora Bassa Basin in Zimbabwe - Invictus Energy (ASX: IVZ) operating in one of the largest interior rift basins (under-explored) in Africa.

Invictus owns the Cabora Bassa Project (80%) along with One-Gas Resources (Pvt) Limited (20%). IVZ is the operator of this lucrative project and is seeking to develop potential regional markets in addition to significant local natural gas demand in Zimbabwe.

The Company was granted SG 4571 in August 2017 for initial 3-year period (renewable) where an experienced Zimbabwean management team with substantial operating experience is on track to deliver promising results.

The Project’s Mzarabani Prospect has a vast stacked potential and is amongst the biggest conventional exploration targets on a global level. With a single well in a huge stacked prospect to test gross 8.2 Tcf + 250 mmbbls, the additional mapped potential provides running room on success with an estimated well cost of US$10 million (dry hole cost).

Invictus, with a strengthened team, has been on track to progress the Cabora Bassa Basin ever since it secured the first mover advantage in high potential acreage at minimal cost and unlocked the $30 million dataset via modern technology. The technical de-risking and addition of significant value and prospectivity with subsurface work program has added to the result delivery along with commercial de-risking through strong demand from domestic and regional markets.

To progress Project delivery, IVZ signed a Gas Sale MoU with Sable Chemical Industries for up to 70 mmscf/d for 20 years (26 billion cubic feet per annum) in the June Quarter and recently with Tatanga Energy to develop 500MW Gas to Power Project in Zimbabwe.

The Environmental Impact Assessment prospectus was approved in September 2019 to carry out full assessment.

Let us browse through the recent substantial discoveries at the Basin: 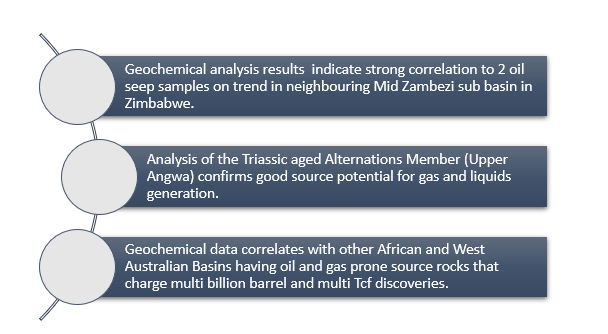 The Company seeks to complete the on-going farm out on good terms to maximise shareholder value and secure additional markets and monetisation options. It also aims to drill basin opening exploration well that has the potential to provide multiple ROI.

After signing the MoU with Tatanga Energy, Managing Director Mr Scott Macmillan stated that the Company looks forward to work closely with them and One-Gas Resources to progress the project and eventually deliver affordable and reliable baseload power to Zimbabwe.

With the continued support from stakeholders, in-country partners and contractors, the strengthened Board, and a motivated team, IVZ aims to supports Zimbabwe’s Vision 2030 twin goals of boosting economic growth and driving investment in private and public projects via the Cabora Bassa Basin project.

Cannabis companies that sell both medicinal weed and recreational pot. Marijuana stocks to look at. Marijuana mergers and acquisitions. Dispensary data analytics. Upcoming marijuana IPO’s Those phrases have become increasingly common as marijuana legalization spreads. Global spending on legal cannabis is expected to grow 230% to $32 billion in 2020 as compared to $9.5 in 2017, according to Arcview Market Research and BDS Analytics. As of June 29, 2018 the United States Marijuana Index, despite a lot of uncertainty around regulations, has over the past 1 year gained 71.49%, as compared to about 12% gain seen by the S&P 500."