Corazon shares closed at $0.004 on 16 January 2020 with the day’s high of $0.005. The stock closed at a market capitalisation of $8.35 million with 2.088 Billion issued shares. A total of ~122 million shares changed hands on ASX as against annual daily average volumes of ~13.5 million shares. The positive outcomes from the remaining drilling samples will further provide clarity on the mineralisation and its intensity, which would help Corazon fast track the project towards production.

The recent exploration program targeted on identifying additional areas of mineralisation to increase the property’s mineral resources potential. The drilling targets have been targeted as per the following criteria- 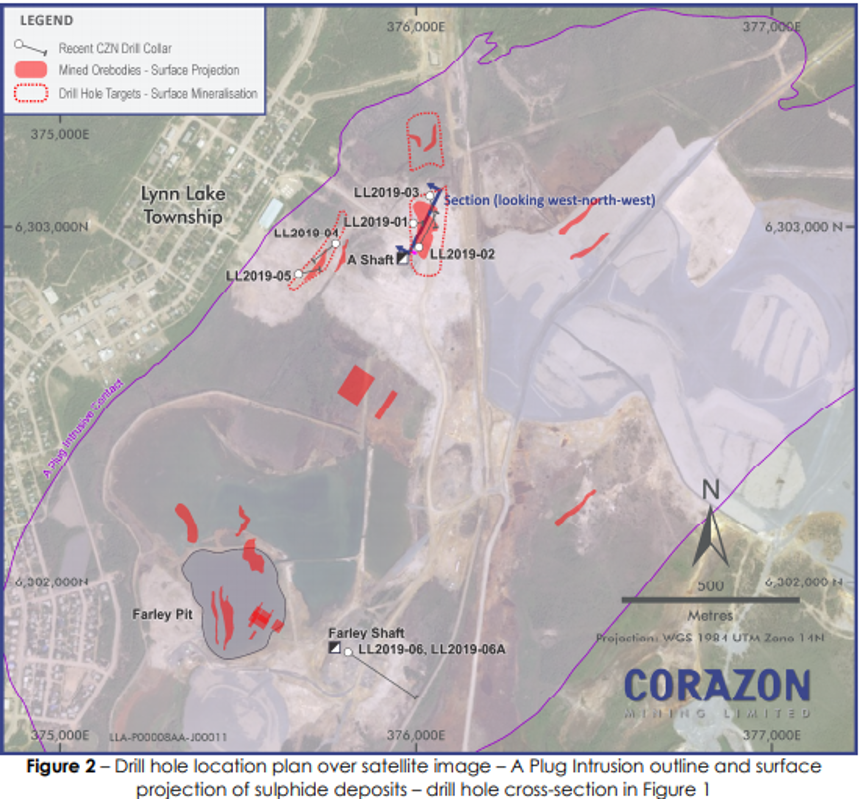 The past mining studies at Lynn Lake focussed on the deeper nickel assets at depth more than 400 meters below the surface. The studies indicated the possibility of the presence of mineralisation with additional resources at shallow depths in the historically mined areas. The Lynn Lake operations operated for 24 years before closing operations in 1976, producing almost over 206 kilotonnes of Nickel and 107 kilotonnes of Copper at an average ore grade of 1.02% nickel and 0.54% copper.

For Preliminary Drilling Results: Must Read

The latest exploration program involved diamond drilling on targets closer to the surface. During the recently completed 1,122 meters drilling program, a total of seven holes were drilled, and the diamond drilling coring samples were sent to the Perth based lab for assaying. The drilling program was not exhaustive, and still, few other shallow targets can be considered for drilling in future.

A total of 34.1 meters of drilling was carried out in the hole. The drilling was halted on the intersection of the drill bit with the backfilled crown pillar stope from the historic mining operations. As per the visual estimates, the drilling experienced 6.3 meters (15.3 to 21.6 meters) zone of heavy disseminated, blebby and matrix/interstitial style sulphide mineralisation. The assay results reported a 7 meters zone of mineralisation with moderate grades of 0.62%Ni, 0.37%Cu, 0.02%Co, west of the LL201902 hole.

The assay results for both the targets fall in line with the previously reported preliminary drilling results. The drilling samples from the LL2019-01 and LL2019-02 focussed on the historically mined regions around the Orebody A. The area of interest with respect to drilling is approximately 80 metres by 220 metres, around the previously mined high-grade massive sulphides.

The assay results for other coring samples with visible sulphides is expected to be released by the end of January,2020.