Corazon Mining Limited (ASX:CZN), a Perth based minerals exploration and development company recently released an update on its drilling program at the Lynn Lake property.

The update stated the completion of the first three holes in the 1200 meters drilling program, confirming the intersection of sulphide mineralisation in all three holes. The visual analysis of the coring samples from the diamond drilling program affirmed the sulphide intersections, but a better understanding of the mineralisation could only be developed once the assessment of the samples gets completed in the new year.

At present, limited understanding of sulphide minerals exists based on the visual estimates and are expected to consist of mostly pyrrhotite, pentlandite and chalcopyrite minerals.

The drilling holes (namely, 5,6 & 7) are located around the orebody A, which was historically mined. The Lynn lake operations commenced in 1953, ran for 24 years to produce over 206 kilotonnes of Nickel and 107 kilotonnes of Copper before its closure in 1976.

In addition to the historically mined areas, several other prospective regions have been identified with priority areas to orebodies A, E and C. 1200 meters of diamond core drilling is planned to be completed this month, before the beginning of holiday season.

The following preliminary drill results and estimates have been compiled by Mr Brett Smith, B.Sc Hons (Geol), a member of AUSIMM & AIG. Mr Smith has extensive experience related to the deposit type and style of mineralisation. He is employed by Corazon and qualifies as a competent person for the undertaken activity as per the 2012 JORC code.

Hole# 5- A total of 34.1 meters of drilling was conducted. The drilling was suspended after the intersection with what is currently being perceived to be the backfilled crown pillar stope from the historic mining operations. Still, the drilling experienced 6.3 meters (15.3 to 21.6 meters) of heavy disseminated, blebby and matrix/interstitial style sulphide mineralisation.

Sulphide percentage in the section varies from 3% disseminated to 60% semi-massive as per the visual estimates of the expert. The drilling from sections of other depth has only fine disseminations with irregular sulphide blebs as per the current understanding.

Hole# 6-- A total of 155 meters of drilling was conducted. The drilling intersected through multiple narrow mineralisation zones (21.95-22.80 & 71.30-72.40 meters) and may be explained as strong sulphide mineralisation (high sulphide percentage range), including heavy disseminations with narrow semi-massive zones. The presence of siliceous ore indicates the (1%+) high Nickel grade in the mineralisation. Further detailed logging is yet to be completed for the deeper sections, especially for the section between 72.4 and 155 meters.

Hole# 7- A total of 167 meters of drilling was conducted, with strong sulphide mineralisation including heavy disseminations and interstitial sulphide with narrow bands (<10 centimetres) of semi-massive sulphide, stretching from 6.5 to 46 meters.

Sulphide percentage in the section varies from 3% disseminated to 60% semi-massive as per the visual estimates of the expert. The mineralisation below 46 meters, consists of gabbro lithology with irregular sulphide and siliceous mineralisation with varying sulphide percentages as per the current understanding. Further detailed logging is required for the deeper sections. 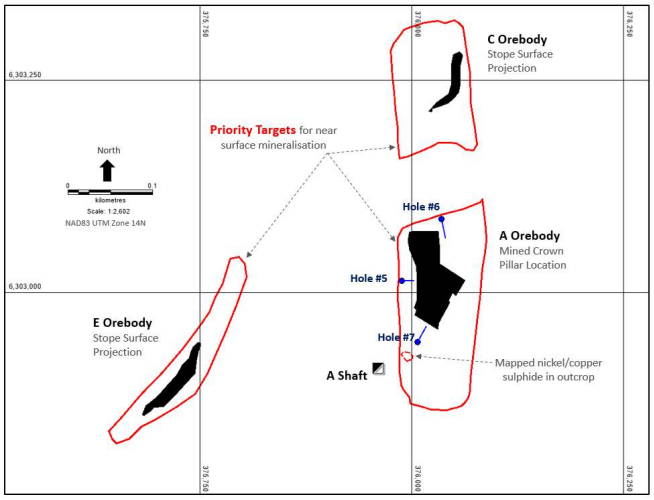 Corazon currently, holds two critical projects in promising geographies of Canada and Australia trying to tap the opportunities for Nickel and Cobalt among other metals. Most of the investment by the company, have been targeted in the developed economies and primarily to focus on increasing demand for commodities such as Nickel, Cobalt and Copper, which are required for the booming rechargeable batteries. The company believes that the demand will further increase in future with the increase in acceptance of electric vehicles by the developing and developed economies.

Corazon was listed on ASX in 2005, acquired its flagship project of Ni-Co-Cu Lynn lake mining property through the acquisition of Manitoba Nickel Pty Ltd. The mining property located in the state of Manitoba has not been under the control of a single owner since the closure of the operations in 1976. The exploration and development of Lynn Lake is the primary target for the company.

Corazon shares closed at $0.003 a share on 20 December 2019, with a market capitalisation of $6.2 million. The company also has a cash reserve of $1.2 million as of September this year which it can use for its future endeavours. 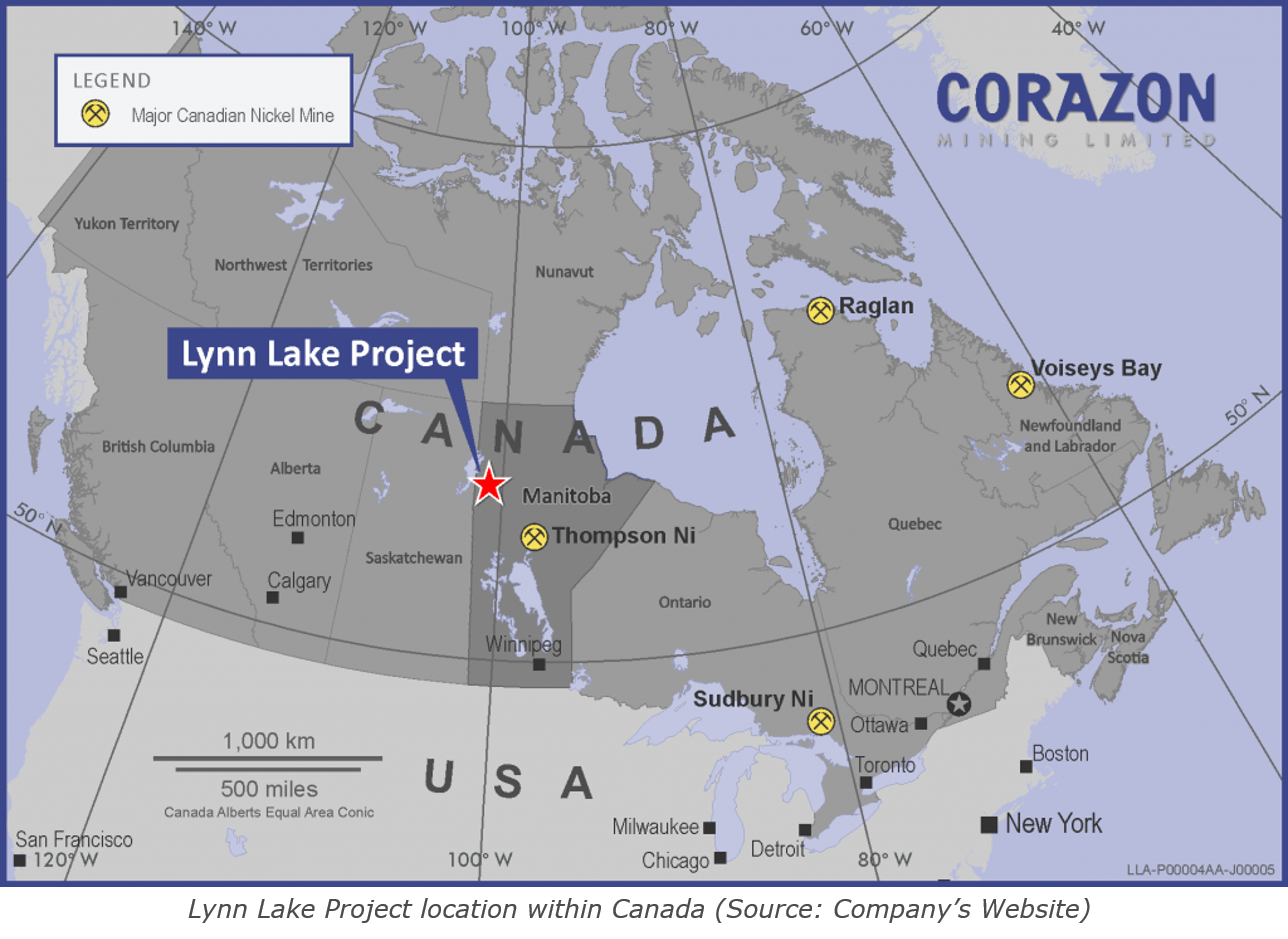 Lithium prices fuel the company to fast track the exploration and development of the Lynn Lake brownfield project. The current market scenario indicates the requirement of supply from projects to feed the increasing demand.

The mining property operated for 24 years and was later closed in 1976. Areas with sizeable resources are being explored and will further expand the resources. The future drilling program has already been planned.

The historical mining operations used technologies which were ineffective and produced low grade concentrates with Nickel grade varying between 8 and 15% and Copper concentrate grades around 22%. Corazon believes in the utilisation of modern processing technologies and chemical reagents to produce high-quality high-value products with higher metallurgical recovery at optimum operating expenses.

The metallurgical study is further being worked on to optimise the products further. The production of separate Nickel and Copper products would help extensively to save on the secondary processing costs to separate Copper and Nickel from the mixed concentrates. Separate Nickel and Copper concentrates also would ease the usage of the Nickel products for further refinement. The company has involved METS Engineering to work on the metallurgical study.

Extensive drilling programs and application of cutting-edge exploration techniques have resulted in a significant increase in the mineral resources for the project. Corazon had published the updated resources for the Lynn lake property in November and expected minimal verification drilling and sampling to upgrade its current mineral resources. The recent studies have been more inclined on Nickel mineralisation at a depth more than 400 meters below the surface.

Additional areas for further exploration have been identified and have prioritised the drilling program based on the proximity of the mineralisation to the surface and areas within the historical mining zone or near to the existing resources.

The newly published resource estimates include the minerals from EL, N, O, P, Golf and Disco deposits with indicated and inferred resources of-battery

Lynn lake is perfectly positioned among the potential Nickel projects. The location of the project has excellent accessibility and infrastructure. The resources provide an excellent insight into the project’s future potential as a large tonnage mining operation with a long mine life. The results so far have been consistent with the historical understanding of the deposit.

The study for the project is focussed towards achieving three main objectives of minimising expenses, production of high-value products with recovery and extensive exploration programs to ensure long mine life. The project would position Corazon as a low cost, stable producer of high-value Nickel and Cobalt products and would enjoy the upcoming rechargeable battery boom which is expected to be fuelled by electric vehicles.