In this article, we would be discussing CMW, a REIT, and GMA, a lenders mortgage insurance provider. In the time span of one month, three months and six months, both the stocks - CMW and GMA – have provided positive returns. Let’s have a broader look at these stocks covering their recent updates.

Cromwell Property Group (ASX: CMW) is an Australia registered company, which operates as an internally managed Australian REIT and a property fund manager. The company was officially listed on ASX in 1973. On 2nd August 2019, the company declared a dividend of $ 0.181, to be paid on 23rd August 2019.

On 31st July 2019, the company updated the market regarding the completion of its security purchase plan on 24th July 2019. It was also mentioned in the release that the share purchase plan was oversubscribed, owing to strong support from the eligible shareholders, by around $ 2.5 million. The company received applications for the plan amounting to around $ 32.5 million. Moreover, CMW has decided to accept the oversubscription in full.

CMW would use the proceeds from the security purchase plan, in addition to funds raised with the completion of the institutional placement on 27 June 2019 amounting to around $ 375 million, to finance numerous strategic growth opportunities as part of its “Invest to Manage” strategy. Additionally, the strategy includes more than $ 1.0 billion of acquisition opportunities in Europe and Australia. The company would also direct the proceeds, coupled with recycled capital from sale of assets, towards accretive value-add development opportunities worth more than $ 1.0 billion throughout its current core and active real estate portfolio in Australia. Owing to the increased offer size, the company would be issuing 28,294,234 securities.

In another update on 1st July 2019, the company announced a deal with Hong Kong-based Early Light International. Under the deal, Cromwell Property sold its 50% interest in Northpoint Tower for a consideration of $ 300 million. The sale of interest is subject to approval from the Foreign Investment Review Board (Or FIRB) and is anticipated to complete in the mid of September 2019.

Sale of the stake, in addition to the recent successful transaction amounting to $ 375 million from the institutional placement and new 3-year syndicated facility amounting to € 225 million, would give a certainty of funding for more than $ 1.0 billion of acquisition opportunities and more than $1.0 billion of value-add development opportunities. These acquisition opportunities are in either exclusive due diligence or advanced negotiations.

As per the company’s equity raising presentation released on 26 June 2019, CMW continued to decrease its gearing over the last 18 months. Moreover, the company would aim a gearing in the ambit of 30 – 40%. It added that comprising the effect of the placement, and prior to reinvestment of proceeds in identified opportunities, the pro forma gearing declined to 23.9% and pro forma look-through gearing decreased to 31.3%. 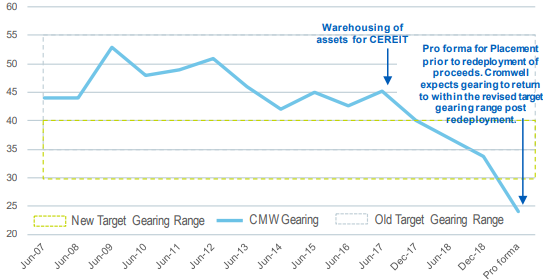 The company reported gross margin and EBITDA margin of 85.0% and 51.0% in 1H FY19 against the industry median of 74.1% and 62.2%, respectively. It posted net margin of 69.1% with YoY growth of 17.7%. This reflects that CMW is improving its capability to convert its top line into the bottom line. The current ratio of the company stood at 2.09x in 1H FY19 as compared to the industry median of 0.49x, which represents that the company is well positioned to meet its short-term obligations in comparison to the broader industry.

An Australia registered company, Genworth Mortgage Insurance Australia Limited (ASX: GMA) provides lenders mortgage insurance to its clients in Australia. The company was officially listed on ASX in 2014. On 31st July 2019, the company, via a release, unveiled final share buyback, where in the company bought back 24,950,648 shares on market at a consideration of $ 63,903,389.20.

A Look at First Half Result

The company published its first half results presentation on 31 July 2019, communicating about its operational and financial performance for the period. It stated that the results for 1H 2019 were in accordance with its guidance. The company reported new insurance written amounting to $ 12.5 billion, reflecting a rise of 20.7% from 1H 2018. It witnessed a decline of 31.0% in GWP in 1H 2019. However, in 1H 2018, the gross written premium of the company was comprised of a bespoke transaction written via GMA’s Bermudian insurance entity. Ex-the above stated transaction, the company witnessed a rise of 6.4% in GWP in 1H 2019. The company reported a rise of 3.0% in net earned premium (or NEP), inclusive of the release of unearned premium amounting to $ 4.5 million in Q1 2019, which formed a part of GMA’s lapsed policy initiative. Adding to that, the company reported a rise of 5.9% in NEP, excluding the lapsed policy initiative in 1H 2018 as well as 1H 2019. 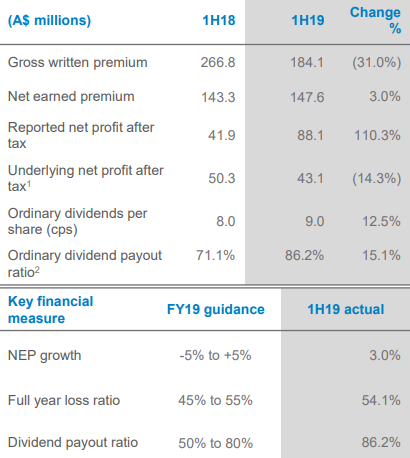 The company registered reported net profit after tax of $ 88.1 million for the first half of 2019, which includes after tax unrealised gain on investment portfolio amounting to $ 45.4 million, while underlying net profit after tax (or NPAT) stood at $ 43.1 million, including after tax realised gain of $ 5.8 million. In 1H 2019, Genworth Mortgage Insurance Australia Limited reported loss ratio of 54.1% against 53.3% in 1H 2018, which is in accordance with its guidance for fiscal year 2019. This represents the uptick in delinquencies historically, which was experienced in 1H 2019. The company further unveiled $ 79.8 million in net claims incurred in the first half of 2019, reflecting a rise of 4.5% from 1H 2018, which is attributable to rising reserves.

The company reported total assets of $ 3,648.2 million as at 30th June 2019 with a rise of 1.6% from total assets at 31 December 2018. The total assets of the company included a decline in cash amounting to $ 83.6 million mainly due to funding the share buy-back program and payment of the final dividend for fiscal year 2018. It also included an increase of $ 114.3 million in investments, primarily due to unrealised gains from the investment portfolio.

A Look at Dividend

GMA is continuing to actively manage its capital position and is constantly evaluating its excess capital and potential uses. The company is expecting net earned premium in the range of -5% to +5%, full year loss ratio to be in the ambit of 45% to 55% and ordinary dividend payout ratio in the vicinity of 50% to 80% for FY19. The company further added that the guidance for FY19 is subject to market conditions and unforeseen circumstances or economic events.

The stock of Genworth Mortgage Insurance Australia Limited last traded at a price of $ 3.350 per share on 2 August 2019, up 1.515% from its previous closing price. It has a market capitalisation of $ 1.36 billion and approximately 412.51 million outstanding shares. The stock generated returns of 17.02%, 33.60% and 49.32% for the one month, three months and six months period, respectively.