The life insurance market is going through a period of consolidation and has seen a number of mergers such as AIA with Sovereign, Cigna with One Path and so on and so forth. Let’s take a quick look at 4 insurance stocks trading on ASX.

Insurance Australia Group Limited (ASX: IAG) is an Australia registered company, providing general insurance services, including a full range of personal and commercial insurance products. Recently, the company via a release dated 26th June 2019 commented on the speculation, which has appeared in the Indian Economic Times regarding the 26% interest of the company in SBI General Insurance Company. Additionally, as per the group’s 1H FY19 results announcement release, the company continues to assess options for its joint venture interests in Asia, including its interest in SBIG. Moreover, the company is currently in discussions with the external parties related to the sale of all or part of the company’s 26% interest in SBI General Insurance Company. In addition, the company is not certain about the occurrence of the transaction.

The company in another announcement reported that the $450 million issue will pay investors a quarterly interest at a floating rate equal to the three-month market rate plus a margin of 2.35% p.a. IAG posted $5,881 million of gross written premium in H1 FY19, up 4.1% on pcp. The cash return on equity for the period stood at 9.8%, with diluted cash earnings per share of 13.40 cents in 1H FY19. The company expects a gross written premium to be in the range of 2% to 4% and reported insurance margin in the ambit of 16% to 18% in FY19. 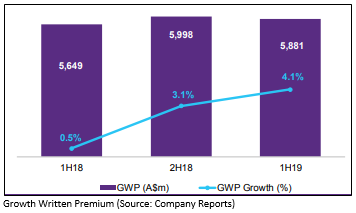 Suncorp Group Limited (ASX: SUN) is an Australia registered company involved in the provisioning of insurance, wealth, banking and other financial solutions to the retail, corporate and commercial sector. Recently, the company, via a release, updated the market that it has received representative proceeding filed in the New South Wales Supreme Court against Suncorp Portfolio Services Limited, a wholly-owned subsidiary of the company and further stated that the matter will be defended.

As per the release dated 23rd May 2019, the company updated that the Australian Prudential Regulation Authority recently released institution-level financial statistics for the general insurance industry, which are based on regulatory filings for the March 2019 quarter. The release by APRA includes statistics for its wholly-owned subsidiary company, AAI Limited. Further, these statistics haven’t had any effect on the profit and loss statement.

The company lately released Macquarie Conference Presentation, highlighting the general insurance market. SUN pointed out that the insurance industry generates NZ$6.5 billion in premium each year as according to the stats of Insurance Council of New Zealand. In addition, the last two years have proven to be the most expensive years for severe weather events since 1969. The system growth for FY19 stood at 9.5% and the gross written premium of Suncorp New Zealand’s general insurance stood at NZ$1.54 billion for FY18, representing 24% market share of the company and made SUN the second leading general insurer in New Zealand after IAG. The company’s NZ$1.54 billion of the gross written premium is diversified throughout the motor, commercial and home markets. 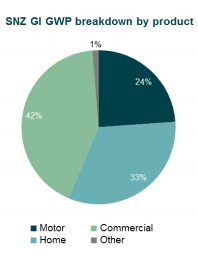 In terms of the life insurance market in New Zealand, the total industry in-force premium stood at NZ$2.5 billion as at December 2018, according to the Financial Services Council. The claims paid out for the period were around NZ$1.4 billion, with a total market new business of NZ$225 million. Furthermore, the life insurance market is going through a time of consolidation.

Moving to the financial performance of the company for the 1H FY19. The company reported New Zealand profit after tax of NZ$120 million, reflecting a rise of 79.1% on the prior comparable period. The general insurance business of the company posted profit after tax of $103 million, an increase of 106% on the prior comparable period. SUN’s loss ratio of 49.1% was down from 56.5% on the back of favorable natural hazard, premium growth and working claims experience.

An Australia registered company, AMP Limited (ASX: AMP) is a provider of life insurance, pensions, superannuation services, etc. As per the release dated 2nd July 2019, AMP Limited has become a substantial holder of Otto Energy Ltd with a voting power of 5.01% on 28th June 2019.

The company recently reported results of Annual General Meeting conducted on 2nd May 2019, wherein the following resolutions were passed:

The company reported a segment-wise cash flow position and assets under management in Q1 FY19. With regards to the AMP Bank, the total loan book increased by $127.1 million and reached to $20.1 billion in the first quarter of FY19, driven by the growth in the mortgage book channel. AMP’s deposit book also rose by $218 million to $13.5 billion during the quarter and on the other hand, AMP Capital posted net external cash outflow of $20 million.

Turning to New Zealand Wealth Management, it has witnessed a rise of 7% to $11.9 billion in assets under management for the Q1 FY19, which was mainly on the back of positive market performance. It further reported net cash inflows of $37 million into KiwiSaver.

Steadfast Group Limited (ASX: SDF) is engaged in the insurance broking and underwriting services. Recently, the company via a release dated 26th June 2019 announced that it had entered into an agreement with Insurance Brokers Network Australia Limited (IBNA) in relation to Insurance Brokers Network Australia Limited supporting IBNA members joining SDF’s network and renouncing rights to rebates from professional services fees to Steadfast as a result of business placed by those members with strategic partners.

In terms of Steadfast Client Trading Platform, it has been used by more than 300 brokerages and over 5,000 individuals and witnessed an average quote to bind rate of around 32% throughout all classes, with an insurance retention rate of approximately 87%.

Looking at the group’s investment activities in FY19, the company invested in new equity holdings and greenfield startups. The equity investment of the company mainly includes CBN, which is an authorised representative network and HMIA, which is a heavy vehicle underwriting agency and the company has unutilised debt facility of $85 million.

Importantly, the company expects a gross written premium of around $500 million to be transacted through the Steadfast Client Trading Platform in FY19. The company has provided underlying EBITDA guidance in the range of $190 million to $200 million and underlying net profit after tax in the region of $85 million to $90 million for FY19. 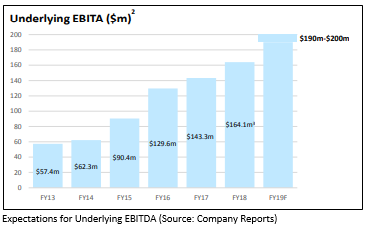