A mortgage company is a provider of loans, which utilises the funds from the borrowers to source finances from large banks at cheaper interest rates for the purpose of lending money.

Mortgage firms are basically categorised into three distinct categories, namely mortgage bankers, mortgage broker companies and direct lenders. Mortgage bankers receive the application for a loan, they seek for a suitable lender and hand over the money to the borrowers themselves. Mortgage brokers are different from mortgage lenders in the fact that they simply act as a mediator between the borrower and the lender. On loan request, they connect the borrower to the lender, who receives the monthly payments. Mortgage brokers earn money in the form of commissions. A direct lender has its own money and guidelines for the loans provided. They extend loans to the consumers through a broker or a banker.

Now let us have a close look at few examples of mortgage stocks listed on ASX.

Australian Finance Group Ltd (ASX: AFG) is engaged in the mortgage origination and management of the home and commercial loans. The company recently released its Mortgage Index for the fourth quarter of the financial year 2019. In the three months to June 30th, the AFG Index recorded more than $13 billion in lodgements, up 12% on the prior quarter.

In another recent announcement, the company came up with a change in its executive team, wherein Mark Hewitt took up the new role as the General Manager Industry and Partnership Development. Chris Slater took over the responsibility of Sales and Distribution across the AFG Home Loans and residential broking businesses. The company is also planning to appoint a GM for the AFGS (AFG Securities) business.

Revenues for the period witnessed a rise of 3.2% on pcp, with revenue from AFG Home Loans up 21% on the prior period. Total revenue from AFG Wholesale Mortgage Broking segment amounted to $281,703. The company responded to the Final Report of Royal Commission released in February, recommending abortion of trail commissions to mortgage brokers by lenders.

Financial Highlights: During the half year ended 31st December 2018, the company reported NPAT on a cash basis amounting to $7.1 million, in line with the guidance provided. At the end of the period, the company had a loan book of $54.5 billion, up 1% on the prior corresponding period value of $54 billion. Financial planning funds under advice stood at $816.9 million, up 28.8% on the prior corresponding period. Financial planning insurance premiums in force amounted to $28.9 million, up 8.5% on pcp. EBITDA (cash basis) during the period was reported at $11.02 million as compared to $18.46 million in the prior corresponding period. During the period, the company reported cash earnings per share of 5.7 cents. In addition, the Board declared a fully franked interim dividend of 3 cents per share.

The adoption of a new franchisee remuneration model structure to increase the payment to franchisees and reduction of volatility in earnings worked as key drivers of performance during the six month period. Due to the change in the remuneration model, the company witnessed a decline in the gross profit for the core broking business. Settlement volumes during the period were impacted by the slowing property and home loan markets.

Net insurance written during the quarter totalled $5,393.5 million, up 24% when compared to $4,349.2 million in the prior corresponding quarter. Growth in net insurance written was attributable to the bulk portfolio business and sustainable growth in LMI flow. Gross written premium during the quarter stood at $86.3 million, down 50.4% on the prior corresponding period premium of $174.1 million. Net earned premium for the quarter amounted to $72.9 million, up 8.2% on pcp value of $67.4 million. As at 31st March 2019, the company has $1.2 million in unearned premium reserve.

The management stated that the companyâs performance in the first quarter was in line with the guidance provided for the full year with ongoing progress in enhancing the core business model.

Operating expense ratio for the period stood at 42.5%, down 40 bps compared to the prior corresponding half. During the period, the company incurred an impairment expense amounting to $13.3 million, up $2.9 million or 27.6% on the prior corresponding period. An increase to the extent of $2.2 million was a result of the new IFRS9 methodology. Despite the increase in the expense, the underlying receivables performance remained stable. Non-performing loans ratio for the period also improved to 1.70%. 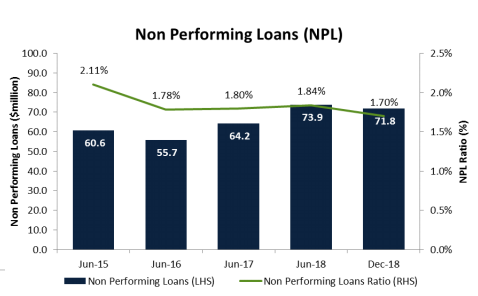 FY19 Guidance: The company issued an updated earnings guidance in the range of $73 million to $75 million, a mid-point of which will lead to NPAT growth of approximately 10% on the previous year.

Bank of Queensland Limited (ASX: BOQ) is engaged in the provision of financial services and products. The company recently notified that Matt Baxby resigned from the position of CFO but will remain with the group till the release of full year results in October 2019. In another announcement, the company updated investors on the appointment of George Frazis as the Managing Director & CEO from 5th September 2019.