Australia is said to have one of the best healthcare systems in the world, with respect to cost, quality and access to healthcare services. The sector, however, faces challenges arising from rising chronic diseases, ageing population, increasing demand for new treatments and requirement for more hospital beds. The above challenges can impact the ability to deliver the level of service that the population aspires.

Director’s Interest: The company recently updated that Joshua Michael Fegan, one of the directors, has acquired 12,750 ordinary shares for a total consideration of $10,036.27.

Botanix Pharmaceuticals Limited (ASX: BOT) is a clinical stage cannabinoid therapeutics company which is primarily engaged in the development of safe and effective topical treatments for serious skin conditions.

The company recently notified that it presented an update on its antimicrobial platform at the ASM/ESCMID Conference on Drug Development to meet the Challenge of Antimicrobial Resistance in Boston,US. In the presentation, Dr Mark Blaskovich highlighted the unique properties of synthetic cannabidiol. It consists of a Gram-Positive broad-spectrum antibiotic and helps in killing the bacteria very quickly. The product disrupts biofilms that bacteria use to protect themselves and has been shown to be effective in animal wound infection models.

The company has also made an announcement regarding two antimicrobial development products, AB 2367 for Clostridium Difficile gastrointestinal infections and BTX 1801 for skin infections. Furthermore, it is now exploring more opportunities for further development of its antimicrobial platform.

FY19 Performance: During the year ended 30 June 2019, the company made significant progress in key operational areas including intellectual property, product development, board and business development and executive management. In June 2018, the company commenced the fully funded BTX 1503 Phase 2 acne clinical study. The company also received ethics approval for its BTX 1308 Phase 1b psoriasis mechanism of action study in September 2018. With the near-term focus on completing Phase 2 clinical programs and further clinical studies for pipeline projects, the company is well positioned to continue its growth momentum. During the year, the company generated a loss after tax amounting to $17.04 million, as compared to $11.01 million in pcp. 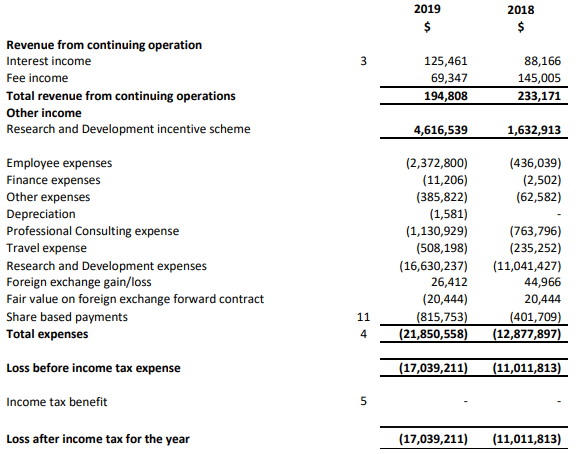 Performance Highlights: During the half year ended 30 June 2019, the company reported positive results for NNZ-2591 in three debilitating childhood neurodevelopmental disorders with no approved drug therapy. The disorders include Pitt Hopkins syndrome, Phelan-McDermid syndrome and Angelman syndrome. The company submitted applications for Orphan Drug designation to the US Food and Drug Administration for each of the syndromes. The designation provides the drug with a special status to treat a rare disease or condition.

In addition, the company is on track to commence US Phase 3 trial for Rett syndrome in Q42019. The Lavender study includes treatment of 180 females with trofinetide or placebo for 12 weeks. This will be followed by LILAC study patients will be eligible to continue treatment with trofinetide for 40 weeks.

Cash reserves as at 30 June 2019 were reported at $17.3 million, as compared to $23.6 million as at 31 December 2018.  The decrease in cash reserves came in from an increase of $4.3 million in research and development costs and expenditure for the advancement of manufacturing scale-up and non-clinical studies for NNZ-2591.

Cynata Therapeutics Limited (ASX: CYP) is engaged in development and commercialisation of a proprietary mesenchymal stem cell technology for potential human therapeutic use, which has been branded as Cymerus™.

The company recently notified that a scientific research paper for demonstrating the efficacy of Cymerus MSCs has been accepted for publication in a leading journal, Stem Cell Research & Therapy. The treatment provided through Cymerus™ MSC demonstrated effects that can help in prevention of organ transplant rejection.

Outlook: The company is well placed to continue its growth and development in FY20, with three new Phase II trials expected to commence. In addition, the company is also undergoing license agreement discussions in further areas.

The company recently updated that it has issued 5,000,000 fully paid ordinary shares upon exercise of unlisted options on 27 August 2019. The options were exercised at a price of $0.08, by Brian Leedman, former director of the company.

Changes in BOD: The company notified that Ray Blight resigned from the position of Chairman and Rebecca Wilson, currently a Non-Executive Director, was appointed as the Chairman as a replacement.

Financial Results: In FY19, unaudited revenue of the company stood at $16.9 million, up 33% on prior corresponding period unaudited pro-forma group revenue. The period was marked by first full year positive operational cash inflow of $2.0 million and an overall net inflow of $282,000. Net loss after tax was reported at $84,000. During the year, major new contracts led to growth in revenue. 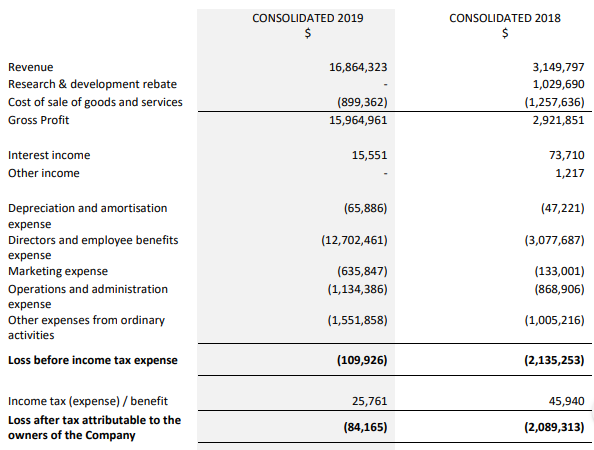