Cannabis which is commonly referred as marijuana, is the commonly used illicit drug. Marijuana has been used for the past thousands of years, largely for two purposes, for medicinal purpose and also for getting high. The people can smoke marijuana, drink it in a tea or eat in the various products such as brownies or chocolate bar.

Few people also use medical cannabis to treat anorexia, chronic pain, nausea, muscle spasticity, and sleep disturbances. Most of the countries have banned the use of marijuana.

Cannabis is legalised only in few countries such as Australia, Canada, Uruguay, Spain, Luxembourg, Peru, New Zealand and District of Columbia in the United States.

While the federal law of the United States still prohibits the sale and use of marijuana, hemp was legalised at the national level in the last year of December 2018.

Cannabis stocks are in great demand right now. Few have projected that the annual Global cannabis market could be worth approximately $150 billion in the next 15 years.

Emerald Clinics, founded by medical innovators, is a healthcare technology and services company. The first patient that the company attended to was in December 2018. Emerald’s team includes experienced physicians and experts in clinical trial to deliver world class patient care. The company plans to expand its existing clinics in Perth, Sydney, Melbourne and regional NSW with further clinics in 2020. 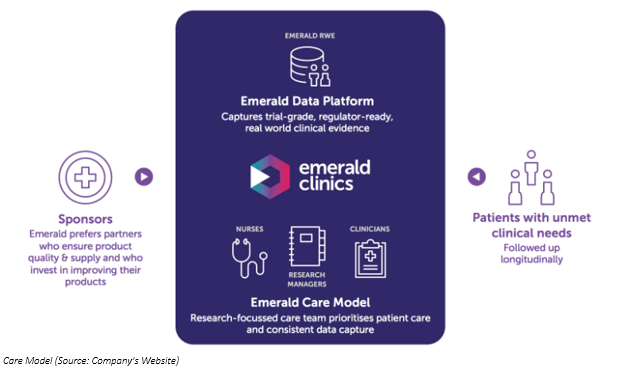 The company has a clinical care team focussed on research. The patients who are referred to the company are followed-up from time to time and are invited to complete their healthcare assessments. The data generated from these assessments helps the company to manage the individual patient optimally.

To capture and aggregate anonymous clinical data from every consenting patient, the company uses different healthcare technologies. The data helps the team to cater to the patient more effectively.

The industry in which the company operates is subject to international and domestic competition. The company has undertaken all the required due diligence in its operations and business decisions but has no influence or control over the activities or actions of its competitors and their actions may impact the financial performance of the company.

The company is highly dependent on the management and its key personnel, including the experienced clinicians. If one or more of these key persons cease to be part of the team, it could have a negative impact on the financial performance of the company. The highly qualified and capable staff members are very important for the success of the company.

On 11 December 2019, the company has launched the prospectus for an IPO with the Australian Securities and Investments Commission (ASIC) to offer approximately 40 million of fully paid ordinary shares at an issue price of $0.20 per share to raise around $8 million.

The Prospectus also includes the offer of up to 20,625,000 shares to be issued on conversion of the Convertible Notes. It is anticipated that the IPO and the convertible note offer will close on 17 January 2020 at 5.00 PM. The company’s directors reserve the right to close the offer at any time and extend the date without any prior notice.

The company’s Board believes that the initial public offer gives an attractive opportunity to investors become the company’s shareholder, a company which possesses data-driven cannabinoid-based medicines and a large number of clinics.

The proceed raised under the public will allow the company to:

Lead Manager for the IPO

PAC Partners has been appointed by the company as a lead manager of the public offer. The company has agreed to pay the PAC Partner, a capital raising and selling fee of 6 per cent of the total amount raised under the offer.

The company also pays the lead manager and its associates: