A significant progress has been seen in Cannabis industry at a global scale, a sector that has witnessed traction and speculation at the same time. Once, a topic of taboo, cannabis is one of the most debated topics worldwide currently.

Canada stood as the first industrialised country and the second one in the world that has legalised cannabis for recreational purpose in October 2018. A year after Canada’s foray of legalising recreational cannabis/marijuana, Cannabis 2.0/Legalisation 2.0 kicked-off, which sanctions selling cannabis infused edibles, beverages, vape pens and extracts.

Canada's legalisation policy has widely been accepted and regarded as a conquest with $8 billion being generated from cannabis-related investment in just the first month post Cannabis2.0 legalisation, thus, providing a blueprint for other countries to follow. In view of this, Australian cannabis legalisation seems to be on the horizon.

Legalisation of Cannabis in Australia

In Australia, Narcotic Drugs Amendment Act provided a green signal to legally grow cannabis for medicinal use within Australia in February 2016, with a total of 69 licences issued for production, cultivation and manufacturing including-

The overseas distribution of cannabis got legalised by the Government in January 2018.

Australian medicinal cannabis market is perhaps the most precipitously blooming sector globally which is presently valued at $17.7 million, and likely to generate $1.2 billion in the next 5 years. In fact, it is possible that it could be worth $3 billion by 2028. Australian Capital Territory (ACT), became the 1st ever Australian region to approve the new cannabis law legalising cannabis for recreational possession and cultivation, after raising a lot of eyebrows. 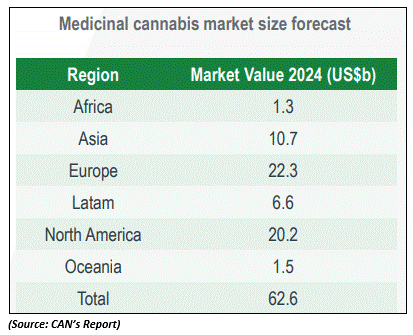 Although there are some conjectures and worries, it is for certain, that the Australian cannabis space is positioned well to grow and reap benefits in future.

The product would be launched and marketed under THC Global’s Cannedo brand, a step representing a major milestone for the company as well the Australian industry. This plant-to bottle processing authenticates THC Global’s farm-to-pharma approach, laying the foundation for the company to scale up cultivation & extraction process in 2020.

THC Global is placed well in the flourishing cannabis space to reap benefits from the future of medicinal cannabis within Australia and globally.

AusCann’s strategic implications is focused on global cannabis market developments. With the recent outbreak of lung injury and deaths linked with the use of vaping products including cannabis vape pens. AusCann while ditching producing products for inhalation, develops hard-shell capsules that offers a safer mode of administration to vaping or smoking.

With regards to various regulatory and compliance issues impacting the entire cannabis industry, AusCann is strictly follows the Therapeutic Good Administration (TGA) and the Office of Drug Control (ODC) guidelines and licences.

Defeating several impediments & challenges to market access for cannabinoid-based medicines including by lack of standardisation, medical acceptability and regulatory constraints, AusCann is focused on the value-additions to address investors unmet needs by delivering reliable, stable and standardised cannabinoid-based pharmaceutical products as well as produce clinical evidence to underpinning market access.

AusCann’s considerable R&D breakthrough was the fruitful conclusion of capsule product development. AusCann has clear road to market strategy underpinned by strong funding, the company is on the right track to achieve its goal of delivering consistent and stable dosage proprietary capsules.

These industry developments required, CANN group to reset its production expansion plans and revise the construction of its state-of-art Mildura Facility underwritten by an offtake agreement with Aurora that significantly impacted its share prices.

However, the company continues to focus on its long-term strategic goal, as well as continue to put together the building blocks to achieve those goals with a determination to attain valuable progress over next 12 months.

Cann Global, despite several substantial hurdles and challenges, including supply constraints, and an extended period of unfavourable weather conditions, achieved significant milestones in last one year and achieved $1.089 million in consolidated revenues prior to its relisting on ASX.

Cann Global is pursuing a strategy of diversification to flourish its business model by establishing an ecosystem of hemp seed farming suppliers. Within Australia, the company is building its production, manufacturing & product selling facility and on a global level by addressing head-on, existing challenges and hurdles confronting the global cannabis and hemp seed markets.

Officially granted by the Irish Ministry of Health, CannEpil® is the first EU-GMP pharmaceutical grade, cannabinoid-based medicine authorised for prescription and sale under the Irish Government’s Medical Cannabis Access Programme, and it is anticipated that this move would accelerate the approval process in the key EU markets.

Financial year 2019 has been outstanding in delivering real operational progress for MGC and achieving key milestones on its ‘Seed to Pharmacy’ strategy of establishing an international bio-pharma company targeting production & development of phytocannabinoid derived medicines.