There are more than 280 companies in the financial sector domain that are listed on the Australian Securities Exchange. Some of the factors that govern financial stocks are the regulations & policies of the governing body, interest rates, inflation, state of the economy & its outlook etc.

Sezzle Inc. (ASX: SZL) on December 9th, 2019 posted an update on a very strong growth in sales during Black Friday/Cyber Monday period. Generally, this period which is of four days is considered the starting of the holiday shopping season. During this period, Sezzle added more than 36,000 new active customers, compared to the 8,000 new active customers added during this four-days shopping period in 2018, which represents a whopping growth.

However, the use of credit cards for retail purchases have declined as the shoppers were using other forms of payments, which is reflected by the PYMNTS survey of 2000 consumers. According to this survey, the instore utilisation of credit cards by shoppers for payment has fallen from 50.2 percent of shoppers during last year to 49.3 percent this year. Further, shoppers are also using less of cash for the payments as the cash payments have also decreased from 39.3% to 36.3%. The usage of credit cards for online shopping, have also dropped from 66.4 percent of shoppers last year to 54.3 percent this year.

AUM is declining on the back of redemption of MAS transitioned assets:

Navigator Global Investments Ltd (ASX: NGI) for fiscal 2020 expects EBITDA to be of approximately $33.5 million, which is in line with the EBITDA of $17.6 million reported in the second half of FY 19. 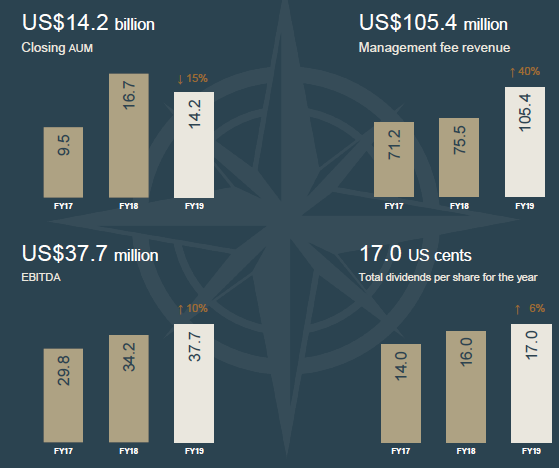 MyState Limited (ASX: MYS) on 10 December 2019, notified the market that CRCA, an innovation support group, has joined the company as a new consumer. This would further expand the companyâs business banking for industry associations.

Moreover, the company has started back office automation which will change its operating model & cost profile. MYS intends to launch a new funds management platform. Meanwhile, MYS was trading at a P/E of 13.810x. On 11 December 2019, MYS was trading at $4.78, up by 1.271 percent (at AEST 2:01 PM).

Strong growth in Funds Under Management:

Money3 Corporation Limited (ASX: MNY) for FY 19 has reported 25% growth in the revenue, 17.3% increase in the Underlying Earnings Before Interest, Tax, depreciation and amortisation (EBITDA) and 14.2% rise in the underlying NPAT to $24.2m.

During the first quarter 2020, the company went for strategic acquisitions in both Australia and New Zealand for expanding the consumer automotive receivables. For FY 20, the company projects the dividend to be minimum of 10 cents.