Let us have a look at 4 health care stocks and their latest ASX updates:

CLINUVEL PHARMACEUTICALS LTD (ASX: CUV) is a global biopharmaceutical entity aimed at advancement and supply of medication options for patients suffering from an array of acute genetic and skin diseases. 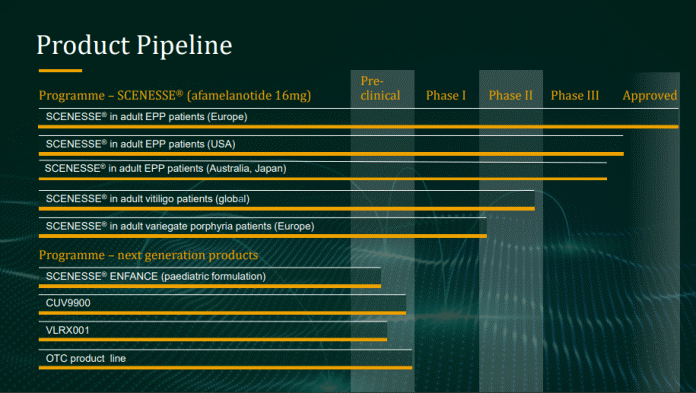 As per the latest market announcement dated 23 September 2019, the company appointed Susan (Sue) Smith, as Non-Executive Director of the Group’s Board of Directors. Mrs Smith is an accomplished, all-rounder health care executive having several years of experience, with her expertise in execution of operational strategies in a complex and critical care environment also in the interaction with health care authorities and UK regulators.

Mr Stan McLiesh, CLINUVEL’s Chair was pleased to welcome Mrs Smith on Board and stated that her diverse skill and extensive experience would add to the depth of experience of the existing CLINUVEL Board, and would guide the company’s future growth, as well as aid in progressing the operational strategy predominantly within the context of the ongoing European commercialisation program.

The company also announced recently, that the safety and effectiveness data acquired from erythropoietic protoporphyria (EPP) patients treated with CLINUVEL’s principal candidate, SCENESSE® (a formulation of synthetic peptide afamelanotide 16mg), would be presented at a biennial rare disease conference, the International Conference on Porphyrins and Porphyrias (ICPP), in Milan, Itlay in September 2019. SCENESSE® is a first-in-class drug targeting erythropoietic protoporphyria (EPP) with Phase II and III trials being completed in the US and Europe.

Melbourne headquartered biopharmaceutical company, PolyNovo Limited (ASX: PNV), that recently secured its place in S&P/ASX 200 Index during the periodic index rebalancing, is focused on developing innovative, biodegradable, patented polymers used in the manufacturing of medical devices. At present, PolyNovo is engaged in the development and marketing of its lead device, NovoSorb, used for treating surgical cuts, burns, hernia reparation, orthopedic and reconstructive surgery. 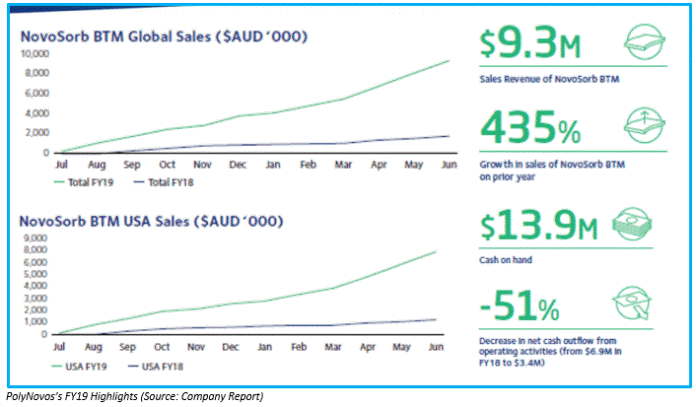 In an announcement dated 16 September 2019, the company appointed Mr Ed Graubart as Senior Vice President of PolyNovo North America LLC replacing Mr Kevin Whiteley. Mr Graubart with more than 29 years of experience in the orthopaedic medical business, would directly look after all sales and marketing related activities in the United States business, allowing PolyNovo to rapidly scale up its American sales and marketing. Considering his vast experience in sales, PolyNovo had issued him with one million share options at a striking price of $1.55 that would be vesting over the next 5 years period, with options vesting to 250,000 on 13 August 2021 then a further 250,000 each year in August up until 13 August 2024.

The company also provided an update on the pivotal trial as announced on 13 September 2019.

Stock Performance: PNV’s shares last traded flat at $2.24, with a market capitalisation standing at $1.48 bn and 661.09 mn outstanding shares. The company has generated a tremendous YTD return of 273.33%.

In the recent announcement, Summerset Group Holdings Limited issued 928,017 Ordinary Shares to the shareholders elected to participate in the Dividend Reinvestment Plan on 9 September 2019. The issue price per security amounts to $5.8336. The percentage of total class of financial products issued is 0.4108%. Total number of Financial Products of the Class after the issue (excluding Treasury Stock) and the total number of Financial Products of the Class held as Treasury Stock after the issue stands at 226,827,675 Ordinary Shares (nil held as treasury stock). Issue of 928,017 Ordinary Shares is in accordance, with the terms of the Dividend Reinvestment Plan Offer document dated 29 April 2016.

In another announcement, the company reported that it had paid dividend equivalent to NZD 0.064 per ordinary share to its shareholders, on 09 September 2019.

As per the 1HFY19 results for the period closed 30 June this year, released on 13 August this year, the company generated a profit of NZ$47.8 million, which increased by 6% on the previous corresponding period. The stated PAT for the given duration was NZ$92.6 million, which decreased by 4% as compared to the pcp. The company’s total assets for the period amounted to NZ$3.0 million, which is an increase of 24% compared to pcp. An interim dividend amounting to NZ 6.4 cps had also been reported by the company.

Stock Performance: Metlifecare Limited, trades under the code MET on NZE (NZE: MET). MET’s stock last traded on 23 September 2019, at a price of NZ$4.46, moving down by 0.22 percent from the previous close. Metlifecare has a market cap of NZ$953.47 million.