The Dividend Stance With These Telecom Players – TLS, VOC?

The telecommunication sector comprises of companies which facilitate communication across the world, either through phones, the internet or through airwaves or cables, wires or wireless modes.

The telecom sector can be categorised under sub sectors like telecom equipment, telecom services and the wireless communication.

The major source of revenue generation in this industry is through telephone calls. However, the trend is changing with the advancement in network technology and the telecom industry is not limited to merely making phone calls but has reached a level where people are inclined towards the video, text, and data measures.

High-speed internet access which offers computer-based data applications, have become popular for personal and business use around the world. Big organisations are more concerned about the reliability and quality of the calls and secure data transfer. In order to meet the requirement, companies are ready to pay premium charges to telecom players.

In this article, we would look at two major companies from the telecommunication industry in Australia, Telstra and Vocus- look at their past performances and examine if the stocks are good for dividend.

Telstra Corporation Limited (ASX: TLS) is a provider of telecommunications and information services like mobiles, internet and pay television in Australia.

The decline in the EBITDA was due to the nbn impact, where the company had taken care of ~ $600 million of negative recurring EBITDA headwind during the period. As per the company’s estimation, nbn impacted the EBITDA by $1.7 billion since FY2016. The calls at the call centres dropped significantly by 22%.

The company also made a strong progress T22 strategy under which the company aimed to establish a connected future so that everyone thrives. The company during the period reduced the number of Consumer & Small Business plans from 1800 to 20 in the market. It also announced no lock-in plans across fixed and mobile in Australia and reduced the data charges.

Dividend in FY2019 and in the past 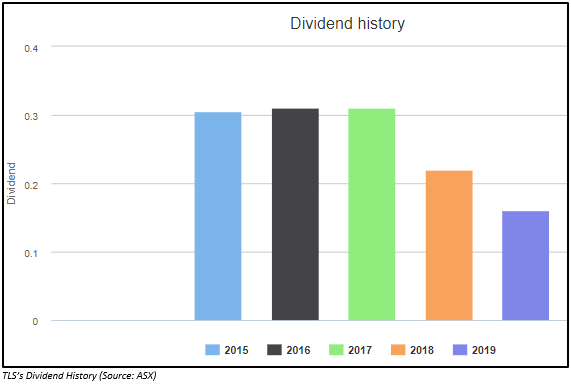 However, post the release of NBN Co’s corporate plan for 2020 and their outlook for FY2020, Telstra amended its guidance, depicted below:

Although TLS is exposed to challenges due to the nbn impact, the launch of the 5G network would support the company in the future. Recently at the Telstra Vantage 2019, the company highlighted various innovative products beginning from 5G to IoT. Australian citizens are also noticeably adopting IoT, which is connected to the networks of the company. These factors are likely to help TLS deliver great results in the future and consequently influence the dividend

Dividend in FY2019 and in the past

The company did not declare its final dividend for FY2019 which ended 30 June 2019. VOC closed a new and enhanced syndicated debt facility with its lenders. Under the Syndicated Facility Agreement, the dividend would not be provided by the company unless its Net Leverage Ratio is below 2.25x for two consecutive testing dates. (Leverage ratio explains the capital amount that the company generates through debt and through equity). 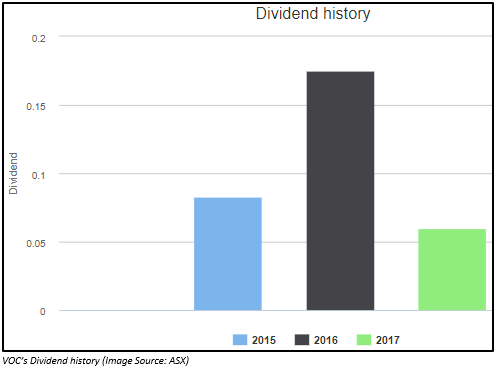 FY2019 for VOC was challenging as depicted by the Group’s EBITDA and NPAT. In the retail segment, the EBITDA was impacted due of loss in higher margin legacy products which were partially offset by lower margin NBN. The company did not provide dividend to its shareholders as its Net Leverage Ratio was not below 2.25x for two consecutive testing dates. It would be interesting to watch VOC unfold its strategies in the coming days.