The S&P/ASX 200 Index settled in the green zone on 27 August 2019 after moving upward by 0.48% to settle at 6,471.2. The following ASX-listed companies from the communication services sector have reported financial results for the year ended 30 June 2019. Letâs take a glance at how these companies performed during the year.

Amaysim Australia Limited (ASX: AYS), an Australia-based provider of mobile services, reported a net loss after tax (continuing operations) of $ 6.53 million in FY19 ended 30 June 2019, while reporting a 7.8% decline in statutory net revenue to $ 508.3 million in the financial year 2019. The companyâs performance during the period was impacted by a challenging environment in the energy market and a cutthroat competition in the mobile market.

Further, on a comparable basis, the company witnessed a 33.3% decline in underlying EBITDA to $ 36.1 million in FY19. There has been a 56.5% fall in the mobile underlying EBITDA to $ 13.6 million and a fall of 1.7% in energy underlying EBITDA to $ 22.5 million in the reported year. On a comparable basis, gross profit of the company remained stable at $153.7 million in FY19 compared to $ 155.2 million in the same period a year ago, while gross margin expanded by 194 basis points to 30.1%, on the back of strong margins in the energy segment and also due to the strength of the companyâs mobile wholesale agreement. AYS registered a 16.2% rise in energy gross profit to 85.4m due to disciplined management of margin. However, on a comparable basis, there has been a 16.4% decline in mobile gross profit to $ 68.3 million in FY19, though the segmentâs gross margin remained strong at 33.6%.

Overall at the end of FY19, the companyâs cash and cash equivalents increased by $ 20.9 million to $ 30.7 million due to the increase in funds after a capital raise of $ 50.6 million in the month of February 2019.

Amaysim Australia is hopeful for medium to long term outlook, despite the challenges in mobile and energy. Meanwhile, for fiscal 2020, the company expects underlying EBITDA to fall versus FY19 and is projected to be in the range of $ 33 million to $ 39 million compared to $ 47.3 million in FY19 (on a New GAAP basis). The company anticipates that unprecedented changes in the regulations in the energy sector would put pressure on the retail energy margins. It is expected that lower energy consumption would continue. The energy segment earnings for fiscal 2020 would be impacted.

Victoria-based vertically integrated telecommunications provider, Vocus Group Limited (ASX: VOC) released its full-year results for FY19 on 22 August 2019, reporting a 17% fall in underlying NPAT to $ 105.5 million. Meanwhile, the company posted a 2% decline in underlying EBITDA (excluding share-based payments) to $ 360.1 million for FY19, on the back of VNS growth at lower margin driven by one off project revenue and wholesale NBN. 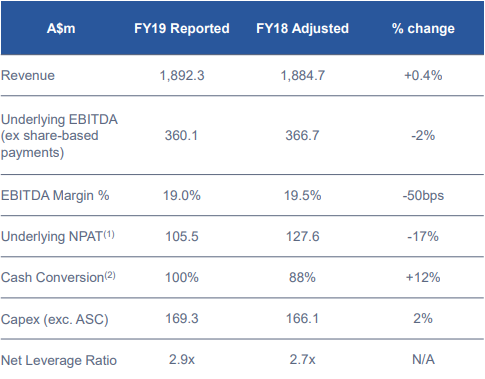 Telstra Corporation Limited (ASX: TLS), a communication services sector player, on 16 August 2019 announced that the companyâs total value of assets monetised as part of T22 stands at approximately $ 1 billion, on the back of recent changes to Telstra Ventures, sale of the Edison Exchange building in Brisbane, and other smaller transactions and the agreement signed for part sale of an unlisted property trust for owning 37 of Telstraâs existing exchange properties. The company has a goal of monetising up to $2 billion of assets by the end of fiscal 2020 for strengthening the balance sheet.

Meanwhile, TLS announced in a release of full-year results on 15 August 2019 that since FY16, the company has reached a cost reduction of $ 1.17 billion and expects to achieve the net cost reduction target of $ 2.5 billion by FY22. 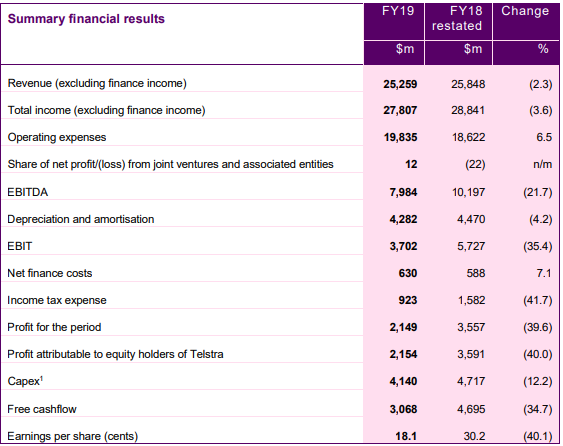