Amid growing geopolitical tensions, reputed initiation of the easing cycle is going on to stimulate the economies by few advanced economies; Iron ore price has been reaching higher highs this year due to the global supply shocks. At present time, Brazil and Australia dominates the iron ore exports in the world while the largest consumer of the material is China.

Let’s have a look at the major supply sources of Iron-ore worldwide:

In January 2019, the destruction of Vale-owned tailing dams in Brazil resulted in over 200 deaths. The Department of Industry, Innovation and Science had acknowledged that the largest impact on seaborne supply was caused by the Vale incident in its ‘Resources & Energy Quarterly June 2019’ report. Accordingly, the adverse weather conditions in Brazil have also contracted production levels.

Besides, Vale acknowledged a drop of 90 million tonnes due to the incident, and it would take a two-three years’ time to arrive at the pre-incident target of 400 million tonnes. Further, an upside was noticed after a court appeal overturned the prior decisions, and production at the Brucutu mine of Vale SA was commenced.

According to Resource & Energy Quarterly June 2019 report, the iron ore export earnings have been estimated to have clocked $75 billion or 23 per cent increase in 2018-19 period. Also, this has been profited by escalating prices, which offsets lower production that was impacted by weather conditions. Besides, the producers in Australia also favoured the exchange rate and prices between high and low iron ore grades. 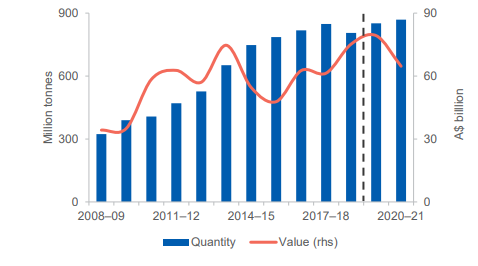 Further, Cyclone Veronica had impacted the iron ore productions in the Pilbara region, and the export volumes declined by 5.2% on year-over-year basis, during the March quarter to 188 million tonnes. Moreover, the iron ore exploration expenditure in Australia increased by 18% on year-over-year basis to reach $59 million in the March quarter 2019, which depicts the strongest growth since 2012.

Let’s now look at the largest consumer of iron-ore:

According to media reports, the upsurge in prices of iron ore led to the initiation of an investigation on the price monopoly by China Iron & Steel Association (CISA), and iron ore inventories have been declining at the largest ports in China. Steelmakers in China have been accusing the future traders of the manipulation in iron ore prices. Further, government spending on domestic construction might push the demand for steel. Moreover, the local government have been promoting investments in infrastructure and construction that would require more steel.

During June 2019, the production of Chinese stainless steel was at 2.34 million metric tonnes, slipping by 2.34% compared to the prior month. Nevertheless, Chinese steel mills are looking to tap the premium prices of the steel and better margins through increased production.

According to media reports, Chinese mills are looking to procure raw material at a reasonable price while global supply shortage arising from Australia & Brazil, and growing demand for steel production is burning the port inventory. Currently, the stock levels at the port do not complement equally to the level of demand in the market, which has been rocketing the prices of iron ore.

According to National Bureau of Statistics of China, the crude steel output for the month of March, April and May 2019 has been 80.32, 85.03 and 89.09 million tonnes, respectively. It appears that the production in China is not slowing down despite the rise in the price of iron ore.

At the outset, the demand from China is not showing any signs of slowing down, and the supply side revival in Brazil like the pre-incident appears unlikely in the short-term period. Therefore, any correction in the prices of iron ore is unlikely in the short-term. Moreover, the developments on the complaints by steel manufacturers might weigh in if there could be any decision made on it by CISA.

If the demand for the iron ore in the Chinese steel mills is prolonged, the iron ore mining companies would continue to perform better. Further, any developments in the supply side might affect the investment sentiments.

Rio Tinto Limited (ASX: RIO) is a pioneer in mining and allied industry. The group has been in business for almost 150 years demonstrating expansion, exploration, diversification and innovation. Currently, Rio Tinto stands as one of the largest producers in a range of materials.

On 19 June 2019, the company had released the update on Iron Ore guidance. Accordingly, the company had acknowledged challenges related to the operations at the mine, in the Greater Brockman in the Pilbara region. Also, the outcome of it was in the rise of proportion of lower-grade products of the company to safeguard the quality of the Pilbara Blend.

Pilbara Project: On 16 July 2019, the group, in its Second Quarter Production results, reported that the Koodaideri iron mine has been progressing with the procurement, construction and such activities. Further, it expects the first ore from the mine by late 2021 period.

2019 Guidance: Reportedly, the company has also revised unit cost guidance for 2019, which is now for $14-15 per tonne from the earlier range of $13-14 per tonne; this includes costs for additional waste movement in mines in the second half and an overall reduction in shipments.