Iron ore prices took a hit in the international market despite the inventory shortage. The prices of iron ore future of the most actively traded September series on the Dalian Commodity Exchange (DCE) fell from the level of RMB 911.50 (Day’s high on 3rd June 2019) to the level of RMB 816 (Day’s low on 5th June 2019).

The prices plummeted more than 10 per cent from its recent peak after the China Iron and Steel Association (CISA) mentioned that a national department would investigate the soaring iron ore prices and would crack down on the price monopoly.

However, the prices recovered from its low of RMB 816 to RMB 845 before ending the session on 5th July. But the prices again saw a gap down opening yesterday in China, where the DCE September series started the day’s session at RBM 829.0, down by almost 1.90 per cent from its previous settlement.

Likewise, the iron ore futures of the most actively trading July contract on the Chicago Mercantile Exchange fell from the level of US$123.19 (as on 2nd July 2019) to the level of US$117.10 (as on 5th June), down by almost 5 per cent over the pressure from the Chinese market.

Supply Dynamics: The iron ore inventory across the 35 significant Chinese ports declined for the 11th consecutive week to shoot-up the prices in the international market. As per the data, the iron ore inventory across those ports stood at just 105.80 million tonnes on 5th July, down by 0.82 per cent or 0.88 million tonnes from its previously reported level.

The shortfall in inventory coupled with stagnant demand supported the iron ore prices, and the prices zoomed in the international market until recently.

Further on the supply side, the Australian Department of Industry and Innovation (DIIS) recently announced the expected export fall for 2019 from the Australian ports amid the domestic production loss from lousy weather.

China Steel: In June, China’s stainless steel output stood at 2.34 million metric tonnes, down by 2.34 per cent from previous month amid lower production from mills due to cost concerns, which in turn, supported the steel prices in the domestic as well as in the international markets.

As per the market experts, the stainless steel across China is expected to inch up to 2.5 million metric tonnes in July, as the Chinese steel mills are again increasing the production amid higher steel prices in the market and better profit margins.

Further Outlook: The high steel prices of rebar steel and better profit margins are expected to prompt the producers to ramp up the production in July. Apart from the falling inventory, another factor which supported the steel prices was the production cut in China at the beginning of July.

The lower steel inventory coupled with higher profit margins of around 380 yuan per metric tonnes could again support the iron ore prices in the international market; however, the investors should keep a close eye on the actions of CISA formed committee, which contains a potential risk to the iron ore prices and could further lead to a possible short-term price correction.

On a daily chart, the iron ore prices are moving in a continuous uptrend; however, the prices have taken the hurdle of the standard deviation (upper purple line) of 20-days simple moving average. Post taking the hurdle the prices fell.

Recently, the prices made a new high; however, the 14-days Relative Strength Index failed to do so.

Post understanding the iron ore movement and the demand and supply dynamics, let us now take a look over the Australian mammoth iron ore miners who capture a plethora of the Australian iron ore supply chain.

Rio’s operations in the Pilbara region took a jab from the Tropical Cyclone Veronica, which in turn, caused a disruption in the company’s daily operations and damaged the Pilbara projects, which supply the highly sought after Pilbara Fines iron ore.

Post witnessing the supply loss, Rio also declared a production halt amid compromised quality in its Pilbara Fines and coupled with an annual production loss, the production halt supported the iron ore prices in the international market.

The high prices supported the company’s share on ASX, and Rio moved up and registered a new 52-week high in a continuous momentum until recently.

On the chart shown above, we can see that the share price of the company carefully traces the movement in iron ore. While the iron ore prices managed to cross the upper band (standard deviation) of 20-days simple Bollinger Band, the company’s share failed to do so.

The share price of the company, when tracked against the S&P/ASX 200 Index, revealed that the shares of the company closely moves in tandem with the index, and in the past sixth month, Rio outperformed the index due to high total returns amid  increased iron ore prices.

Rio’s 5-years monthly Beta against the market index stands at 0.97, which in turn, suggests that a one per cent move in the market brings about 0.97 per cent leap in the Rio’s share price. Supported by the rising index and high iron ore prices. Rio moved to make a new 52-week of A$107.940 (on 3rd July 2019)

On a daily chart, the share price of the company is now facing resistance around the level of approx. A$108. The recent plunge in iron ore dragged the Rio’s share as well; however, the price could take the initial support around the 61.8 per cent Fibonacci Series, which is at A$100.925, or around the 50-days exponential moving average (EMA), which is at A$101.142.

BHP’s operation also took a hit from Veronica, and the company declared an annual production loss in the range of 6 to 8 million tonnes. Post the production loss the company also faced a lawsuit of US$5 billion in the Samarco case. However, the high iron ore prices hosted the share to trade on premium, and the total returns in the past sixth month outperformed the S&P/ASX 200 Index.

BHP’s 5-years monthly Beta against the market index stands at 1.19, which in turn, suggests that a one per cent move in the market brings 1.19 per cent leap in the BHP’s share price. Supported by the rising index and high iron ore prices. BHP moved to make a new 52-week high of A$42.330 (on 3rd July 2019). 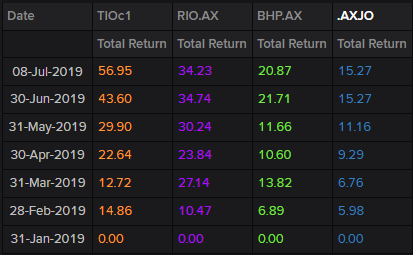 When compared from the closing price of 31st Jan 2019 to the current market price, Iron ore prices (TIOC1) outperformed the total returns from other assets. The high iron ore prices also supported the share price of the Australian iron ore miners, which in turn, further supported the S&P/ASX 200 (AXJO) Index as well, since RIO and BHP form substantial contributors to the index construction.