Should you look at Propel Funeral Partners’ Share Price?

The death care industry is the provider of important service to people as well as families who are handling with or preparing for, death and sorrow. It comprises of morgue services, cremation of dead body, organising and conducting a funeral, burial as well as memorialisation. 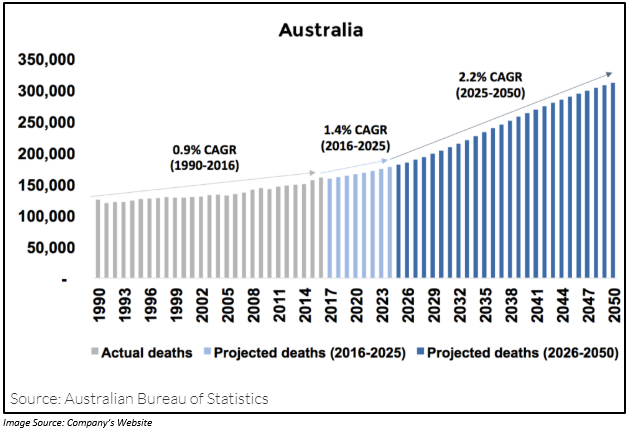 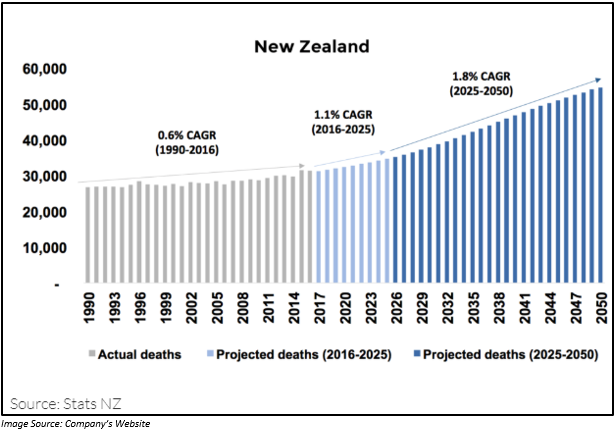 In the below article, we will look into the recent developments of one of the death service providers, Propel Funeral Partners Limited.

Propel Funeral Partners Limited (ASX: PFP) is a provider of death care services. It ranks amongst the biggest private providers of death care services in New Zealand as well as in Australia. The company has funeral homes, cemeteries, crematoria and related assets which are located in places like Queensland, Victoria, New South Wales, Tasmania, Western Australia, South Australia as well as in New Zealand.

During Q1 FY2020, the company performed a record number of funerals. There was an increase in the funeral volume in Q1 FY2020 as compared to the previous corresponding period. As a result, the revenue also increased by 19% to $28.9 million and operating EBITDA by 38.3% to $8.9 million as compared to Q1 FY2019.

The Average Revenue Per Funeral increase was in between 2% to 4% over that in FY19.

The company during the financial year ended 30 June 2019 reported a strong result in spite of below-trend death volumes in most of the markets in which the company operates.

A Glance at the Funeral Volume in FY2019: 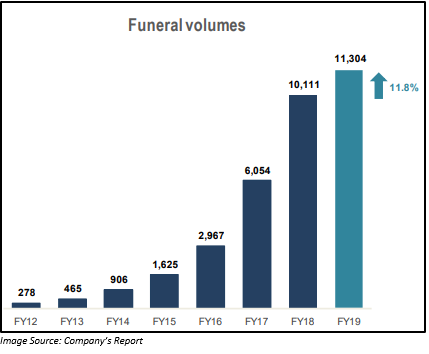 The company remained consistent with the investment strategy during FY2019. Below is the list of acquisitions made by the company during the period.

On 19 August 2019, the company signed a conditional sale agreement to obtain the complete issued share capital of Codfern Pty. Ltd along with three substantial freehold properties along with a parcel of vacant land on the Sunshine Coast in Queensland.

The company is looking for further opportunities for potential acquisitions in line with its investment strategy. The company recently expanded its senior debt facilities to $100 million with Westpac Banking Corporation (ASX: WBC). On 26 August 2019, the company’s net cash held was $8 million.

The company is well positioned to derive benefits from the acquisition during FY2019 along with its probable future acquisitions.

July 2019 was a positive start of the company In FY2020 with the record in the number of funerals performed by the company and also achieved an average revenue per funeral growth in the range of 2 to 4%.

Based on the past performance of the company along with the acquisitions made, it appears that the company would continue to excel in the upcoming period. Also, as per the data and forecast of the death in the Australia and New Zealand, the growth in the death rate will help the company to improve further in the future. This in turn would impact the share price of the company and also benefit its shareholders.