The below-mentioned stock belongs to the funerals, cremation and memorials services industry or commonly known as the death care industry. These stocks have fabricated strong operational progress in the recent past and in addition, have also provided significant returns to its shareholders in the past few months. Let’s take a quick look at the performance of these stocks.

A leading funeral service provider, Propel Funeral Partners Limited (ASX: PFP) recently completed acquisitions of Morleys Group, Waikanae Funeral Home and Kaitawa Crematorium. The company has been building on its strong and long history of acquiring and integrating profitable acquisitions of private businesses, tie-ups, infrastructure and related assets, which operates within the death care industry in Australia and New Zealand.

The company operates in the death care industry, which provides essential services to individuals and families dealing with or preparing for, death and bereavement. This includes the collection and transfer of the deceased, mortuary services, embalming, arranging and conducting a funeral, cremation, burial and memorialisation. Propel was founded in FY2012 with one funeral home and since has experienced significant growth, successfully expanding its geographical presence and diversifying its operations through the completion and integration of 24 profitable acquisitions. Propel’s location footprint is difficult to replicate as many of its funeral homes have been operating since the late 1800s and early 1900s. Propel has a strong presence in the regional areas of New South Wales, Victoria, Queensland, Tasmania, South Australia and New Zealand along with an emerging metropolitan presence. The financial year 2018 was a milestone year for Propel, with a key highlight being the company’s successful debut on the ASX on 23rd November 2017.

The profit for the half-year period increased by 100% to $6,421,000 as compared to the pcp. The company reported a gross profit margin of 70.2%, which was 0.8% higher than 1H FY18, due to the financial contributions of recent acquisitions and price increases.

The company’s operating EBITDA (Earnings before interest, tax, depreciation and amortization) increased 6.4% on 1H FY18, primarily on the back of impact of six acquisitions completed in FY18 and 1H FY19. As at 31st December 2018, the company had net cash of $10.3 million of cash with no senior debt. 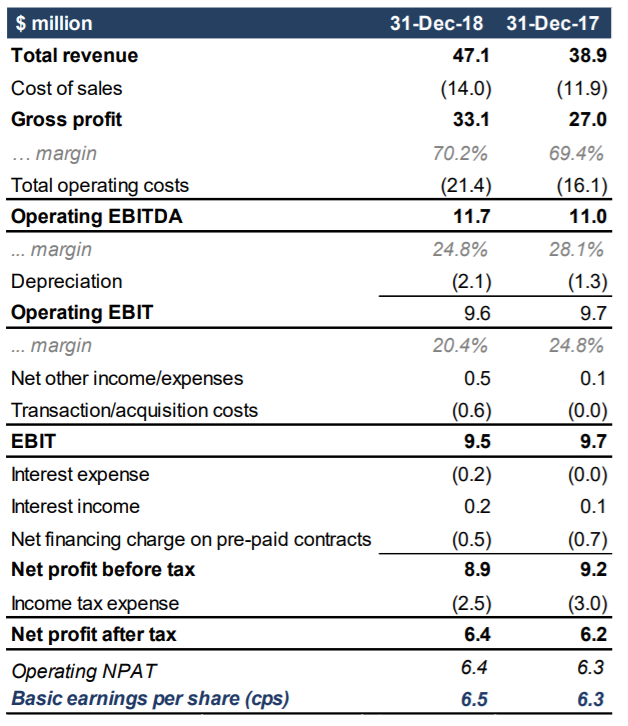 At the end of the half year period, the company had a strong and conservative balance sheet with further debt capacity. Together, with the positive operating cash flows and freehold assets, the company carries enough financial flexibility to support future dividends and growth initiatives. 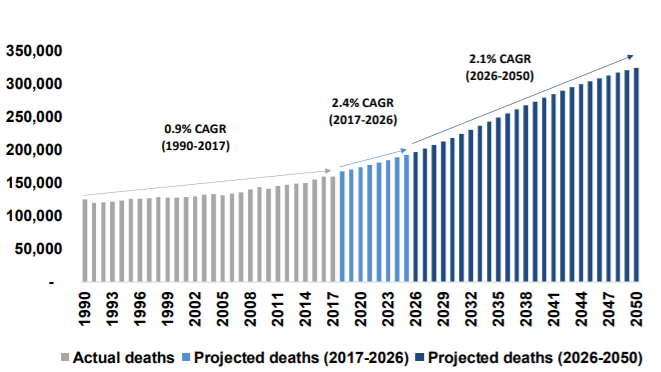 Demand for death care services is expected to grow in Australia and New Zealand as a result of increasing death volumes due to population growth and ageing of the “baby boomers”.

On the stock performance front, the company’s stock has provided a return of 29.88% in the last six months as on 25th June 2019. With the recent expansion through acquisitions and strong financial and stock performance in the recent past, Propel Funeral Partners stands tall from a defensive angle.

International funeral services provider, InvoCare Limited (ASX: IVC) showed significant progress in implementing both of its growth strategies (Protect & Grow and Regional Acquisitions) in 2018, despite soft market conditions, which impacted the operational performance of the business.

As part of Protect & Grow, the company is spending a net $200 million across three core streams – Network and Brand Optimisation (NBO), People and Culture and Operational Efficiencies. The company also invested $70.6 million in the last year to acquire 11 businesses to both in-fill its core markets (Adelaide and Auckland) and extend its market coverage into new regional areas. The rationale for 11 acquisitions has been driven by the detailed demographic and market analysis undertaken through the company’s Protect & Grow program. This work identified a shift in the demographic profile in metropolitan areas, where people are taking either a ‘sea’ or ‘tree’ change in retirement. By securing high quality businesses in high growth markets, the company has demonstrated its commitment to creating long term value.

In the month of March 2019, the company announced an $85 million fundraising, a step taken by the company after meeting with many of its shareholders post the full year results, where there was a clear preference for InvoCare to continue with the strong momentum generated by both growth strategies in 2018. The company was conscious of the need to balance surety of securing capital at a minimal discount and introducing high quality new investors, ensuring that the existing investors were not unduly diluted.

The FY18 net profit after tax was down 57.7% on the PCP to $41.2 million, primarily from the impact of the mark-to-market valuation of prepaid contracts in 2017, which included a significant gain due to property revaluations.

The company’s growth strategies ensure that the company is building on its core business and fulfilling the changing needs of customers for a contemporary funeral service, through investing in locations, brands, systems and people to deliver the highest level of customer service.

Due to a significance on IVC operating results and the inability to accurately forecast the severity of the flu season, IVC has not yet provided a full year forecast. On the stock performance front, the company’s stock has provided a return of 51.87% in the last six months as on 25th June 2019. With the recent strong financial and stock performance of the company, Invocare Limited can be considered as a good stock from a defensive angle.