Should Investors Be Threatened By These Loss-Making Companies? – IVO, SAS, BRN, SOR, DCC

As per the latest financial reports of the five companies, they have reported losses due to several unavoidable factors. Invigor Group reported a loss of ~$12.33 million in FY18 results. Despite the loss, the company?s platform is well placed to capitalise on growth opportunities. Sky and Space Global also continued to achieve significant milestones within the satellite communications industry, while incurring a loss of $3.14 million in 1HFY19. Brainchip Holdings reported losses with simultaneous increase in the amount of cash outflows in operating activities, reflecting continued focus on attaining business milestones and group strategies. Strategic Elements reported a loss of $1.26 million owing to funding of project developments. DigitalX witnessed a loss in 1HFY19 due to lower revenues from token advisory which was consistent with the overall market trend for crypto assets.

Now let us have a detailed look at the latest updates on the stocks, to provide a bigger picture of their respective business performance.?

In another recent update on 30 July 2019, the company notified that several multi-national groups have chosen its Shopper Insights and Loyalty as the product of choice, to help boost their revenue.

Other Recent Developments: The company recently entered into a Joint Venture agreement with NZ?s Enring Group to scale up its WeChat Pay-powered e-commerce operations in Asia. Invigor also acquired the Sun Asia Group adding substantial revenue from the Australian-farm produce supply contracts to Asia and India. In addition, the company has an order book that has an approximate worth of $30 million. The Sun Asia Group recently entered into a sale agreement for A$25 million/year, for the supply of Australian produce to Asia. Overtime, the company has also grown its partnership with Winning Group and WeChat. 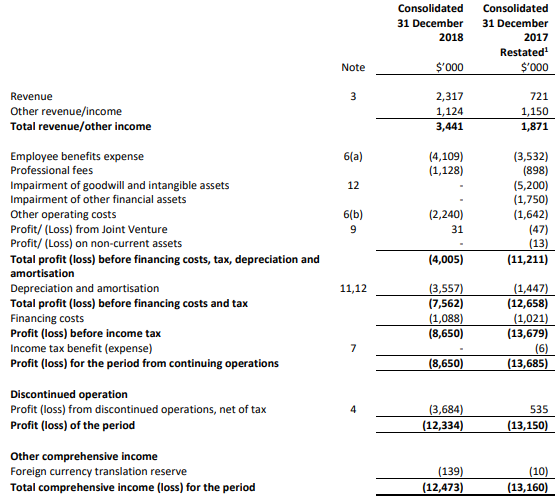 The stock of the company closed the market session, at a price of A$0.003, reporting no change on the previous trading price (as on 31 July 2019). The stock has a market capitalisation of A$8.57 million.

Highlights of June Quarter: On 31 July 2019, the company published June quarter report, wherein it was mentioned that during the period ended 30 June 2019, SAS reported continued growth of post launch distribution networks and revenue channels owing to signing of six additional reseller agreements. In addition, the company secured eight MOUs that broadened its launch capabilities and added to commercial opportunities. As at 30 June 2019, the company had a cash balance of ~A$2 million.

Loan Agreement: The company recently, in May this year notified that it has executed a convertible loan agreement for an amount of US$1.1 million, with Telefox Ltd. The funds will be utilised for providing working capital to support the company achieve its goals.

Agreement with GomSpace: The company also inked a deal with GomSpace to deliver its newly designed 6U nanosatellites. The agreement would involve manufacturing of an additional fleet of nanosatellites by Gomspace, to support a Global Coverage constellation. The agreement would enable the company to extend its services to new markets including Russia, China, South Africa, Australia, Canada and Argentina. In addition, the agreement is expected to support higher revenue generation with the added coverage capability. 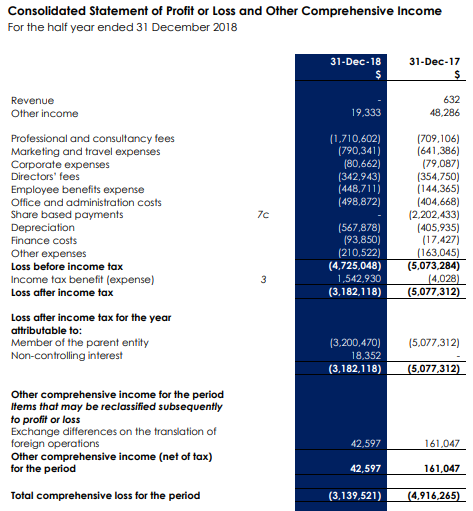 On 19 July 2019, SAS had requested for the voluntary suspension over its shares on the ASX, while it continues to move ahead with the conclusion of financial arrangements along with its hunt for the two non-executive Directors. The company anticipates the voluntary suspension to come to an end, no later than the beginning of the trading session on 15 August this year.

Key Developments: In the month of June this year, the company signed a definitive agreement with Socionext Americas for the collective development of the Akida NSoC. The company also signed a convertible securities agreement with CST Capital Pty Ltd as trustee of the CST Investments Fund. Under the agreement, the company received an advance of US$2.85 million. The company also raised approximately A$10.7 million under an Entitlement offer at a price of US$0.06 per share.

During the period ended 31 December 2018, the company reported revenue amounting to ~US$0.95 million, up 252% on prior corresponding period revenue of ~US$0.27 million. During the period, the company incurred a net loss after income tax of ~US$16.52 million, as compared to a net loss of ~US$13.77 million in 2017. The company witnessed a substantial rise in research & development expenses owing to increase in the number of technical staffs employed, costs related to new projects & increase in amortisation expense of intangible assets. R&D expenses during the year amounted to ~$3.97 million, up 80% on pcp expenses of ~$1.76 million. 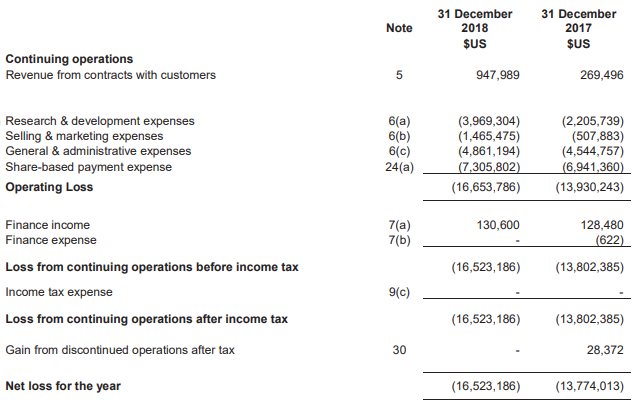 Drilling Agreement: On 3 July 2019, the company reported that it has executed an agreement with the Western Australian Government for a funding of $150,000, for the purpose of drilling at the Behemoth Project in the remote Gibson desert. The project is said to have large gravity and IP geophysical anomalies & has a potential for nickel, copper, gold and rare earths.

During the half- year ended 31 December 2018, the company incurred a loss amounting to ~$1.26 million, as compared to a loss of ~$0.94 million in the prior corresponding year. Loss during the period was attributable to funding of project developments conducted through the group?s subsidiaries and the costs associated with operating an Australian company listed on ASX. 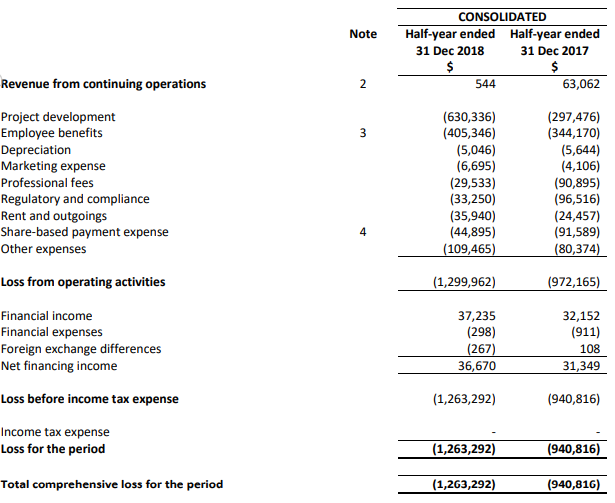 Board Changes: Post June quarter this year, the company announced changes to the Board including resignation of Mr Stephen Roberts and Mr Sam Lee. The company also announced the re-appointment of Mr Toby Hicks as the non-executive chairman.

Outlook: The company is extremely positive about the future for commercialising blockchain technologies and developing a strong growth strategy. With a significantly strengthened balance sheet and appointment of an experienced legal and corporate governance, the company seems to have a stable foundation for executing its growth strategy.