Prospa Group– An Emerging Fintech Player; A look At Peers

Prospa Group Limited (ASX: PGL) is a fintech company providing services for the small business economy in Australia and New Zealand through cloud-based, data-rich and API-enabled technologies. The company started trading on ASX from 11 June 2019.

Prospa Group has emerged as Australia’s number 1 online lender to small businesses. With an employee strength of 230 staff and a net loan book of over $300 million, it provides readily available services to its customers in the form of online business loans.

Purpose behind IPO: One major purpose underlying Prospa’s IPO was to improve and grow its loan offerings for small businesses. The funds raised will help the company invest in technology development and talent for developing its operating leverage and other operational efficiencies. There will be an increase in the addressable market through product development. The IPO also provided the company with access to listed capital markets for future growth.

Insights into the Business model: The company has attracted the attention of small businesses with the ease of accessibility to loans in comparison to traditional banks which do not offer loans without requisite documentation or security. It assesses the credit risk of businesses using technology before providing finance. The company provides a seamless customer experience with its lending process and offers personalised support to small businesses through sales and customer success teams. It provides credit decisions on most loans on the very same day as against the traditional lenders which take weeks or even months to process.

Competition: The company competes with banks, non-bank lenders and online lenders or fintech. An amalgamation of the above factors puts Prospa in a good position in comparison to its competitors which have not been able to adequately serve small businesses. The small business segment is a major contributor to the economy. Australia has 2.3 million small businesses that employ 44% of the private sector workforce and contributes 35% of the GDP. These businesses have been underserved by traditional banks which have a rigid framework that does not suit the requirements of the segment. Prospa’s strength w.r.t technology, funding and distribution provide it with significant operating scale and market advantages as against its competitors.

Now, let us have a look at few competitors to gain an understanding on their performance, which is as follows:

For the six months ended 31 March 2019, the bank reported a net profit after tax amounting to NZ$ 929 million, down 4% on the prior corresponding period. Revenue for the period went up by 8% on pcp. Cash Profit for the period was reported at NZ$ 1,114 million, up 18% on pcp. 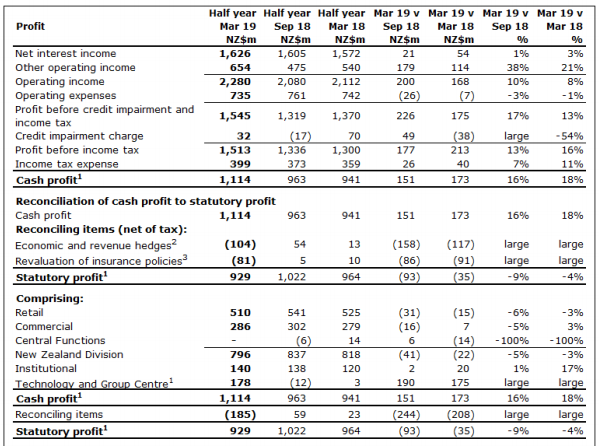 Commonwealth Bank of Australia (ASX: CBA) provides a wide range of financial services including funds management, life insurance, general insurance etc. On 17 June 2019, the bank notified to the exchange that it had ceased to be a substantial shareholder of ARB Corporation Limited and The Star Entertainment Group Limited.

For the quarter ended 31 March 2019, the bank reported sustained volume growth as against the previous quarter. The period was also characterised with a strengthened balance sheet. Profit during the period was lower due to pre-tax additional remediation of $714 million. Net interest income also declined at a rate of 3% on the back of the impact of two fewer days in the quarter.

National Australia Bank Limited (ASX: NAB) provides banking services, credit and access card facilities, leasing, housing finance etc. On 14 June 2019, the bank made an announcement on the change in percentage of voting shares particulars of which are as below: 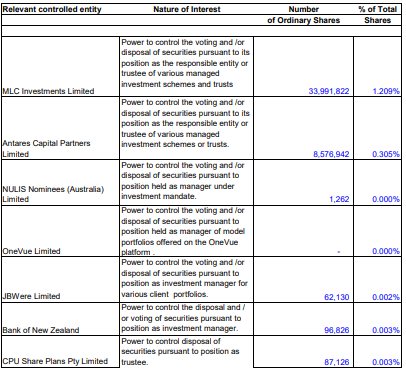 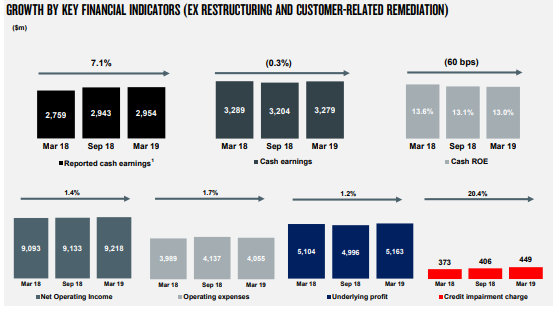 For the six months period, ending 31 March 2019, the bank reported a net profit of $3,173 million, down 24% on 1H18. NPAT also reduced by $753 million. Net interest income decreased by $15 million against 1H18. The period saw an increase in operating expenses by $436 million as compared to 1H18 due to costs of customer refunds, restructuring of Wealth business and other miscellaneous costs.

In March 2019, the bank announced the movement of wealth businesses into the Consumer and the Business divisions.