Do you know that Lithium, one of the simplest, smallest and oldest elements, is never found alone? It is found in traces in nearly all igneous rocks and in several mineral springs and needs to be isolated from other minerals. Moreover, the soft drink-7 Up, which was for a short period of time known as “Bib-Label Lithiated Lemon-Lime Soda” in the 1930s, had a key ingredient- lithium citrate, as a mood-stabilising drug. The natural element has also been used to cure mental illnesses for over a century and is presently the buzz word while discussing the electronic- vehicle revolution.

A simple yet diverse element, let us understand Lithium and its uses before we look into the performance of two Lithium stocks, trading on the Australian Securities Exchange:

A soft, off-white alkali metal, Lithium is a chemical element, which under standard conditions is regarded to be the lightest metal. It is highly reactive and flammable, and its compounds have numerous industrial applications. The density of lithium is the least amongst metals and is believed to be half of the density of water. The word Lithium is derived from “lithos”, which means stone in Greek.

Where is Lithium found?

The magic element occurs as compounds and it needs to be isolated from the pegmatitic minerals, where it is majorly found. The “Lithium Triangle” comprises of Chile, Bolivia and Argentina, and is believed to contain more than 75 per cent of lithium reserves of the globe. The next country in the list- Australia, is amongst the top three countries of the globe that produces lithium, sharing the spot with Chile and Argentina. Australia is also the present top supplier of Lithium, with investors eyeing its lithium markets closely. 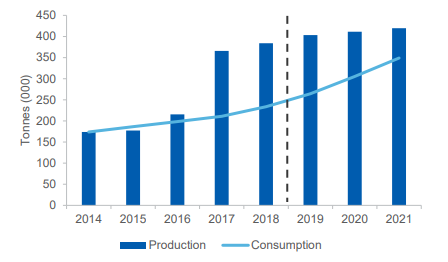 Lithium production and consumption over the years (Source: DIIS)

What are the uses of Lithium?

Lithium can be regarded both as a medical element and a chemical element. Lithium has been a key curer for mental illnesses and lithium carbonate is used in drugs to treat manic depression. Besides this, the following are a few other uses of lithium: 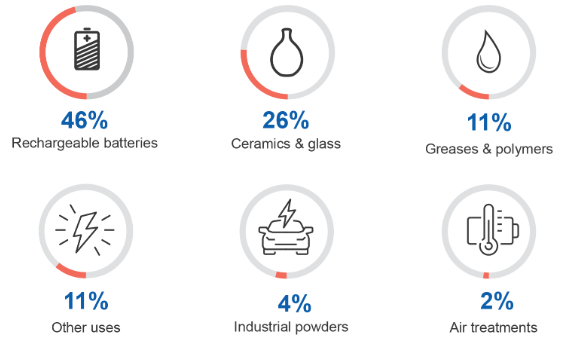 What is the current lithium situation in Australia?

According to the Australian Government’s Department of Industry, Innovation and Science, in 2017, the lithium market was valued at an approximation of $1.4 billion, with the Australian export revenue being around USD550 million. With the production on a rise ever since 2000, Australia kept its momentum paced up to be tagged as the world’s largest lithium producer. It is anticipated that by 2020, 80 per cent of the global lithium supply count would be in Australia’s kitty. The annual economic valuation in Australia is close to A$213 billion.

In the light of this expectation, the lithium companies which are operational in the country are involved in the downstream processing of lithium, especially the lithium hydroxide, which is believed to bear a worth of over 20 times when compared to the unprocessed concentrate. 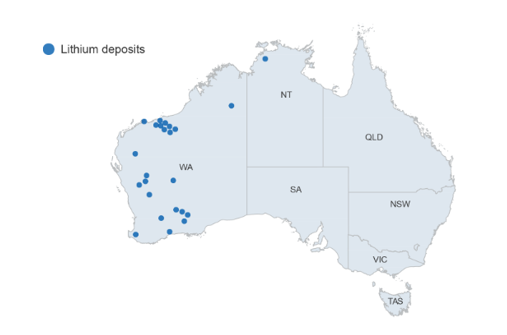 The Australian market dominated the Lithium space in 2018, with charged up productions which began in the lucrative Pilbara region by Altura Mining’sPilgangoora mine and Alliance Mineral Assets’ Bald Hill. Exports are anticipated to grow strongly over the outlook period, which is projected at $1.4 billion by 2020–2021. 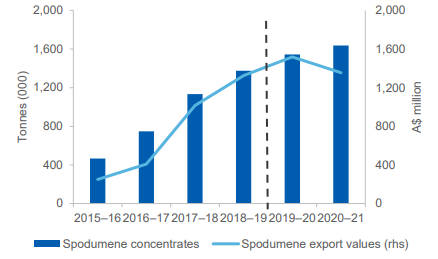 Let us now look at the stock performances of two lithium stocks, trading on the ASX:

Company Profile: A lithium explorer and developer, KDR acquired the historic Mt Holland goldfield in December 2015 and identified its lithium potential along with the Earl Grey hard-rock lithium deposit in 2016. SQM, a Chilean chemical specialist and the world’s biggest lithium producer, is in a JV with KDR in the Mt Holland deposit, since 2017.

June Quarterly Report: On 11 July 2019, the company announced in its quarterly activities result ending 30 June 2019, that it had signed a Scheme Implementation Deed with Wesfarmers Limited (ASX: WES), wherein the latter would acquire 100% of the shares in Kidman, each share priced at $1.90. The Scheme Booklet will be sent to Kidman shareholders in early August, with voting to be held in September 2019.

The Mt Holland Lithium Project continues to progress, and Covalent Lithium, the JV where KDR has 50 per cent interest, would report the IDFS for review in July end. It would be completed by 2019 and the final investment decision is anticipated to be taken in Q1 2020.

Recent Cash Flow Statement: Post the Activities report, the company released its Cash Flow statement for the Quarter ending 30 June 2019, with the below highlights:

Company Profile: ORE is a mineral exploration and production company focusing on developing Lithium/Potash resources in Argentina. ORE has a portfolio of lithium and boron assets to name a few. The company is operating the world’s first commercial, brine-based lithium operation, in partnership with TTC and JEMSE. The company is regarded as one of the largest and lowest cost lithium chemicals producers.

On 28 June 2019, the company notified that it has changed its principal place of address to Riparian Plaza in Brisbane, Queensland.

Investor Presentation: On 2 May 2019, ORE presented at the Macquarie Australia Conference and in the related presentation, mentioned that it had hit record production in the March 2019 quarter, with Production of 3,075 tonnes, up by 10 per cent on pcp. The revenue for the quarter stood at USD33.4 million on sales of 3,530 tonnes. The corporate cash balance at 31 March 2019 was noted at USD265.7 million, and the Group net cash was worth USD192.9 million.

The company had repaid USD82 million principal of the Project Debt at the Olaroz Project Facility, with the project balance now at USD110 million. 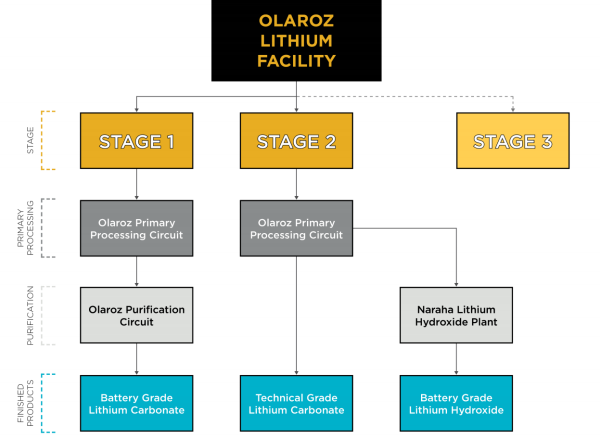 The company stated that with the weak domestic prices in China, the Chinese exports had surged, which worked in favour of the company. Besides this, the Naraha Lithium Hydroxide Plant was progressing along with the Cauchari joint venture, where the company holds ~33.5 per cent of AAL issued shares, and 25 per cent directly in the JV.