A Quick Look At Energy And Mineral Sector Outlook

The crude oil prices are tumbling in the international market over the global economic concerns, which has put weight on oil demand in the international market. Further, the current trade war between the US and China is also putting pressure on crude oil prices. The last few years have particularly been challenging for oil and gas companies worldwide, and many organisations have struggled to manage these volatile times. Countries like Saudi Arabia have reduced their reliance on crude oil for power generation; instead, it is using petroleum products and natural gas for power generation.

Coming to the mineral industry, the demand for battery minerals, especially lithium, has increased significantly in recent years. A significant driver of lithium consumption is the worldwide adoption of electric vehicles (EVs) encouraged by government incentives and infrastructure, falling costs of battery packs, improved performance of rechargeable batteries and a greater range of EV models to suit end-consumer needs. As per Orocobre Limited’s Sustainability report, the EV penetration was approaching 1% worldwide in 2016, while in certain countries in Europe, the penetration is as high as 25% and the general consensus suggests that global EV penetration will be approximately 4.5% by 2020. Due to the rise in the demand for Lithium, investors are keeping a close eye on lithium stock trading on the stock exchange (3 Lithium Stocks – PNN, LIT, CXO).

Many energy companies have expanded their operations to enter into the battery mineral space so that they could capitalise on the increasing demand for battery minerals.

Recently, the gold prices have also increased in the international market driven by the dispute of the United States with Mexico and China. It is expected that the emerging economies in South and South East Asia will drive demand for industrial metals, energy and fertilisers.

As per Rio Tinto’s 2018 Annual Report, the global iron ore industry is shifting from volume growth to focus on quality, and it is expected that the automotive industry will increase demand for primary aluminium, particularly in North America and China, with demand from construction and packaging remained firm.

Now let us take a quick look at the recent updates of the two companies, which are operating in Energy or Mineral space.

NRW Holdings Limited (ASX: NWH) has been providing drill and blast and mining services “contract mining” to Gascoyne Resources Limited (ASX: GCY). Today (i.e., 4th June 2019), NWH noted the appointment of FTI Consulting as Voluntary Administrators to Gascoyne Resources. The administrators are planning to continue operating Gascoyne on a ‘business as usual’ basis. In addition, the company is also exploring its recapitalisation options.

Recently, in response to a media speculation, NRW Holdings confirmed that it is currently not pursuing any acquisitions to the value speculated in the media regarding the acquisition of BGC Contracting.

NRW Holdings’ wholly-owned subsidiary, RCR Mining Technologies (RCRMT) was recently awarded a significant OEM equipment package for the Rio Tinto Iron Ore Koodaideri project. This new order is for the supply of 3 large Apron Feeders, 11 Slide Gates and 2 Belt Feeders, to a combined value in excess of $18 million. In May 2019, the company awarded the Koodaideri Rail Formation South Earthworks contract by Rio Tinto, which includes the construction of approximately 73 kms of new rail embankment.

Buru Energy Limited (ASX: BRU) is an Australia registered company, involved in the oil and gas exploration and production. Today, on 4th June 2019, the company updated the market about its weekly drilling report from Ungani 6H well.

BRU reported that the well has been drilled further 171mm (63/4 inch) hole to a measured depth of 2,013 metres, with a vertical depth of 1,961 metres. The operations during the period have been impacted by various factors, which consists of a lost circulation zone, plugged downhole drill string and motor. In addition, hydraulic system maintenance has also been a significant factor impacting the operations. BRU communicated that these issues have now been addressed, with senior operations personnel on site and the operations now likely to be normalised.

The delays encountered till date will result in additional costs above the budgeted for the Ungani 6H well. However, all costs remained inside the allowed limit for contingencies for the overall program. Moreover, since its previous weekly drilling report dated 28th May 2019, the Ungani 6H well drilled ahead in 171 mm (6 3/4 inch) hole to a measured depth of 1,918 metres with a vertical depth of 1,894 metres. 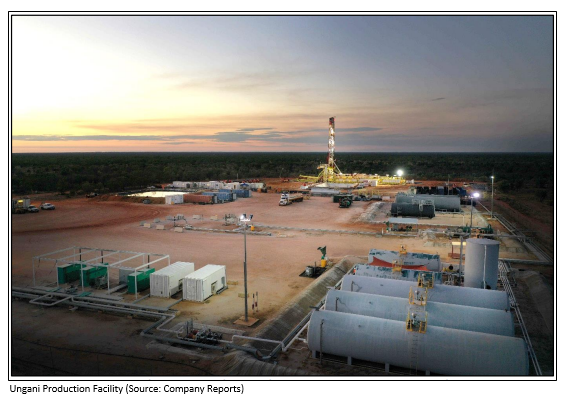 BRU’s next step is to drill further depth of around 2,340 metres in 171 millimeter hole with 140 millimeter casing to be run at section depth after the Ungani Dolomite reservoir is identified.

Looking at the financials of the company. BRU’s cash position stood at $61.5 million as on 31st March 2019, whereas it reported the debt of $4.5 million for the same period.

BRU provides multiple whys and wherefores for investors to invest in the company, some of which are: It is a profitable, a low-cost oil producer with control over its activity, it has near term drilling activity on large prospects along with large activities, and it has a strong balance sheet and positive cash flow from production to sustain its internal funding.