Lithium is among the top metals currently on the investorsâ radar amid its predicted demand surge in the coming years. Moreover, from industry experts to the lithium downstream industry, all are adopting a bullish stance over lithium in the long run.

Many countries such as Australia and Chile are eyeing lithium as a ticket to boost their slow domestic economic conditions. The top lithium supplier, Australia, is also watching the lithium market closely, as the nation intends to maintain its leading position as the worldâs largest supplier of primary lithium.

Lithium is majorly used in the sector of rechargeable batteries, an industry which is anticipated to shine high, once the global economies adopt the 100 per cent EV trend in the coming years. The demand for lithium chemicals is also estimated to increase over the long run, and many Australian miners are engaging themselves in the downstream processing of lithium. 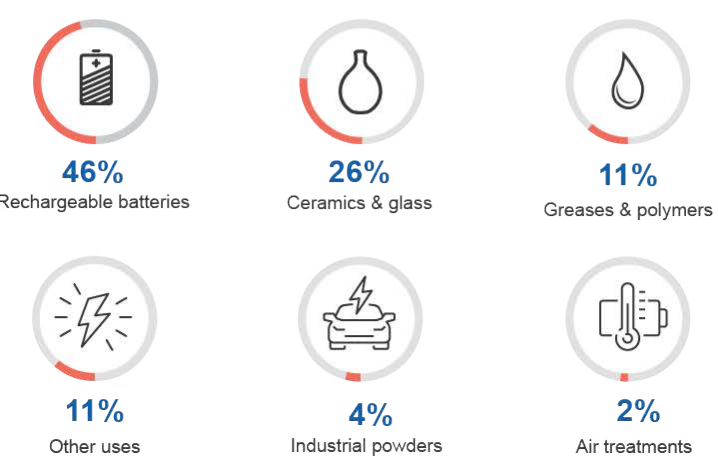 Lithium Hydroxide and Lithium Carbonate prices are trending down since their peak in late 2018 amid the fall in China, which dragged down the prices of lithium-based chemicals in the international market amidst oversupply conditions.

The oversupply condition in the market is due to the fact that lithium miners are attempting to position output to meet the expected rapid rise in the future demand.

The Australian Department of Industry, Innovation and Science (DIIS) projects that lithium hydroxide prices would fall by nearly 15 per cent in 2019 amid growing inventory and oversupplied market. The DIIS also anticipates that the prices would start turning around after 2020; however, the prices of spodumene ore would likely to be soft for some time, which in turn, would keep lithium prices in a check over the short-term. 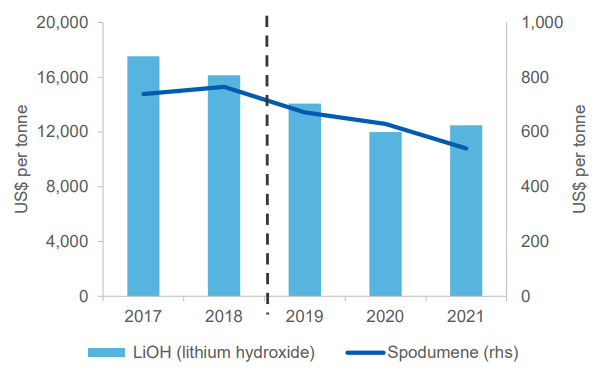 On the consumption side, electric vehicle sales rose over 50 per cent in March 2019 as compared to the same period in 2018 and the rate of growth is further accelerating. The DIIS predicts that the demand growth would surpass the supply by around 2023. 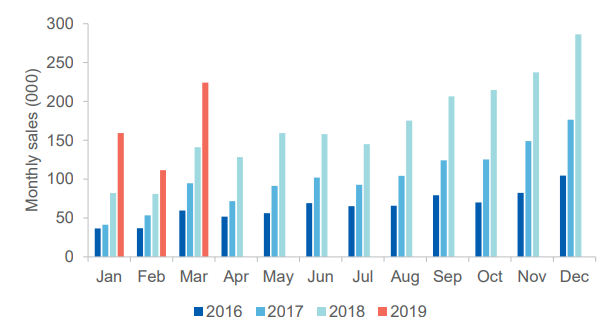 The overall global lithium imports and consumption witnessed a spike in the first quarter of the current year, which was similar to the consumption behaviour at the beginning of the year 2018. DIIS predicts that if the previous year trend continues, it may add to the price deflation in the mid-year.

Japan is the top importer of refined lithium, as the countryâs emerging role as a producer of electric vehicle technology is fanning the lithium demand in the domestic market. Other nations such as Korea are also inching up refined lithium imports. 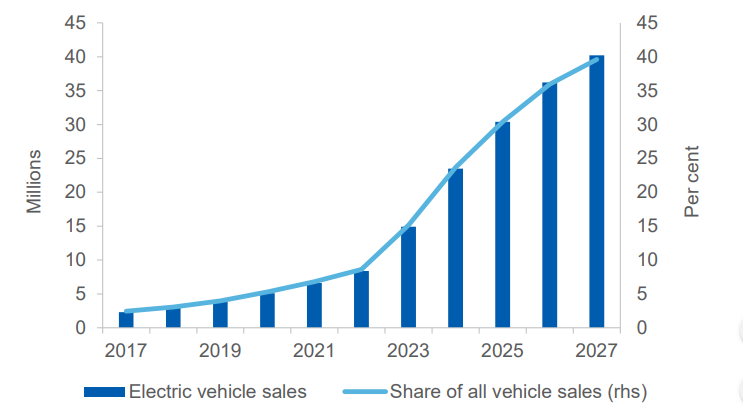 Many global economies, such as in the European region, are targeting lithium production and downstream processing to avoid supply bottlenecks in the lithium market over the coming years. The production of lithium hydroxide source - hard rock is expected to dominate the global growth from 384,000 tonnes in 2018 to 420,000 tonnes by 2021.

The DIIS expects that over the coming years, lithium recycling is likely to emerge, which in turn, could substitute the mined production. Many players such as Volkswagen are currently working on the development of lithium recycling methods. 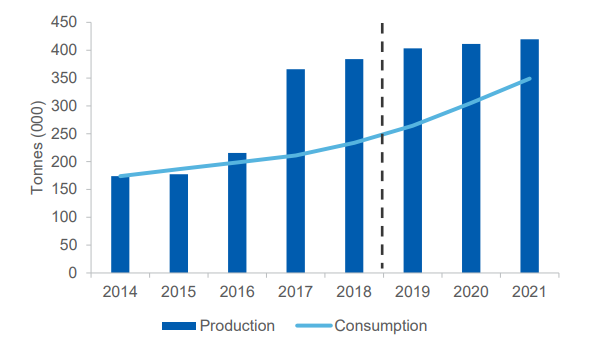 Australia stood as the worldâs largest supplier of lithium in 2018, and the country marked the start of several lithium production sites in Western Australia during the year. In the region, production commenced at the Pilgangoora mine in the Pilbara region, with Pilbara Minerals Limited (ASX: PLS) and Altura Mining Limited (ASX: AJM) holding adjoining tenements at the mine.

Despite the damage caused by the Tropical Cyclone Veronica in the Pilbara region, Australian lithium supply chain dominated the worldâs supply. Apart from the production in Pilbara, Bald Hill production operation of Alliance Mineral Assets Limited (ASX: A40) recorded a 20 per cent quarter-on-quarter surge in the March 2019 quarter. 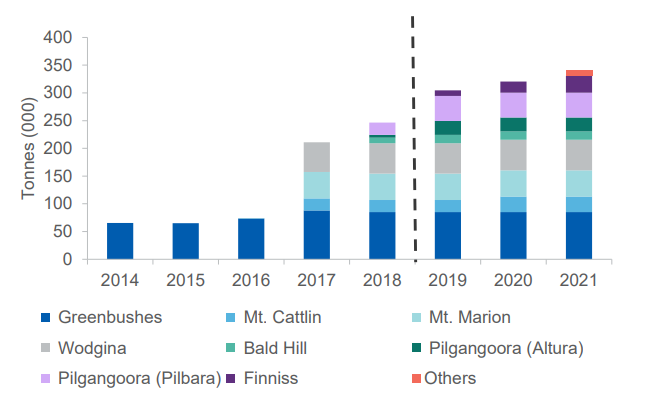 The DIIS forecasts that the lithium export volume by 2020-21 would reach $ 1.4 billion. 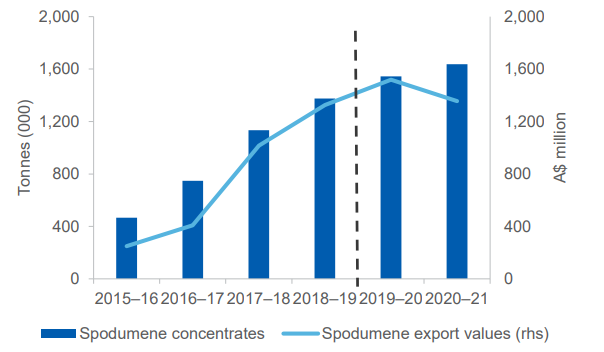 The overall lithium global outlook and Australian inputs are summarized in the picture shown below. 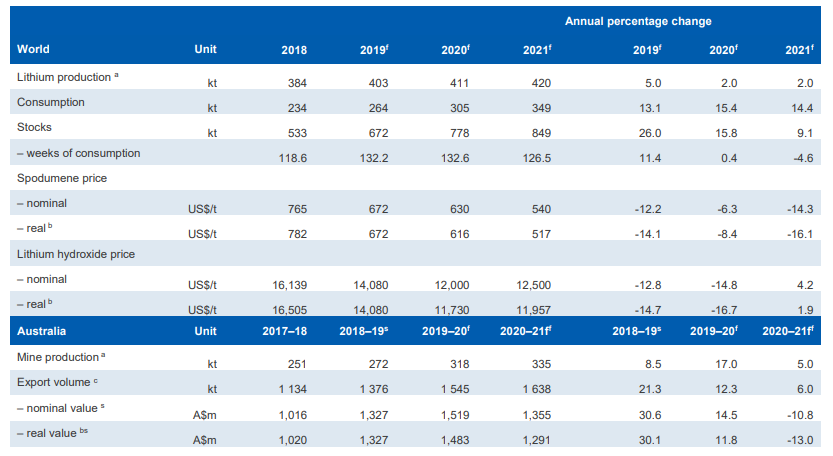 Post understanding the global and Australian outlook on lithium, let us now have a look over the ASX-listed lithium players.

As mentioned above, AJM hosts the Pilgangoora mine in the Pilbara Region, which is a lithium-based mine. The production from the mine is estimated to grow over time, and the improvement in the global lithium market over the coming years could be advantageous for the company.

To further support the Pilgangoora mine, AJM secured an offtake agreement with a Chinese counterpart.

AJM executed a Binding Offtake Agreement with Shandong Ruifu, a Chinese lithium carbonate and lithium hydroxide producer, for 35,000 tonnes per annum of 6 per cent grade spodumene concentrate until June 2024.

The company schedules a shipment of nearly 8,000 tonnes of spodumene concentrate for later in July 2019, and the price would follow the lithium oxide content formula, which would incorporate published reference pricing weighted for both lithium carbonate and lithium hydroxide.

Meanwhile, the existing offtake agreement for the remaining 50,000 tonnes per annum of spodumene concentrate with another offtake partner of the company, i.e. Shaanxi J&R Optimum Energy (JRO), was also terminated.

Post the negotiation of the offtake, the status of the companyâs lithium offtake commitments would be as shown in the image below:

AJM previously announced that the Ningbo Shanshan acquired a substantial stake in the company.

Another spodumene producing prospect-Finniss, which is hosted by CXO, is anticipated to mark an increased production in the coming years.

As per the company, exploration work with Reverse Circulation and Diamond drilling rigs has started, and the company plans to improve the production profile of the prospect further. CXO is also planning to extend the mine life at the Finniss Lithium Project.

Out of the 30 lithium-rich pegmatites, six now have a Mineral Resource or Exploration Target. The exploration work conducted by the company, including soil geochemistry, mapping and shallow scout drilling identified 50 more targets for the testing. 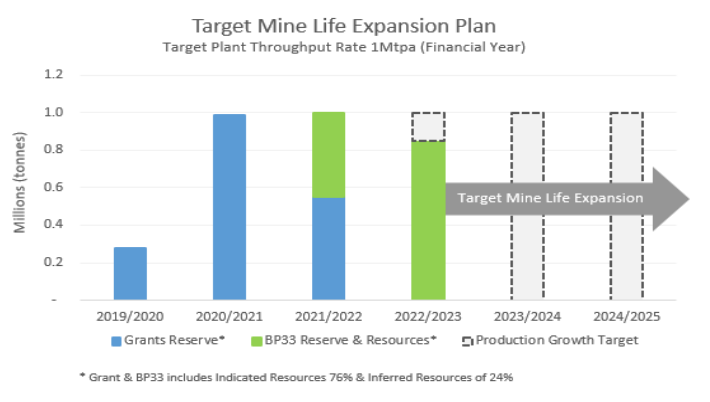 The Australian Securities Exchange-listed lithium player made an announcement on 9th July 2019, in which LI3 mentioned that the company received three new lithium exploration licences in northern Mozambique. The company secured two licences previously in March 2019. It is the only ASX listed company that entered Mozambique for hard rock lithium.

The Alto Ligonha Pegmatite Province hosts massive pegmatites concentrates and the total licences at the tenement along with the artisanal mining style are as given in the figure below:

Out of all five exploration licences, the 9166L licence is strategically significant to the company, as there is no recorded mining at the tenement.