The connection between oil prices movement and economic performance is too profound. According to the IMF, a deeper global recession is expected with output to shrink by 4.9% in 2020 than the 3% contraction predicted in April. As new cases are emerging around the world and relaxed lockdown measure getting stringent, the economic recovery is again stalling with indices worldwide going through roller coaster movement.

On 1 July, The United States reported 52,789 new cases, and on 2 July US recorded 55,220 new coronavirus case. The resurgence of cases has also affected oil prices. The oil prices which was recovering since the March Low again took a dip with the month of June witnessing WTI shuttle in the range of US$36 to US$40 per barrel. Since 1 July, WTI has once more taken a recovery curve, thanks to the falling U.S. unemployment rate which hit 11.1% in June. Brent Crude had been declining since 1 July with an increasing number of cases in the US. Such to and fro movement of oil prices are influencing the market indices, including S&P ASX 200. The pandemic driven economic turmoil has forced ASX oil stocks to plunge during the March bear market. However, share prices of oil giants such as Woodside Petroleum Limited (ASX: WPL), Oil Search Limited (ASX: OSH), and Santos Ltd (ASX:STO) has recovered since then.

Interesting Read: What Are Chartists Pointing Out in ASX-listed Oil & Gas Stocks- WPL, OSH, and STO

On that backdrop, let’s understand the current prospects of Australia and where the future leads.

In Australia, domestic production of oil has been continuously declining, making Australia more dependent on imported oil. To increase domestic production, recently, Keith Pitt, Minister for Resources, Water and Northern Australia pressed for more investment in the Australian oil and gas sector. The call for investment is aligned with the government’s priority for strengthening the energy sector and accordingly meeting economic goals, domestic energy supply and reducing greenhouse emissions.

As per the Australian Bureau of Statistics, Australia is already incurring exploration expenditures in oil.

The fall in the expenditure reflects the weak market conditions leading to a sharp fall in oil prices amid the Covid-19 impacted declined oil demand and the March bear market. Falling demand led to production cut by OPEC+ by ~10 million barrels per day in April 2020. To further expedite the market rebalancing, OPEC+ extended their output cut off to almost 10 mb/d through July. 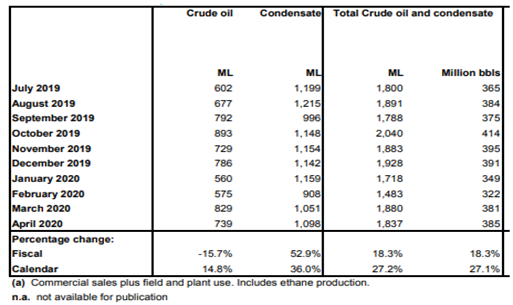 Oil prospects that have garnered attention include the Dorado 2C contingent oil resource and the Greater Enfield oil project.

According to the IEA Oil Market Report, global oil output is expected for a 1.7 mb/d recovery in 2021 to be backed by easing OPEC+ cuts with Norway, Brazil, Guyana, and Libya regaining economic strength.

The first half of 2020 has ended in a more positive note than expected as May witnessed. Crude prices hit highest in three months backed by recovering oil demand with a decline in global supply. In early June, both WTI and Brent traded close to US$40/bbl for several days before easing back slightly. The recovering oil demand was backed by reviving of key openings globally with US and China resuming manufacturing activities.

According to the OPEC report, in the second half of 2020 -World oil demand is estimated to decline by 6.4 mb per day. If OPEC+ continues to rebalance the market with production cuts coupled with G20 initiatives in the line leading to more recovery in oil demand, the 2020 oil market will be able to end the year on a more stable footing. However, the resurgence of cases around the world and easing economic shut-ins becoming stringent again, the future remains uncertain.

Also Read: How is Crude Oil Poised for the Reminder of the year 2020?