What Are Chartists Pointing Out in ASX-listed Oil & Gas Stocks- WPL, OSH, and STO

ASX-listed oil and gas stocks are now continuing the downside momentum after witnessing large gap downs on the exchange with many plunging due to the fall in global oil prices. Brent crude oil futures which recently climbed to trade at USD 43.93 per barrel (intraday high on 23 June 2020) had slipped to a low of USD 39.48 per barrel (intraday low on 25 June 2020), which marked a fall of ~ 10.12 per cent in just two trading sessions.

The fall in the oil market is largely due to the supply glut which despite a record production cut by OPEC and allies is haunting the global oil price in the wake of weak demand and changing market sentiments in terms of risk.

The shift in the market risk appetite is greasing the wheel for gold, which is once again shining brighter on the global front; however, risky assets such as crude oil are finding it difficult to gear-up in the status quo, kicking a downside momentum in ASX-listed oil stocks. 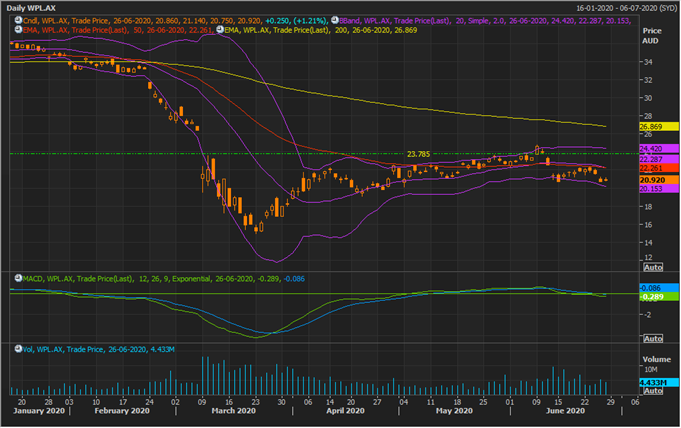 On following the daily chart, it could be seen that after witnessing a large gap down during in the recent trading session, the stock has attempted to retest the mean of the 20-simple Bollinger band; however, failed to break above the same and is currently testing the -1 Standard Deviation of the Bollinger band.

Furthermore, the mean value of the Bollinger band is a decisive resistance for the stock as it is overlapping with the 50-day exponential moving average. The stock is currently trading below the 200-day EMA, reflecting that the primary trend is a downtrend.

The second and major resistance for the stock is at $23.785 or the horizontal line, above which, the stock has previously failed to sustain. The 12,24,9 MACD indicator is showing a negative cross, and it should be noticed that every filled candle is followed by large volumes, confirming that prevailing sentiments are bearish in nature. 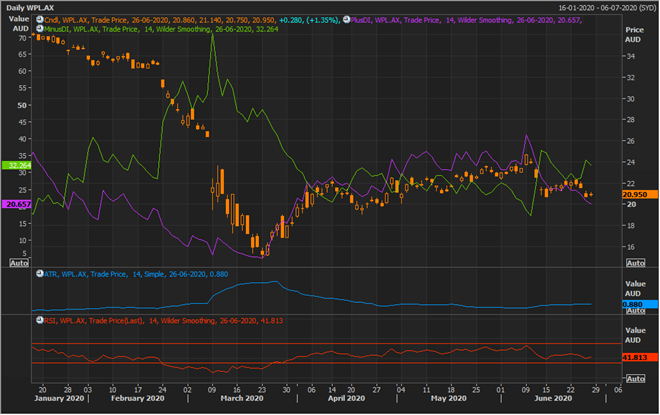 On further applying the combination of plus and minus Directional Indicator, it could be seen that they are showing a negative cross with plus DI shifting below minus DI with a large spread, which coupled with a rising Average True Range suggest that bears are dominating the stock price behaviour. The 14-day RSI is below the mean value, asserting the above-stated facts. 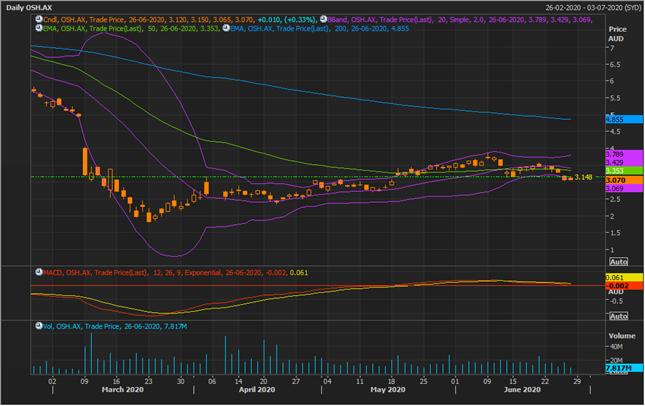 On following the daily chart, it could be seen that OSH is following the same downside trajectory like WPL with stock trading below its 200-day EMA. Furthermore, the stock is currently hovering around the crucial support level of $3.148 or the horizontal line, which is below the mean value of 20-day simple Bollinger band and is currently overlapping with -1 SD of the Bollinger band.

The current and immediate resistance for the stock is at the mean value of the Bollinger, which is pivotal in nature as it is overlapping with the 50-day EMA. The present level is crucial as a further break below with strong confirmation (which varies as per trader to trader) could seed bearish sentiments ahead.

The 12,24,9 MACD is showing a negative cross with a decent spread, which, coupled with the current price behaviour, is suggesting that prevailing sentiments are bearish. 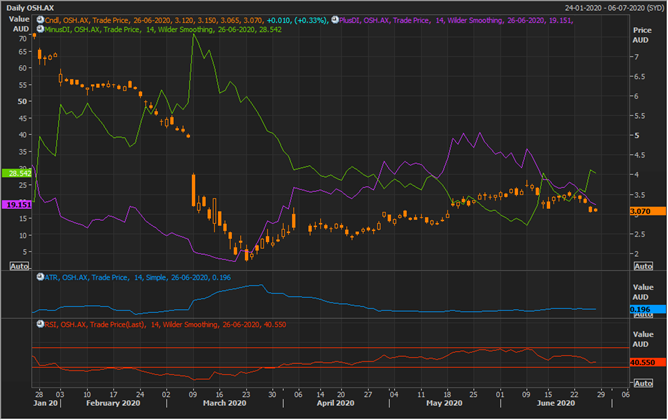 On applying the pair of plus and minus DI, it could be seen that they are giving a negative cross, which coupled with slightly rising ATR is reflecting that bears are currently dominating the front. The 14-day RSI is also below the mean value, asserting the above-stated facts. 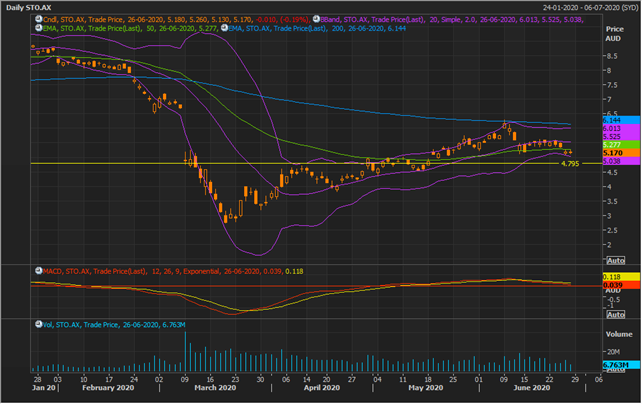 STO is currently testing the -1 SD of the 20-day Bollinger band and is presently trading above its support level of $4.795 or the horizontal line. Post witnessing the gap down, the stock took the support of the mean of the Bollinger band but has now retraced downside to test the -1 SD, which is just slightly above the support line.

The 12,24,9 MACD indicator is giving a negative signal; however, volumes are equivalent in both hollow (bullish) and filled candles (bearish), suggesting that the stock has entered a tug of war between bulls and bears around the support, and price action above the same or failure to do so would dictate the future movement ahead. 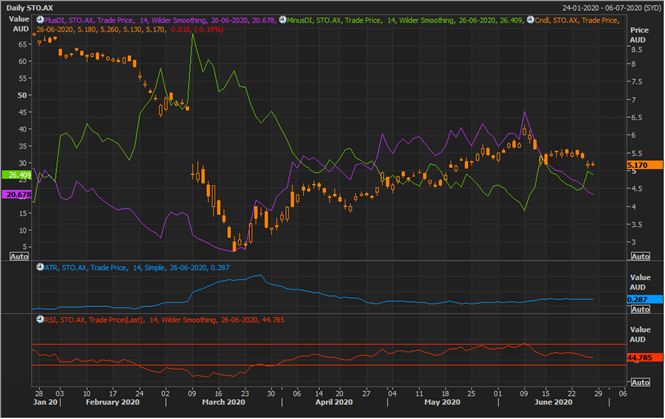 The plus and minus DIs are showing a negative signal; however, the cross is below the price, suggesting that the market is currently indecisive. The ATR is rising as should be expected, as the market would reach consensus and provide direction to the stock ahead. The RSI is also slightly improving and is below the mean value.

After observing the above-stated facts, it could be asserted that the stock is currently is trading without a market consensus and is in a tug of war between bulls and bears. The break of support or sustenance above the same would now decide the future direction.