Later, with the improvement in the situation, the iron ore supplies were improved meeting the global demand. With the slump in the infrastructure spending and iron ore consumption in China, the demand for Iron ore reduced which resulted in increase of iron ore inventories worldwide. Since then, the iron ore price has corrected by ~25.00% and is expected to show further weakness in the coming times. Amid escalating trade-tensions, Brexit concerns, economic growth’s slowdown in China, World Bank has now reduced its global growth forecast to 2.6% in 2019, which is expected to continue till 2020. However, from 2021, with modest recovery in the emerging economies, the iron-ore growth would gradually rise to 2.8%.

In 2019 and 2020, Iron Ore prices are expected to decline further on account of huge supply and demand misbalances.

Perth based, Fortescue Metals Group Ltd (ASX: FMG) owns and operates integrated operations in the three mine sites in the Pilbara and the five berth Herb Elliot Port in Port Hedland.

The company, recently on 23 August 2019, provided statement related to Mineral Resources on its Greater Western Hub Development properties, as on 30 June this year. The Greater Western Hub Inferred Mineral Resource has increased by 405 million tonnes (mt) to 2,047 million tonnes, which comprise of updates to the Flying Fish, Cobra and Elevation deposits. The Pilbara Other Inferred Mineral Resources comprise of 384 million tonnes with the addition of the Fig Tree and Wonmunna deposits. The additional tonnes include high grade bedded iron deposits (BID) in the Brockman and Marra Mamba Iron Formations, along with channel iron deposits (CID). The Queens Extension deposit earlier included within the Greater Solomon Hub has been transferred to operating properties.

Steel building product company, BlueScope Steel Limited (ASX: BSL) recently published its FY19 report for the full year for the period closed on 30 June 2019, wherein it highlighted that its sales revenue from continuing operations increased by 9% from $11,497.8 Mn in FY18 to $12,532.8 Mn in FY19, majorly due to higher steel prices across all segments combined with favourable translation impacts from a weaker Australian dollar exchange rate. The underlying EBIT increased by 6% to $1,348.3 Mn, due to higher spreads between steel prices and the raw material input costs.

Mount Gibson Iron Limited (ASX: MGX) is involved in the mining of hematite iron ore in the Iron Hill deposit at the Extension Hill mine site in the Mid-West region of Western Australia, and haulage of the ore via road and rail for export from the Geraldton Port.

The company recently published its FY19 full year report, for the period closed on 30 June 2019, where it highlighted that its net profit after tax for the period was recorded at $133.4 million, on total iron ore sales of 3.2 million wet metric tonnes (Mwmt). The reported profit before tax (including discontinued operations at Tallering Peak) was at $70.5 million was well in excess of the result of $34.8 million reported in 2017/18 excluding the Koolan Island business interruption insurance settlement. This significant improvement reflected a 41% increase in average realised prices and the commencement of high-grade sales from Koolan Island in late April 2019.

The Group’s average cost of sales increased from $44/wmt FOB in 2017/18 to $50/wmt FOB in 2018/19. This reflected increased royalties of around $2/wmt arising from higher realised prices, the transitional impacts of reduced production and wind-down costs in the Mid-West operation prior to the commencement of the low grade sales program later in the year, and operating costs associated with the commencement of high grade sales at Koolan Island. Unit costs at Koolan Island are expected to decrease with the ramp-up of production volumes. 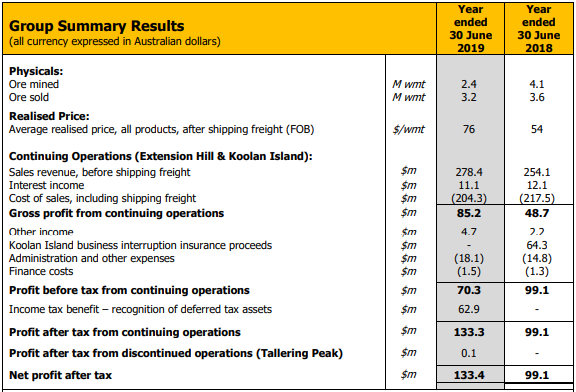