Graphite is gaining traction amid the expected battery boom in the coming years, which is also pulling the lithium market. The demand for lithium-ion based batteries is forecasted to surge, as many industry players and industries are focusing on the lithium side of the battery. Moreover, many players are eyeing the graphite market.

Now, the question which might arise in the minds of the readers would be why graphite? The answer to this “Why” lies in the fundamental use of graphite in the anode formation of batteries.

While, industrial metals such as cobalt, lithium and nickel that are used as raw materials in the formation of cathodes catch the eye of global investors, the anode portion of the battery is getting comparatively less attraction amid abundant supply of graphite.

China and Supply Side:

China alone supplied 56 per cent of the global graphite raw material market in 2018, while Mozambique supplied 17 per cent of the same market, which in turn, makes both the countries a significant global supplier.

However, the other countries such as Brazil and India are also into the play, but their supply side is way too small as compared to China.

In the status quo, the increased stance of China to curb the environmental pollution in line with the Euro-6 emission standards could give graphite market a little edge. China has witnessed an array of mills suspension across different provinces in the wake of smog alerts, which in turn, makes China capable of cutting down any commodity production over the environmental concerns despite its economic impact.

The suspension or production cut policy of China to support the environment could be advantageous to other mammoth graphite countries such as Mozambique, where an ASX-listed miner- Syrah Resources Limited (ASX: SYR) hosts and operate its world-class Balama Graphite Operations.

The graphite operation of the company in the Cabo Delgado province of northern Mozambique hosts a substantial amount of resource, which in turn, makes the prospect a significant asset for the company.

The feasibility study conducted by the company in the year 2015 confirmed that the capital intensity of the prospect is low with low technical risk and attractive returns. The initial capital expenditure of the prospect stood at US$138 million, with a payback period of less than 2 years, post the commercial production, which in turn, marks a high internal rate of return.

The Net Present Value as per the feasibility study stood at US$1,125 (Post-tax) after assuming the weighted average basket graphite price of US$1,000 (FOB basis) and an average operating cost over the life of mine of US$286 (FOB basis).

The NPV estimate by the company of US$1,125 posts an internal rate of return of 71 per cent in less than 2 years.

The key operational metrics of the prospect are as: 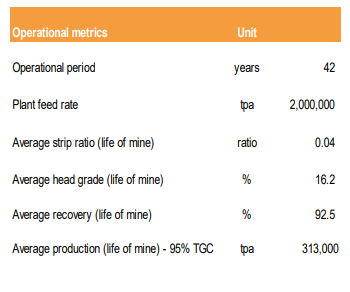 Post assessing the abundance of mineral reserves and ore resources, and after securing all the mandatory regulatory approvals, SYR produced the first natural coarse flake graphite in November 2017 and commenced sales from the prospect in January 2018.

As per the current mine plan, SYR kept the recovery rate at 88 per cent, and intends to progress it gradually towards its Feasibility Study recovery rate of 92.5 per cent.

The current mine plan of the company is as:

Apart from the primary graphite production, the company expanded its horizon in the anode construction as well. The company identified that the anode market could provide the shareholders of the company an additional value.

The downstream process of SYR is as: 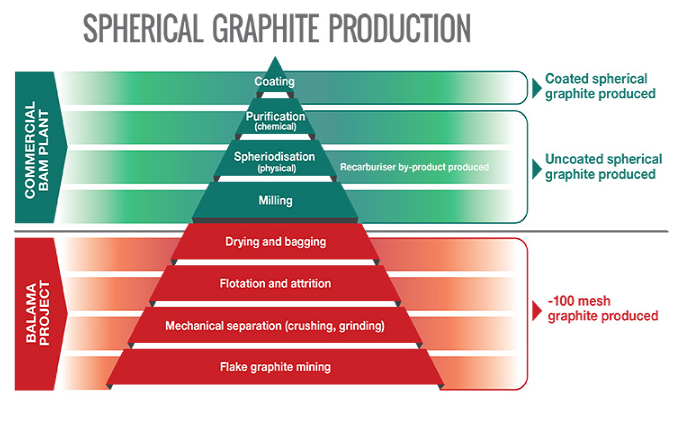 The unique crystal structure and low impurities of the mineralisation at the prospect allow MNS to produce premium quality of graphite, with purity level up to 99.6 per cent total graphite carbon (TGC). The high-quality products are highly sought-after in the international market as more and more economies are turning carbon resilient.

The production demonstrated strong financial metrics when assessed by the company through the Bankable Feasibility Study (BFS). The BFS projected a post-tax value of US$1.69 billion, which represented a Net Present Value (NPV) of 10 per cent post incorporating the pre-production capital of US$269 million. MNS recently completed a Feasibility Study at its Townsville Project.

The 10 per cent NPV projected an Internal Rate of Return of 98 per cent with a payback period projected within 14 months after the commercial production.

MNS projected the capital expenditure of US$502 per product tonne (FOB basis) over the first five years of the production.

As per the updated Mineral Resource from the company on 1st February 2016, the global mineral resource of the prospect stands at 174 million tonnes with an average grade of 5.4 per cent Graphite Carbon, and with that, the project represents one of the largest mineral resources of large flake graphite across the globe.

Within the prospect site, the Block F Mineral Resource stands at 59.5 million tonnes in the Measured category and 39.3 million tonnes of the block is in the Indicated Resource category.

The independent assessment conducted by Orelogy includes the resources from the F and FS blocks, and as per the company, the total Proven and Probable Ore Reserve stands at 76 million tonnes with an average grade of 4.8 per cent graphite carbon, which in turn, would account for 3.6 million tonnes of contained graphite.

Magnis also expended its business horizons to provide the shareholders with additional value. The company successfully produced a 99.99 per cent purity coated spherical graphite anode, which is in high demand amid improved conductivity and other extra features.

The graphite anode traditionally sees intensive chemical and thermal purification; however, the high-grade graphite and the crystalline structure allowed the company to ignore such purification techniques to produce a high-grade anode.

Such production could make the company an alternative and distinct supplier of a graphite anode, which in turn, could be advantageous.

In a nutshell, while the graphite market is set to leap, the primary graphite producers are trying to compete with China and are also diversifying the product portfolio to take advantage of the graphite anode market.