In the recent times, significant job creation along with an increase in the proportion of the adult population in work or actively looking for a job, has put a downward pressure on the unemployment rate. However, the impact of the above advancement has been limited due to simultaneous growth in population and rising participation, that has given an upward push to measures of unemployment. An increase in full-time jobs and steady unemployment also led to a rise in underemployment and underutilisation of resources.

As per data provided in few media reports, the list of top employers in Australia is mainly dominated by the Banking and Financial services sector. Other rank holders include companies from diversified sectors like construction, civil engineering, management consulting, e-commerce, retail etc. Let us now have a look at some of the recent updates from Australiaâs top employers.

WBC is awarded as No. 1 in the LinkedIn Top Companies List of 2019. This list compliments the 25 top companies nationwide âWhere Australia Wants to Work Now".

S&P Global Ratings Upgrade: As per a recent announcement, S&P upgraded Westpacâs stand-alone credit profile by one notch. The rating was revised from âa-â to âaâ. While, the senior debt rating of AA-/A-1+/stable remained the same, S&P rating on certain capital instruments issued by Westpac was increased by one notch. Rating for Basel III compliant Tier 2 instruments was revised from âBBBâ to âBBB+â. Rating for Basel III compliant Additional Tier 1 capital instruments was changed from âBB+â to âBBB-â.

Shareholding Update: As per another recent announcement, the companyâs voting power in Tower Limited increased from 6.49% to 8.13%.

Financial Highlights: During the year ended 30 September 2018, the companyâs net interest income increased by 6% in comparison to the prior corresponding period. Total net loans witnessed a rise of 4% or $24.8 billion as compared to 2017. Excluding the impact of foreign currency translation, total net loans increased at a rate of 3%. Net interest margin for the year went up by 7 basis points to 2.13%.

Australia and New Zealand Banking Group Limited is engaged in providing banking and financial services to its customers. Its declared as one of the best employers after Westpac in 2019. ANZ encourages employees to express their true self.

FY19 Full Year Result: During the year ended 30 September 2019, the Group reported a statutory net profit after tax amounting to NZ$1,825 million, representing a decline of 8% on the previous year. Cash NPAT for the year amounted to NZ$1,933 million, up 2% on prior year. The increase in cash NPAT is attributable to ANZ New Zealandâs 25% share in Paymark Limited and sales of insurance company OnePath Life (NZ) Limited. Revenue for the period including the impact of one-off items, increased by 3%. 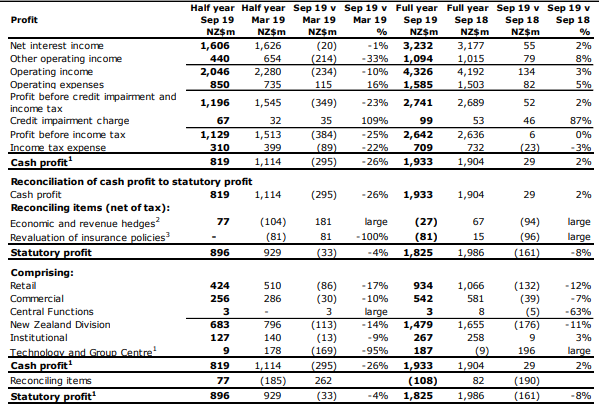 During the year, customer deposits and gross lending went up by 5% and 4%, respectively. Operating expenses during the year increased by 5% on a cash NPAT basis due to remediation and increased regulatory requirements.

On the macro front, interest rates dropped to the lowest levels on record due to strong competition in the home lending market combined with Official Cash Rate cuts. This provided a market entry to home buyers and enabled homeowners to pay off as much debt as possible.

Lendlease Group is primarily engaged in retail property management and asset management. The company recently announced that the 2019 AGM of shareholders and General Meeting of unit holders of Lendlease Trust, will be held on 20 November 2019. LLC has been awarded as the Platinum Employer, for the second year in a row by Australian Workplace Equality Index Awards, and LGBTI Employee Network of the Year (for having the best employee resource group for LGBTIQ).

Appointment of Director: The company recently provided an update regarding appointment of Baroness Margaret Ford OBE as an independent Non-Executive Director, effective 01 March 2020. She is currently serving as the Chairman on the Board of New River REIT Plc and has extensive experience in development and construction, and infrastructure financing.

CIMIC Group Limited is primarily engaged in construction, mining and mineral processing, public private partnerships, engineering and other services. CIM is again ranked seventh doe work in 2019 by Linkedin. The company is best known for attracting and keeping top talent.

Recent Contract: The company recently updated the exchange that one of its group company, CPB Contractors, will be delivering an upgrade to a northern section of Melbourneâs M80 Ring Road. The contract is expected to provide CPB Contrators with an approximate revenue of $331 million. The upgrade, which is funded by the Governments of Australian and Victorian, will reduce congestion and enhance safety for drivers at the M80 Ring Road. Construction under the above contract is expected to start in early 2020, with completion anticipated in early 2023.

Board Changes: In another recent announcement on 23 October 2019, the company updated that Trevor Gerber will step down from the position of independent director with effect from 31 December 2019.

Nine Months Financials: During the nine months ended 30 September 2019, the company generated revenue amounting to $10.7 billion. NPAT for the period amounted to $573 million, up 2% on YoY basis. The period was also marked by a strong operating cash flow of $811 million and net cash of $826 million. 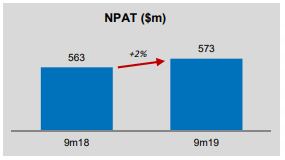 Full Year Guidance: NPAT for the year ending 31 December 2019 is expected to be in the range of $790 million - $840 million. The guidance is supported by a positive outlook across core markets, strengthening of the mining market, a strong PPP pipeline in Construction and Services, and a strong balance sheet enabling improved flexibility to pursue strategic growth initiatives and capital allocation opportunities.