Though the stocks of several companies are listed on the ASX, there are some well-known ‘W’ stocks that have been garnering investors’ attention for a long time. These stocks include Woolworths Group Limited (ASX: WOW), Wesfarmers Limited (ASX: WES), WiseTech Global Limited (ASX: WTC) and Westpac Banking Corporation (ASX: WBC).

Operating primarily in New Zealand and Australia, Woolworths Group Limited (ASX: WOW) had around 196,000 employees and 3,292 stores by the end of the financial year 2019. The Group is majorly engaged in the retail operations across New Zealand Food, Endeavour Drinks, Australian Food, Hotels and BIG W. For its primary trading divisions, the Group also has online operations.

Recently, the Group has extended its current investment in Marley Spoon AG (ASX: MMM), together with Union Square Ventures by $4 million each, for a total amount of ~$8 million.

Marley Spoon notified that Union Square Ventures has extended its investment via its two affiliated funds, initially by means of a commercial loan facility, that bears interest at a fixed rate of 12 per cent p.a. and has a term of three years.

Woolworths Group has also approved a senior secured commercial loan agreement, which bears interest at a fixed rate of 7 per cent p.a. and has a term of six months.

The Group completed and commenced multiple landmark transactions during the year, one of them being the sale of its Petrol business to EG Group that was finalised in April. The Group also notified about its intention to merge Endeavour Drinks and ALH, that will be followed by a value-accretive alternative or a demerger in 2020 calendar year. 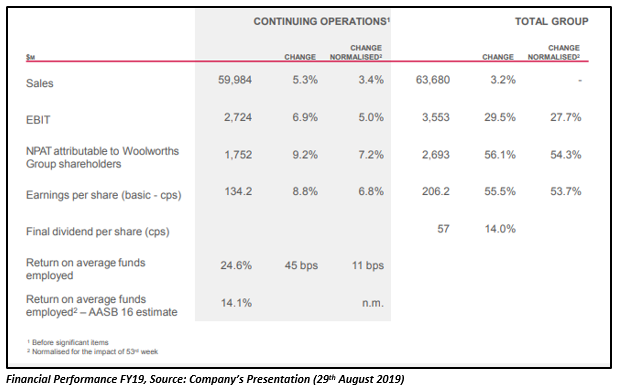 The Group announced a fully franked final dividend amounting to 57 cents per share in FY19, that brought its full-year dividend to 102 cents per share, denoting an improvement of 9.7 per cent on the prior year.

Headquartered in Perth, Wesfarmers Limited (ASX: WES) has grown into one of the largest listed companies of Australia since its origin in 1914. The Group covers diverse businesses, including office supplies; apparel and general merchandise; home improvement and outdoor living and an Industrials division with businesses in industrial and safety products, energy and fertilisers and chemicals.

The Group has recently informed about the launch of its new sustainability website via an ASX update. The website is dedicated to offering enhanced information and additional frequent updates on issues and areas vital to the Group’s persistent long-term performance.

During FY19, Group repositioned its portfolio by:

WES closed the trading session at $41.05 on 25th October 2019, with a rise of 1.21 per cent relative to the last closed price. The stock has delivered a substantial return of 107 per cent in the last ten years.

WiseTech Global Limited (ASX: WTC) is an Australian-headquartered company that develops and delivers software solutions to the logistics execution industry across the world. The company has a robust customer base, with more than 12,000 logistics companies in over 150 countries. The company’s leading platform, CargoWise One, executes above 50 billion data transactions each year and shapes an integral link in the international supply chain.

WiseTech published its annual report for the year ended June 30th, 2019 on 25th September 2019, reporting a strong revenue growth of 57 per cent on the prior corresponding period.

The company reported a revenue of $348.3 million in FY19 and mentioned that its revenue has grown at a CAGR of 49 per cent over the four years (FY15-FY19). The revenues of the company were of high-quality, with its recurring revenue being 99 per cent of total revenue for CargoWise One.

Attained Consistent Increase in NPAT and EBITDA Since FY17

The company notified that its FY19 results were fuelled by: 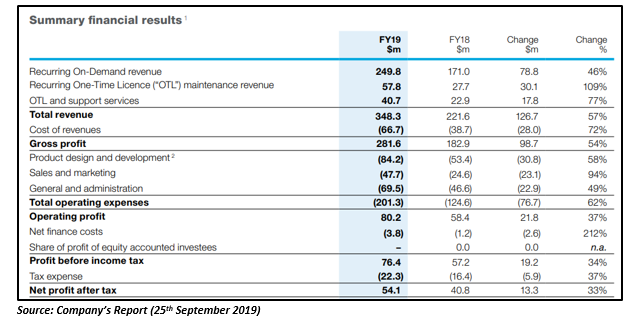 Announced a Dividend of 1.95 cps

The first bank and the oldest company of Australia, Westpac Banking Corporation (ASX: WBC) is one of the largest banks in New Zealand and one of four key banking organisations in Australia. The bank offers numerous services to its customers, including business and institutional banking, consumer and wealth management services.

Reported an Improvement in its stand-alone credit profile 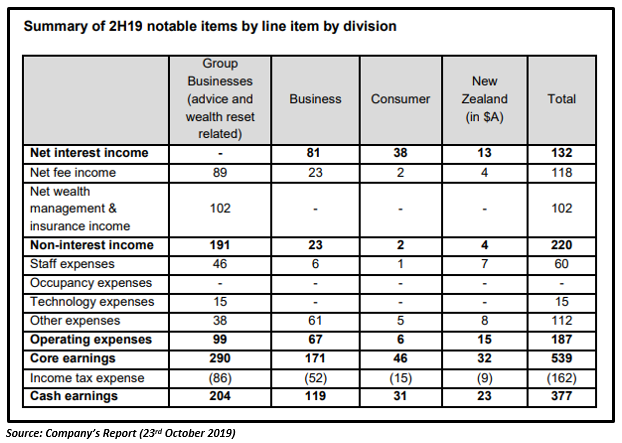 On 25th October 2019, Westpac informed that S&P Global Ratings has upgraded its stand-alone credit profile by one notch from ‘a-‘ to ‘a’. S&P has also boosted its Economic Risk assessment of Australia from 4 to 3.

S&P has increased the rating by one notch on certain capital instruments issued by Westpac, adding that the senior debt rating of Westpac is stable at AA-.

The bank also notified that out of $341 million impact on cash earnings, around 72 per cent is likely to be related to customer payments while the rest relating to costs linked with operating the remediation programs.

The bank expects the following changes in notable items in 2H19:

Owing to their significant importance in ASX, it would be interesting to keep a watch on any further updates on ‘W’ stocks.