Does Gold Investing Intimidate you? Discover the Right Parameters for Astute Judgement

The Bullions market is under pressure, which has left many investors in a dilemma concerning the investment in gold. If you are among those investors, you have landed at the right place, as the scope of the article would present facts, figures, and trend across the bullion market to help you with your decision-making process.

Gold Addition by the ETFs

Gold-backed ETFs and buying from the central banks across the globe to hedge against the dollar supported gold prices since the very first quarter of the year.

The global gold-backed ETFs added 40.3 tonnes of gold into the bucket, which represented a value of USD 1.9 billion.

While the addition of 40.3 tonnes during the first quarter remained 49 per cent higher on a Y-o-Y basis, the global gold-backed ETFs further added 67.2 tonnes of gold during the second quarter of the year 2019, which underpinned an increase of 99 per cent on a Y-o-Y basis.

The global gold-backed ETFs added 258.2 tonnes of gold during the third quarter of the year 2019, which took the overall gold holding to a record high of 2,855 tonnes in September 2019 and represented a value of USD 136 billion.

The quarter-on-quarter buying from the global gold-backed ETFs supported the gold prices, and gold breached USD 1,550 in September 2019.

The Push From the Central Banks

Central banks also added decent tonnes of gold in the wake of the U.S-China trade to hedge against the strong dollar. The central banks across the globe added 145.5 tonnes of gold during the first quarter of the year 2019, up by 68 per cent on a Y-o-Y basis.

The central banks again added 224.4 tonnes of gold during the second quarter of the year, up by 47 per cent on a Y-o-Y basis, which in turn, took the overall addition to 374.1 tonnes in the initial six months of the year 2019.

In the wake of high demand from the central banks and gold-backed ETFs, the production of gold across Australia rose, with high exploration expenditure.

To Know More, Do Read: ASX Gold Stocks At The Brim Of The Rejuvenating Gold Industry In Australia

Present Trend Across the Bullion Markets

After breaching the level of USD 1,550 in early September 2019, gold prices took a corrective phase and moved down slowly with consolidations in between.

However, the platinum and palladium market shinned relatively brighter amid high gold prices and changing trend towards the fuel cell technology.

To Know More, Do Read: Is the Time Right To Look At Platinum And Palladium Stocks On ASX?

What Could Support Gold Ahead?

The central banks across the globe are easing the monetary policies, which, in turn, is reducing the expected bond returns. In future, gold could emerge as a better portfolio diversifier as compared to bonds amid an increase in the negative-yielding debt along with the climbing stock-to-valuations to almost all-time highs. 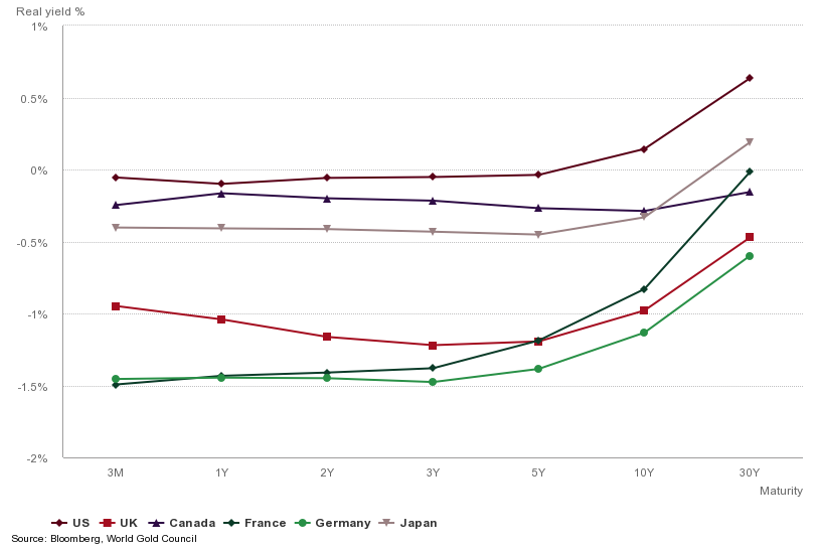 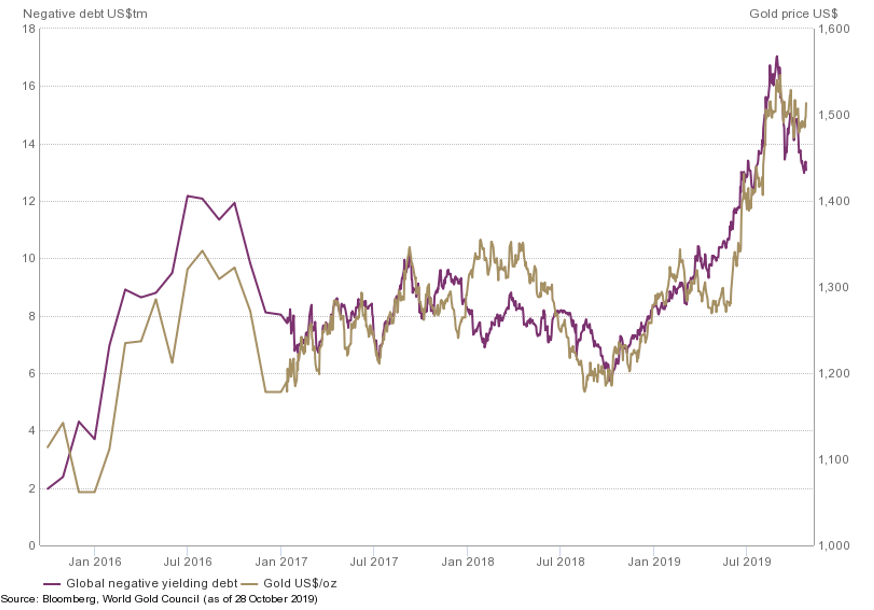 Thus, the increase in the number of negative-yielding debt could support the demand for gold ahead in the market.

While the probability of an increase in gold demand for portfolio diversification could take a push from the increase in negative-yielding debt; the global bond market for short to medium-term bonds is either providing negative yields or is flat across the base value as compared to the previous year. 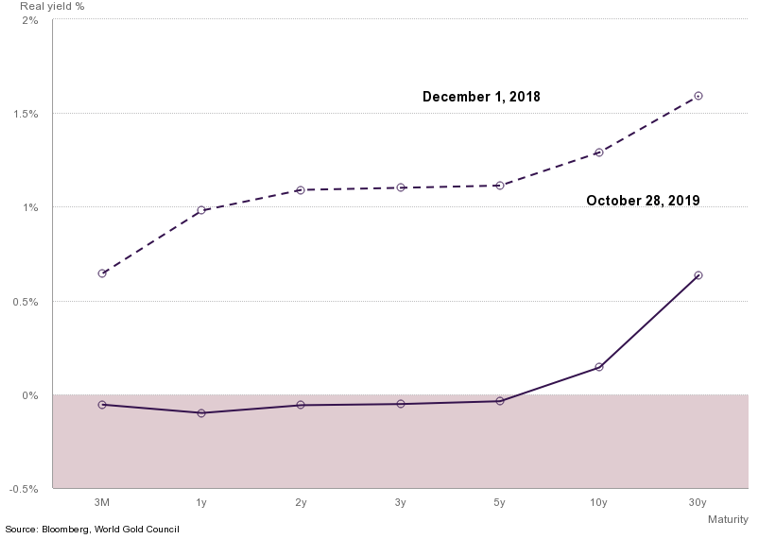 Thus, gold could provide enhanced returns as compared to the same safe asset class, which could push the demand for gold.

To track the overall market P/E, let us consider the Shiller's Cyclical Adjusted Price-to-Earnings (or CAPE), which is a cyclical adjusted price-to-earnings ratio of the S&P 500 Index, against the 10y Treasury yield.

While the CAPE is at the record high, the U.S. long-maturity (10 years) yields are moving inversely, which in turn, is taking CAPE/ US 10 Year Yields to the record levels, which further suggests that the market P/E is moving relatively very high against the prevailing interest rate environment.

An overvalued market relative to the prevailing long-term interest rate environment and the negative- yielding debt along with flattening bond yields across the short to medium-term bonds could support the gold prices against the bonds.

Factors that Could Dampen Gold Prospects Ahead.

The U.S. dollar index is again on an upsurge, and the dollar value is again taking the strength in the global market, which in turn, diminishes return for gold in other currencies; thus, could exhibit strong selling pressure.

The recent rally in gold prices has prompted many gold miners across the globe including the Australian gold miners to hedge their sales in the market, which could further exhibit selling pressure over the longer-dated gold futures contract, which in turn, could exert pressure on the gold prices.

To Know More, Do Read: Could The Power-Packed Quarter And Strong Hedge Book Boost The ASX-Listed Gold Miners To Outperform Gold Ahead?

The United States and China are instigating various rounds of trade talks to reach a mutual agreement for the trade, which once resolved, holds the potential to exert tremendous pressure on the gold prices.