ASX gold stocks are under the radar of the investors amid an impeccable performance demonstrated by the gold and gold companies on ASX. The Gold spot in Australia rallied from the level of $753.06 (low in July 2007) to the level of $2,322.26 (high in August 2019) and delivered a glittery return of over 208 per cent to the gold investors in terms of price appreciation.

Due to their positive correlation with the gold prices, the ASX gold stocks have also witnessed a power-packed performance.

To Know More, Do Read: A Glimpse Over ASX-Listed Top Performing Mining Stocks

While the gold prices are in consolidation on a daily time scale, the interest for ASX gold stocks is still high among the gold enthusiasts, and the investments in gold and gold-related products such as gold stocks, ETFs, gold schemes, etc., are growing by the day.

The ASX gold mining companies are taking leverage of the available capital offered by the investors, who want to defer their current consumption in anticipation of a higher return in future. While the gold investors remain bullish on gold outlook for the years ahead, in the prevailing economic conditions and geopolitical circumstances, which are supporting the gold prices for now

Many ASX gold companies are on an exponential development phase to increase their production capacity to capitalise on the high gold prices at the marketplace, which could be evident from the high capital exploration expenditure poured-in by the ASX gold companies.

Australian Gold Exploration Expenditure and Mine Production on an increase

The gold mine production in Australia soared by 6.3 per cent during the period of 2018-19 to stand at 321 tonnes amid a surge in production across several large gold mines in New South Wales and the Northern Territory.

The Cadia Valley in the New South Wales-operated by the Newcrest Mining Limited (ASX: NCM) witnessed a 52 per cent surge in the production level, and the production at the Cadia gold mine grew by 52 per cent to stand at 28 tonnes amid improved mill production time and throughput during the period of 2018-19.

The New York Stock Exchange-listed- Newmont Goldcorp Tanami mine in Australia underpinned a production growth of 13 per cent to stand over 16 tonnes in the period from 2018-19 amid improved ore grades.

However, the Superpit gold mine in Kalgoorlie, Western Australia saw a decline in production during the same period, and the production fell by 36 per cent to stand at 15 tonnes as the rockfall incident in mid-May 2018 limited the access to the mining area, which prompted the Joint Venture of the global mammoths- Barrick Gold and Newmont to process lower grades.

To Know More About the Cash Rich Superpit Gold Mine, and Voices over its Acquisition by the Australia Miners, Do Read: Barrick Gold to Offload its Kalgoorlie Superpit Stake; Cash Rich Australian Miners in Focus

While we have gazed upon the past performance of the Australian gold mines, let us now divert towards the future expectations and industry anticipations.

Australia is the second-largest gold producer across the globe, and the gold industry in the continent is experiencing a production revival.

The high gold prices in the domestic as well as in the international market are promoting the re-opening of the closed mine as well. The Stawell mine, which operated for 35 years till 2016 in Victoria was restarted by the new owners- Arete Capital Partners in January 2019. The Morning Star gold mine in Victoria also restarted in April 2019.

The measures taken by the ASX gold companies to improve the production capacity at the individual level in Australia is supporting the gold export and earnings outlook for Australia over the years ahead.

The DIIS forecast stands tall, and the department anticipates the export earnings to surge by 33 per cent in 2019-20 to stand at $25 billion, which would further mark a record export value. The department anticipates that the higher export earnings would be supported by both the higher value for gold in the market and higher volume delivered by the ASX gold companies.

However, the department also predicts a recovery in domestic currency during the period of 2020-21, which would reduce the export revenue by 4.2 per cent at $24 billion. 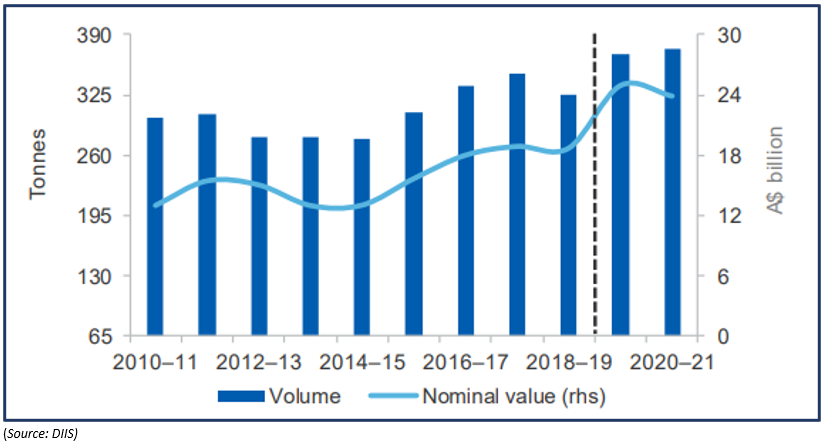 Potential Risks to the Forecast

The key risk with the DIIS forecast is the stringent import policies adopted by China, which recently have impacted the ASX coal stocks.

China is the key market for the Australian gold industry, and the recent import restriction imposed by China to preserve the capital outflow and strengthen the domestic currency could be problematic for the ASX gold companies.

Chinese State Administration of Foreign Exchange imposed restricted licences to pay for gold import by not issuing licences to sell the Renminbi for US dollars in June 2019, which created a gold backlog across the secure warehouses, which further reduced the import of the Australian gold in China.

The impact of the stringent policy is still a mystery; however, the polices are harmful to the outlook of gold in Australia.

To Conclude, Australia gold mines are ramping the production, and the increase in the number of new mines is supporting the gold revival in Australia. The expenditure in gold exploration is at a record high from 2008 as the ASX gold companies are taking the leverage provided by investors in anticipation of bumper returns ahead; however, China’s import policies could wash away the investors hope, but like coal, gold could also be diverted by the Australian players toward the high consumption market.

[Worried about Stock Market Crash? Learn how to Invest in Gold Stocks]