While Coronavirus has impacted almost every sector, the Australian banking industry is in a state of flux. Banks and relevant authorities are taking all suitable steps to minimize the risk arising from the economic slowdown. The credit rating agencies such as Fitch and S&P Global Ratings are taking into consideration the adverse effect of COVID-19 on banks and have recently revised the credit ratings of few banks. APRA has also asked banks to delay their decision on dividend distribution. Although dividend is a major attraction for many investors, banks are withdrawing their dividend distribution as a prudent approach.

In this context, let us look at four big Australian banks and their recent financials, announcements on dividend distribution decision and other crucial activities.

CBA in its half yearly FY 2020 results for the period ended 31 December 2019 had declared an interim dividend of $2 per share. The interim pay-out ratio stood at 79 per cent of cash NPAT. Also, the Company mentioned that it targets the full year pay-out ratio to lie in the range of 70 – 80 per cent. Now with the COVID-19 impact on the economy, the dividend pay-out plans of the company could be in shambles.

On 1 April 2020, CBA provided an update on divestment of CommInsure Life, its Australian life insurance business to AIA Group Limited. Under the revised transaction path, Commonwealth Bank has obtained further proceeds of around $865 million. In 1H FY 2020, the Bank received $740 million of proceeds, which brings the total proceeds to $1.6 billion.

As a result of coronavirus pandemic, the number of doubtful or bad debts are most likely to rise for banks. We will only get to know the present financial situation of CBA and its plans to deal with the COVID-19 situation once the bank releases its third quarter results on 13 May 2020.

On 11 May CBA received final approval from the regulators for the divestment of 80% stake in PTCL- CBA’s Indonesian life insurance business. The deal is anticipated to complete in June 2020.

WBC recently released its interim results for six months period ended 31 March 2020. The Company made a prudent decision on deferring its dividend distribution. Following APRA’s guidance on dividends, the bank stated that it will not pay a dividend in June 2020.

However, for FY 2019 the bank delivered a fully franked interim and final dividend of 94 cps and 80 cps, respectively.

For the coming 6 months, Westpac is continuously evaluating the uncertainty in economic situations. Albeit, WBC assures that it will continue to evaluate opportunities for improving its capital utilisation throughout the Group.

ANZ recently released its half year FY 2020 results for the period ending 31 March 2020, and the bank has deferred its decision on interim dividend. ANZ mentioned that further update on dividend will be provided in August 2020. In FY 2019, the bank was able to deliver the dividend of 80 cents per share in both half yearly results. 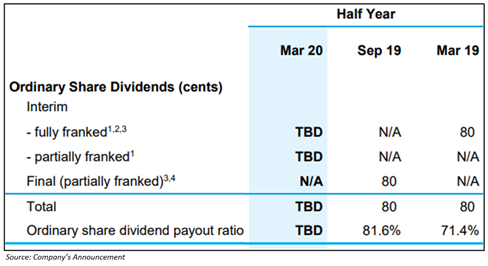 COVID-19 has had a material impact on the results, key highlights are as follows.

In the March 2020 half-year period, ANZ recognized $1.7 billion pre-tax of credit impairment charge. Due to COVID-19, the bank suffered $815 million impairment loss on two of its Asian investments.

The bank had declared a fully franked dividend distribution of 30 cps for six-month period ended 31 March 2020. Record date for determining entitlements to the dividend was 4 May 2020 and payment date is 3 July 2020. Although the revenue and NPAT were down by 2.7 per cent and 51.3 per cent, respectively. 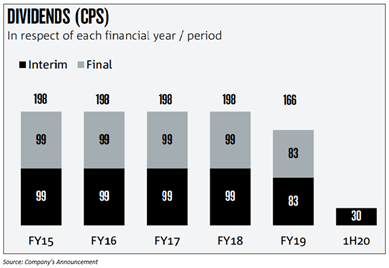 The bank stated that more than 1.5 million customers visited its online support site for COVID-19. NAB offered up to 10 business days leave to all its colleagues and nearly 81 per cent of them were working remotely.

The bank provided an economic outlook for Australia, where it stated that the country’s GDP is likely to dip by 8.4 per cent by September 2020 as compared to December 2019. Unemployment is likely to peak at 11.7 per cent in mid-2020 and expected to improve to 7.3 per cent by December 2021.

How can EarlyBirds help in decarbonising global shipping through innovative solutions?

Why take-home pay of Aussies could fall from July 1?

How to create wealth for personal trainers? - Expert talks with Tristan Rushworth