Commonwealth Bank of Australia (ASX:CBA) has released half-year results for the period ended 31 December 2019. It has made progress towards becoming a simpler bank with divestments and emphasis on its core business verticals.

CBA declared a fully franked interim dividend of $2 per share, flat on the 1H19 interim dividend, reflecting a payout of 79 per cent against cash NPAT. It is payable on 31 March 2020 to the shareholders in records on 20 February 2020.

Since 2018, the bank has been simplifying its structure with divestments. CBA has completed divestments of Sovereign, TymeDigital, Colonial First State Global Asset Management (CFSGAM), and Count Financial.

Divestments are underway for PT Commonwealth Life, BoCommLife, and CommInsure Life, expected to be completed in the second half of FY20. In November 2019, the bank had transferred full control of CommInsure Life to AIA.

For its aligned advice verticals, the bank would complete assisted closure of Financial Wisdom in the second half of FY20, and cessation of CFP-Pathways is anticipated to completed during the same period as well.

CBA would be undertaking a strategic review of General Insurance and Vietnam International Bank. It is committed to divesting Colonial First State, Aussie Home Loans and stakes in Mortgage Choice, CountPlus.

Innovation is continuing to improve the customer experience through its specialised venture capital arm – X15 Ventures. It is said that X15 would launch around 25 ventures in the next 5 years.

Klarna – CBA’s shop now pay later service was integrated into the CommBank mobile app, while additional services have been introduced to its Everyday Banking, Home buying and Business/Private verticals. 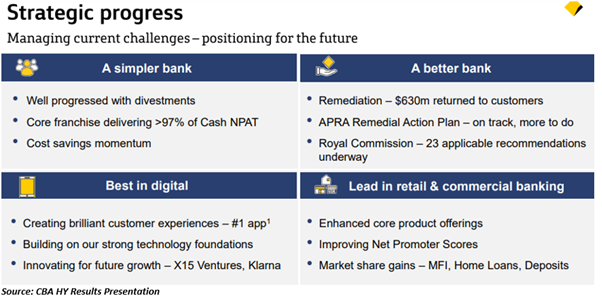 Cash net profit after tax from continuing operations was down $199 million or 4.3 per cent as against $4,477 million in the previous corresponding period. A lower cash NPAT was primarily due to an increase in operating expenses, and over 10 per cent increase in loan impairment expenses.

Non-core businesses – fund management and insurance – posted subdued results. Income from fund management business was down 14.2 per cent due to cessation of fees, commissions and repricing initiatives. Insurance income suffered a fall of 54.4 per cent as general insurance businesses witnessed escalated claims due to bushfires.

Operating expenses of the bank increased 2.6 per cent owing to wage inflations, higher spending in risk & compliance FTE, IT and customer remediation.

Common Equity Tier 1 was above the regulator’s guidelines, and it improved by 100 basis points from June 2019. This improvement was driven by previously announced divestments, organic capital, removal of the General Reserve for Credit Losses regulatory adjustment. These CET 1 gains were partially offset by the change from SA-CCR, AASB 16, and investment in Klarna.

CBA fulfilled its funding needs from customer deposits, comprising 71 per cent of total funding at the end of the period, which was 69 per cent in the previous corresponding period.

It was noted that the level of liquid assets and customer deposit growth was managed appropriately to maintain strong funding and liquidity positions. Thus, the bank’s liquidity coverage ratio and net stable funding ratio was well above regulatory guidelines.

It was said that asset quality was strong despite a loan impairment expense of 649 million. Loan loss rates as a percentage of gross loans and acceptances increased 2 basis points to 17 basis points.

CBA said stress is present in the discretionary retail, agriculture and construction sectors, and prudent levels of provisioning were made with total provisions of $5,026 million.

Australian economy has favourable long-term fundamentals that provides the stimulus, including rising population, strong fiscal and trade position, and a pipeline of infrastructure investment.

He noted that recent favourable pick-ups in the indicators of the economy, including housing and employment, depict the country’s economic resilience.

While there are uncertainties to the global economic outlook, the bank is cognizant of impacts of drought and bushfires. Amid this environment, CBA remains committed in core businesses as well as continued execution.

CBA has the appetite and capacity to lend more in an effort to support its customers and the economy. There would be investments in innovation and growth to derive new opportunities for the business and deliver the best outcomes for customers.